After Liu Genghong became popular, we chatted with the "pusher" behind him 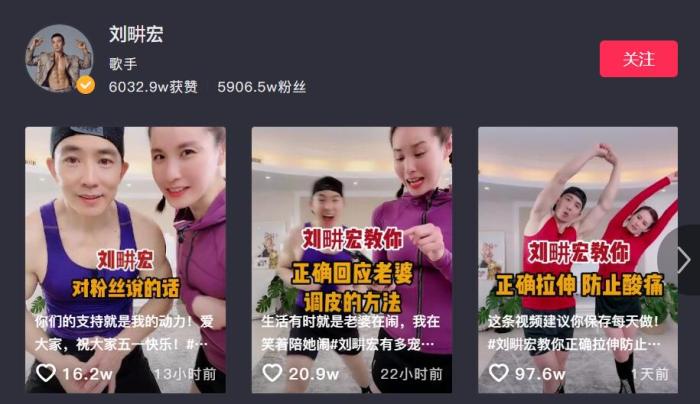 Zhongxin Finance, May 2 (Reporter Song Yusheng) In the past April, fitness live broadcasts and shuttlecock dancing seem to have become topics that many people cannot avoid.

At the same time, the "pusher" behind Liu Genghong, an MCN company, has also begun to attract people's attention.

Recently, Lei Binyi, founder and CEO of Worry-free Media, accepted an exclusive interview with a reporter from China-Singapore Finance and Economics, and told Liu Genghong's popular process from his perspective.

The following is the interview transcript:

: Liu Genghong has gained a lot of exposure on the Internet recently. What influences do you think his popularity benefits from?

: I think the first thing is his own conditions.

Liu Genghong made his debut as an artist relatively early, and at the same time focuses on fitness, and has been a star fitness coach for more than 30 years.

So he is very professional in the field of fitness.

Moreover, his family is very happy, the husband and wife are loving, and there are three children in the family, which has become a plus point for his popularity.

From the perspective of the general environment, the whole society is very enthusiastic about fitness and sports.

Especially after the Winter Olympics, the enthusiasm for fitness continues to rise.

Just at this time, Liu Genghong led everyone to exercise.

Although he speaks more professionally, it is all accessible to the general public.

At the same time, recently, some people have to stay at home due to epidemic prevention and control.

Liu Genghong's fitness live broadcast has indeed become a way for everyone to entertain and exercise in this environment.

In fact, he is not simply teaching everyone the skills of fitness, but more importantly, fitness also brings happiness.

A lot of people told me that they just finished an hour of practice with him happily.

So I think there are multiple reasons for his popularity, which are influenced by many factors.

: According to reports, in December 2021, Liu Genghong signed a contract with MCN, and the agency planned to operate the account.

It was only in February this year that Liu Genghong began to transform into a fitness live broadcast. What was the plan for Liu Genghong's account at that time?

: When we first signed Liu Genghong, we thought he would be able to do it.

Initially, our positioning of Liu Genghong's short video account was his family life.

From the end of December last year to February this year, the content of his account was more about family life and healthy life.

Because he has also done live broadcasts for a while before.

It was a combination of the two at that time.

After seeing the interests of users, we decided not to do live broadcasts for the time being.

So in March, he began to take everyone to exercise regularly.

There are about 5 live broadcasts every week. Except for Saturday, which is broadcast in the morning, the other days are broadcast at 7:30 in the evening.

At that time, he also had a fan base on Douyin, and we also strengthened private domain operations in this regard.

If you have any questions about fitness, you can communicate in the group.

Later, around April 7, there was further growth.

So I think this is still a process of accumulation.

: After Liu Genghong became popular, what plans for future development can you reveal?

: The recent plan is to focus on bringing you fitness and healthy living content.

As for more considerations, it may be determined after this round of epidemic is over, and the long-term plan needs to be discussed further later.

: Some people say that while MCN enjoys industry dividends, it also faces the test of development.

What do you think about this?

: I think it is very normal for the state to strengthen supervision or the society to raise higher expectations for this industry when more and more people are paying attention and participating in this industry.

I have always believed that it is normal for people to place higher demands on our industry.

After all, always go the right way to go further.

: Do you think that Liu Genghong's popularity is more accidental, or is there an operational logic that can be used for reference?

When we signed Liu Genghong, he had 1.35 million fans.

From March until before he danced in a down jacket, he had about 3.5 million followers.

There is some operational logic to this.

We have also accumulated some experience in this area.

In the past, we have also discovered or supported "out-of-the-circle" celebrities like "Sister Mao Mao".

In this process, we have gained a lot, and we have also stepped on a lot of pits.

Of course, Liu Genghong's popularity is due to accumulation.

I think that no one can replicate that he can become super popular and become a phenomenon like him.

I have always believed that phenomenal levels cannot be replicated.

My answer at the time was that there is no possibility of the next "Superfluous and Sister Mao Mao", because every phenomenal content, real super head, cannot be copied.