Hoarding vegetables, the freezer may lose to the balcony? 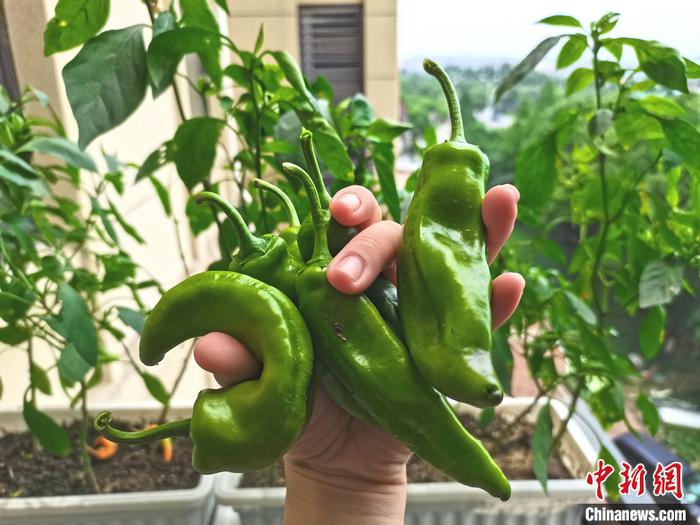 Editor's note: This is the People's Livelihood Investigation Bureau.

Zhongxin Finance, April 28 (Reporter Xie Yiguan) Recently, the topic of "Why young people like to grow vegetables more and more" has been on Weibo hot search.

The answers are varied.

Relying on the "vegetable gene" flowing in their blood, people living in buildings make full use of their small balconies and become "urban farmers" one after another.

Vegetables harvested on the balcony.

Are you still stocking up?

I have started growing vegetables on the balcony

Recently, many reports of people hoarding and buying daily necessities in large and small bags have been screened in the circle of friends.

"Because I especially like to eat coriander, I bought coriander seeds a few days ago and sprinkled them into the planting box." Xiaoyu, who works in Beijing, told a reporter from Zhongxin Finance and Economics.

But because I don't have much experience in many kinds of vegetables, "a lot of them didn't germinate, and they didn't grow very well." Recently, Xiaoyu bought the seeds of colorful peppers and was going to try to grow them.

In the city, more and more "Xiaoyu" have turned the balcony into a "vegetable garden".

Sita, who lives in Ningbo, Zhejiang, calls herself a "post-95 balcony farmer".

"The first time I came into contact with growing vegetables on the balcony was in the summer of 2018. At that time, due to the pressure of the postgraduate entrance examination, I accidentally found that pulling peppers was very stressful, so I had the idea of ​​growing my own vegetables." Sita told reporters that she bought a house in 2020. Afterwards, a small "vegetable field" was planned on the balcony.

Now in Sita's vegetable field, in addition to the peppers and tomatoes that must be planted every year, there are also perilla, spinach, coriander, garlic, green onions, etc.

Sita also spends half an hour looking at her vegetables every day.

Seed sales have soared, and some people have spent thousands of yuan on vegetable planting machines

The enthusiasm of the Chinese for growing vegetables can also be seen from the sales of seeds on e-commerce platforms.

A reporter from Zhongxin Finance and Economics found that some seeds that are favored by consumers can sell tens of thousands of copies per month.

The owner of this 12-year-old shop is from Shouguang, the "hometown of vegetables".

"In 2021, the sales volume of seeds and seedlings plus various related supplies will reach about 30 million. Fruit corn seeds, Beibei pumpkin seeds, tomato seeds, etc. are sold well, which will change with the season." Hezhiyuan Seeds The person in charge of the industry told Zhongxin Finance and Economics reporter that since January this year, store sales have increased by about 30%-40%.

A recently released "2022 Balcony Vegetable Planting Report" also shows that in the first quarter of this year, the sales of various vegetable seeds on Taobao Tmall platform increased significantly year-on-year, and the number of seed purchasers increased by more than 100% for three consecutive years.

From the perspective of purchasing cities, Beijing has the largest number of buyers, followed by Shanghai and Hangzhou.

According to the report, coriander seeds are the best sellers, followed by leeks, watermelon, peppers, tomatoes, and cherry radish seeds.

On the Taobao platform, sales of a smart vegetable planter have increased by more than 200% this year compared to the same period last year.

Tomatoes growing on the balcony.

Why is it possible to grow vegetables on the balcony?

Sita said that she fell in love with planting vegetables because it can bring a sense of decompression and healing, so she also paid more attention to the process of planting and harvesting, and gradually experienced the natural law of spring planting and autumn harvesting, and also cultivated her patience.

"So even if I have a very small space for 'growing vegetables', and it is only as big as two air conditioners, even if all the vegetables are harvested, I will only cook two plates at most, but I will still insist on planting every year." Sita said.

"After the epidemic, everyone also hopes to get closer to nature and find some inner comfort by growing vegetables on the balcony." Qin Huai, owner of the Marseed store on the e-commerce platform, told Zhongxin Finance and Economics reporter.

"Growing vegetables on the balcony, as a hot phenomenon, is inseparable from the development of the country's economy and society." Han Yijun, director of the National Agricultural Market Research Center of China Agricultural University, told the reporter of Zhongxin Finance and Economics, "With the rapid development of the country's economy, residents' consumption is also With continuous upgrading, when material consumption is satisfied, spiritual consumption demand will grow rapidly.”

"In the past 40 years, China has been in a stage of rapid development and rapid transformation, and some social anxiety has also arisen in this rapid transformation. In the fast-paced urban life, how to relieve anxiety, growing vegetables on the balcony is a very good way , it will bring a sense of pleasure, a sense of fulfillment and a sense of achievement, etc. At the same time, the epidemic control has also strengthened people's demand for vegetables on the balcony." Han Yijun said.

Growing vegetables on the balcony, a large market of tens of billions?

In Qinhuai's view, growing vegetables on the balcony is a new way of life and hobby. "Balcony Party" can find the little pleasures and happiness of life through growing vegetables, and for businesses, there are also new business opportunities.

Some people from e-commerce platforms said that such an interest economy has now formed a new "ten billion market" scale, and commodities cover the entire life cycle of fruit and vegetable growth.

"As a platform, we are promoting the diversification of seed categories, allowing businesses to transform or expand new categories, and continue to introduce some fruit and vegetable varieties suitable for the family environment." The person in charge of Tmall Taobao's flower industry told reporters.