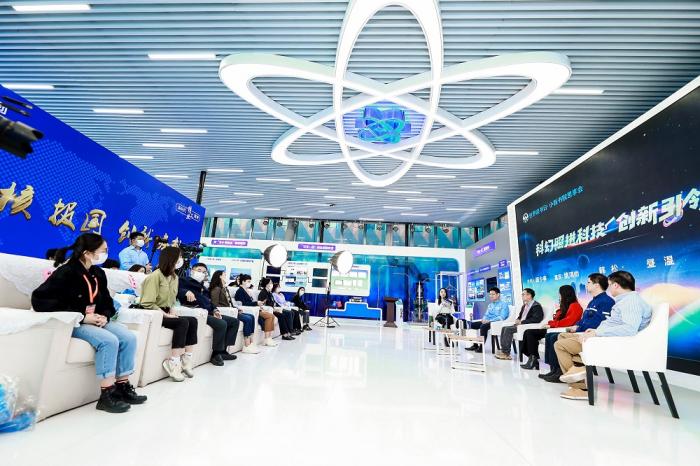 Yan Yong, deputy director of the Information Center of the State-owned Assets Supervision and Administration Commission of the State Council, introduced the origin and effect of "science fiction writers entering new state-owned enterprises".

Technology meets science fiction, which stimulates the innovation vitality of central enterprises and creates new possibilities for a better life in the future.

Wu Wei, Secretary of the Party Committee and Director of the Publicity and Culture Center of China National Nuclear Corporation, shared the role of the internal cultural mechanism represented by science fiction in promoting technological innovation of enterprises. He believed that science fiction can guide thinking ability, innovation ability, and cultivate innovation soil.

He mentioned that state-owned enterprises are the main force and pioneer of scientific and technological innovation in my country, and have always been the subject of great concern in the science fiction community.

The cooperation between state-owned enterprises and sci-fi writers to popularize science and spread knowledge through sci-fi creation has strong practical significance for improving national innovation ability and scientific literacy.

He believes that the shocking feelings that many science fiction novels bring to us are actually the reproduction and extension of spiritual experience when facing the miracle of human technology.

These novels were created by science fiction writers after visiting and experiencing the most advanced and grand scientific and technological projects in China. They brought those future visions that have arrived but not yet popularized to our eyes.

Science fiction writer Li Wen reviewed the personal experience of walking into the photovoltaic industrial park of SPIC in Qinghai, and conceived a high-sensitivity optoelectronic material for space flight in the novel.

Science fiction writer Kang Jinhuan introduced that in his novel, he conceived the story of a central enterprise photovoltaic power generation base and environmental meteorological experts working together to solve climate problems.

Zhang Zhi, deputy general manager and senior engineer of State Power Investment Smart Energy (State Nuclear Power Institute), believes that such sci-fi ideas are likely to be realized in the near future, and some have already become reality, and invited sci-fi writers to continue to enter State Power Invest to learn more about comprehensive smart energy.

Science fiction writer Han Song believes that when writers go to state-owned enterprises to gain inspiration and experience modern technology, they can create sci-fi with real hard-core value, and use their works to promote my country's scientific and cultural self-confidence.

During the interactive discussion, the guests formed a consensus that science fiction and technological innovation are a double-helix relationship. Writers are imagination, and central enterprises are creativity. The two inspire and promote each other.

Since its establishment in 2022, Xiaoxin Academy has organized a number of knowledge sharing salons.