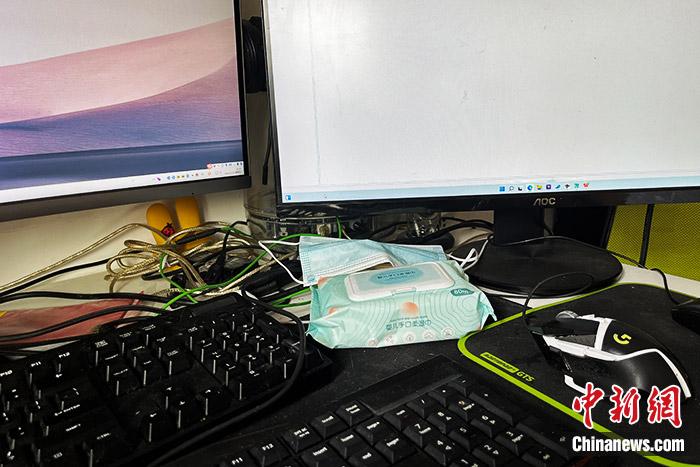 Zhongxin Finance, April 24 (Ge Cheng) There are insufficient staff, the production line is facing the "embarrassment" of single-shift production, the production capacity cannot be increased, and the employees cannot be "fished"... Some enterprises in Shanghai are facing new situations for resuming work and production.

Previously, companies that had resumed work and production on Shanghai's "White List of the First Batch of Key Enterprises" encountered new problems.

Now, what should I do?

With two screens and two keyboards, working from home has become a compulsory course for many migrant workers.

On the labor side, some employees face offline "difficulty in returning to work"

Mr. Shi (pseudonym) who lives in Shanghai is the relevant person in charge of an auto parts company in Shanghai.

He told Zhongxin Finance that during the epidemic, they mainly worked remotely online.

In the office process, there are occasional problems of poor communication, but the basic work can still be completed.

"We are mainly responsible for business, and most of our work communicates with customers, mainly involving the specific supply quantity, arrival time of goods and other information. The company's products cover many regions such as East China and South China." Mr. Shi said that during more than 20 consecutive days at home, , the online office has been uninterrupted.

However, Mr. Shi is not sure whether he can go to the company to work in the future.

He said he has consulted with his community but has not received a specific response.

After returning to work, it is "unknown" whether he can go home again.

An employee of a Shanghai car company said in an interview with the media earlier that at present, the company's notice requires that the building where the employee who wants to resume work must have no positive infection within 7 days, and must also hold the company's employment demand certificate and "white list". "Enterprise certificate and 48-hour nucleic acid negative certificate should be applied to the village neighborhood committee. After review, an antigen test must be done, and it will be released if there is no problem.

There are also business leaders who said that it is difficult to "fish out" employees from the closed community.

Zhongxin Finance has noticed that at this stage, some companies in Shanghai still use a single-shift work system, and the small number of returning workers directly restricts the increase in production capacity of the companies.

SAIC Motor's Lingang Passenger Vehicle Factory completed the first vehicle under the pressure test of resumption of production and rolled off the assembly line.

At the same time, in terms of logistics, the resumption of work and production has also encountered some obstacles.

"Our factory is located in Anhui, and our products include automotive powder metallurgy, compressors, etc. In the past, shipments were sent directly from the factory to Shanghai, and the factory could arrange the delivery time in advance according to customer requirements. Recently, the factory has been unable to grasp the logistics situation and can Whether it will arrive on time is also unknown." Mr. Shi told reporters.

Taking Mr. Shi's automobile manufacturing industry as an example, it is difficult to support the full resumption of production by relying only on stock parts.

The smooth flow of the follow-up logistics chain is crucial to the continuous production of car companies.

The relevant person in charge of SAIC Group's Lingang Base also told Zhongxin Finance: "The resumption of work and production still faces many challenges and uncertainties. The stability of the supply chain will determine the speed of production capacity ramping."

Companies are also actively responding to these problems.

The person in charge said: "At present, we have surveyed nearly 400 suppliers, and have conducted a comprehensive survey of the supplier's capacity, inventory, raw materials, etc. At the same time, the company is also paying close attention to the personnel dynamics and production conditions of lower-level suppliers. etc. As far as possible, assist and support lower-level suppliers in accelerating the process and resuming production.”

In the face of the two "difficulties" in personnel and logistics that enterprises are currently facing when they resume work, relevant authorities and enterprises are already actively responding.

The Ministry of Industry and Information Technology is instructing local industry and information technology authorities to refine the guidelines for epidemic prevention and control of industrial enterprises, organize production in accordance with "one enterprise, one policy" and "one park, one policy", and actively, steadily and orderly promote the resumption of work and production of key enterprises, including guiding local governments. Simplify the approval process and

In Shanghai, there are some employees in key positions. Although they are in the closed control area, there are no positive cases in the building for 7 days. If they have a negative nucleic acid within 48 hours, the Shanghai Municipal Commission of Economy and Information Technology has formulated measures

In terms of logistics, on April 18, the transit station (Zhejiang-Shanghai) for the emergency supply of important materials in the Yangtze River Delta, which was constructed and operated by SAIC Anji Logistics Co., Ltd., was officially opened.

The emergency supply transfer station for important materials in the Yangtze River Delta will implement closed-loop management and "contactless" delivery throughout the whole process. It can guarantee the transfer needs of 30 vehicles of more than 20 tons per day, ensure the smooth transportation of materials, and effectively help the stable operation of the regional industrial chain supply chain.

Compared with roads, waterways are less affected by the epidemic.

According to reports, shipping companies such as COSCO SHIPPING and SIPG have quickly launched the services of "land-to-water" and "sea-rail combined transport", making every effort to smooth the supply chain logistics.

During the epidemic, 977 key personnel of COSCO SHIPPING Group were on duty on site, making every effort to ensure that the services of more than 1,400 ships sailing around the world, 58 invested terminals and global routes are not chaotic.

The press conference on the prevention and control of the new crown pneumonia epidemic in Shanghai held on April 22 revealed that in the past week, 70% of the 666 key enterprises have resumed work and production, and the capacity utilization rate of enterprises has been continuously improved.