The first RRR cut in 2022 is here! Who will benefit from the release of 530 billion yuan?

Zhongxin Finance, April 15 (Reporter Li Jinlei) The expected RRR cut has really come.   On April 15, the central bank announced that it will reduce the deposit reserve ratio of financial institutions by 0.25 percentage points on April 25, 2022 (excluding financial institutions that have implemented a 5% deposit reserve ratio).   In order to increase support for small and micro enterprises and 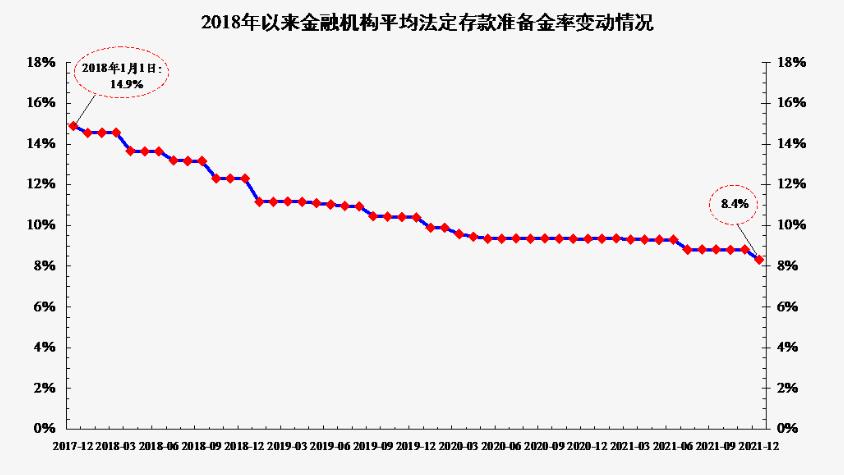 In order to increase support for small and micro enterprises and "agriculture, rural areas and farmers", for urban commercial banks that do not operate across provinces and rural commercial banks with a deposit reserve ratio higher than 5%, on the basis of reducing the deposit reserve ratio by 0.25 percentage points, An additional 0.25 percentage point drop.

After this cut, the weighted average deposit reserve ratio of financial institutions was 8.1%.

Before this cut, the weighted average deposit reserve ratio of financial institutions was 8.4%.

This RRR cut is a comprehensive RRR cut, releasing a total of about 530 billion yuan in long-term funds.

The last time the central bank cut the RRR was on December 15, 2021, when it cut the RRR by 0.5 percentage points across the board, releasing about 1.2 trillion yuan of long-term funds.

In fact, there were already "announcements" before this RRR cut.

The executive meeting of the State Council held on April 13 decided to encourage large banks with relatively high provision levels to reduce their provision coverage ratio in an orderly manner in response to changes in the current situation. Increase financial support for the real economy, especially industries severely affected by the epidemic, small, medium and micro enterprises, and individual industrial and commercial households, make reasonable profits to the real economy, and reduce the comprehensive financing cost of enterprises.

Why downgrade at this time?

The background of the RRR cut at this time is that the current world situation is complex and evolving, domestic epidemics have frequently occurred recently, and some unexpected factors have exceeded expectations, bringing greater uncertainty and challenges to the smooth operation of the economy.

The real economy, especially the industries and enterprises seriously affected by the epidemic, have encountered many difficulties.

The second is to guide financial institutions to actively use RRR cut funds to support industries and small, medium and micro enterprises severely affected by the epidemic.

Dong Ximiao, chief researcher of China Merchants Union Finance, told Zhongxin Finance that affected by many internal and external uncertainties, the downward pressure on my country's economy is still relatively large, and stable growth has been placed in a more prominent position.

At present, the weighted average deposit reserve ratio of financial institutions in my country is 8.4%, which is significantly higher than that of developed economies, and there is still some room for reduction.

Therefore, it is necessary and necessary to continue to reduce the deposit reserve ratio, and it is of importance and urgency.

What is the impact of the cut?

The RRR cut means that the money locked by the central bank in accordance with the law of commercial banks has decreased, and the money that can be used freely has increased accordingly.

——The real economy is expected to receive more "blood transfusions"

Wen Bin, chief researcher of China Minsheng Bank, pointed out to Zhongxin Finance that in the context of the current triple pressure on economic development, the central bank has played the dual functions of the total amount and structure of monetary policy tools, and timely RRR cuts reflect the forward-looking monetary policy and are conducive to stability Market expectations have enhanced the confidence of market players, improved and expanded aggregate demand, and created positive conditions for stabilizing the macroeconomic market and keeping the economy operating within a reasonable range.

Wen Bin believes that the RRR cut will increase the currency multiplier, expand the bank's credit derivation capacity, and combine with structural monetary policy tools to continue to increase support for key areas and weak links such as small and micro enterprises, technological innovation, and green development; At the same time, the RRR cut will also optimize the term structure of funds in the banking system, release long-term liquidity, reduce the cost of bank liabilities, and help encourage and guide financial institutions to continue to reduce the financing cost of the real economy.

In Wen Bin's view, for the stock market,

At the same time, it will promote banks to do a good job in asset and liability management and increase the allocation of interest rate bonds. It is expected that the yield of treasury bonds will remain stable and moderate, and will drive down the financing cost of corporate bonds.

The central bank said it will continue to implement a prudent monetary policy.

The second is to pay close attention to the adjustment of monetary policies of major developed economies, taking into account internal and external balance.

At the same time, maintain a reasonable and sufficient liquidity, promote the reduction of comprehensive financing costs, and stabilize the macroeconomic market.

Dong Ximiao believes that the next step is to continue to make good use of the aggregate monetary policy tools, maintain a moderate growth in the money supply, and enhance the stability of credit growth.

At the same time, the role of structural tools should be highlighted, such as making good use of targeted RRR cuts, re-lending, re-discounting, and inclusive small and micro loan support tools, etc. The precision and directness of monetary policy.

Will there be a rate cut in the future?

although the MLF policy interest rate remains unchanged this month, the RRR cut may prompt the LPR quotation line to reduce the spread, and the LPR interest rate is expected to be lowered on the 20th of this month.