Financial people under the epidemic in Shanghai: build ground floor in the computer room, stay behind for more than 15 days, and store 248 catties of fruit in logistics

China-Singapore Jingwei, March 30th (Ma Jingweiwei) took out the computer from the computer room overnight, rushed to the unit at midnight before the closure, set up a folding bed in the office... Recently, Shanghai financial practitioners' "closure control" "Life" once swiped in the circle of friends.   Zhang Linfang of the Information Technology Department of Huaxin Securities is in charge of 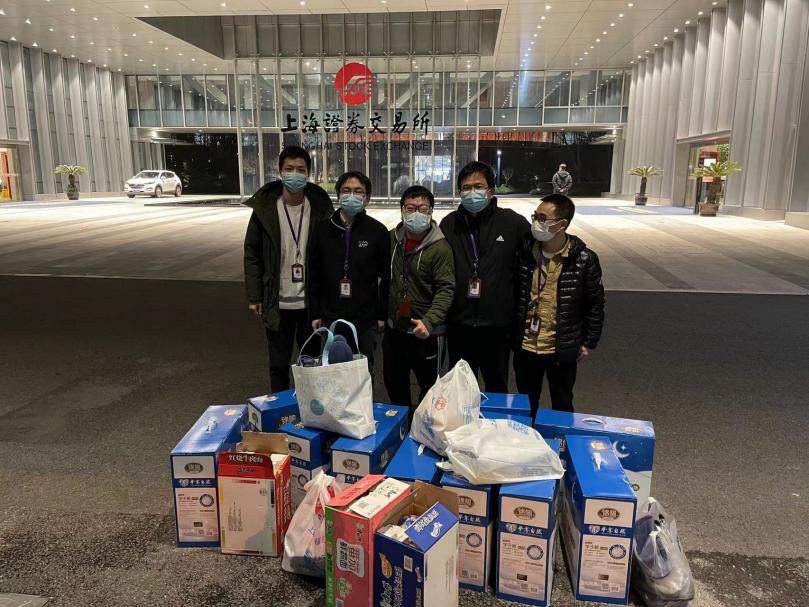 China-Singapore Jingwei, March 30th (Ma Jingweiwei) took out the computer from the computer room overnight, rushed to the unit at midnight before the closure, set up a folding bed in the office... Recently, Shanghai financial practitioners' "closure control" "Life" once swiped in the circle of friends.

Zhang Linfang of the Information Technology Department of Huaxin Securities is in charge of the stay arrangement of the employees in the department. He told Sino-Singapore Jingwei that the company implements an AB rotation system and changes every Monday, but some colleagues cannot be on duty due to the closure of the community and other reasons, and colleagues who are waiting for shifts will continue to work In addition, affected by the blockade and control, some employees stayed in the unit for more than 15 days. Although there are fewer people working on site, "but I feel that the team spirit is stronger."

Sino-Singapore Jingwei found that in this wave of "financial anti-epidemic records", there were people who went to the unit at night, and there were also logistics support teams who snapped up 248 kilograms of fruit within three hours, and digital technology was also "showing their skills".

Arrive at the unit at 12 midnight

From 5:00 on the 28th, Pudong, where financial institutions gathered, began to implement the closure and control.

In order to ensure the normal conduct of investor transactions, some people rushed to the work unit overnight, and some people went out with work computers with them.

Xu Suping, deputy general manager of Huaxin Securities Operation Management Center, is one of them.

She recalled to Sino-Singapore Jingwei the itinerary of the night on the 27th: After receiving the notice of Shanghai closed area management and control at 8:30 p.m., she immediately contacted her colleagues by phone, coordinated with the general manager to arrange the employees to stay in the department, and then went to buy vegetables Rice and other daily necessities were delivered to the door of two aunts and uncles who were in their 80s but their children were far abroad, then quickly packed up their luggage and computer equipment, and drove from Pudong to the company in Puxi. It was almost midnight. It's 12 o'clock.

"I and the general manager of our department took turns to work according to the emergency plan. Originally, I was on-site for a week on the morning of the 28th, but as soon as I received the notice, I told the leader that I must rush to the unit before the official closure." Xu Suping said.

"Why insist on coming?" In the face of this question from Sino-Singapore Jingwei, Xu Suping used one word: mind set.

"Our leader arrived at the unit within an hour, and told me that he didn't need to come here, because she knew that I would stay for at least 10 days as soon as I came, but I felt uneasy at home, and now my family is also taken care of, I am here. There will be peace of mind, it is safe here, and there are people who feed and eat with all kinds of love, so you can rest assured when you come to work." Xu Suping said that she had practiced the emergency plan many times before, so there was basically no problem in adapting.

The employees of Wanjia Fund’s core departments are stationed in the company Source: Photo courtesy of the interviewed institution

According to the relevant staff of Shanghai Pudong Development Bank, the bank ensures the smooth flow of business and customer funds through the model of "on-site presence + remote support + multi-location collaboration".

The relevant person in charge of China Pacific Insurance mentioned that China Pacific Life Insurance Shanghai Branch has also formed a commando team for important key positions, stationed in the company headquarters to command and coordinate; every day, it will do its best to ensure the normal operation of 1-2 stores or counters, and ensure that offline Claims, preservation, and receipt of items are handled as normal.

BOC Securities introduced to Sino-Singapore Jingwei that for departments with staff in Beijing and Shanghai, the two places are AB corners with each other, and a direct connection mechanism in different places is arranged in advance, and the securities building and other branch outlets are reasonably arranged as backup offices.

In order to allow the left-behind employees to have sufficient material supply in the unit, there are still many financial people who are racing against time.

A Debon Securities interviewee told Sino-Singapore Jingwei that the company is located in the workplace on Fushan Road in Puxi. After receiving the notice, nearly 30 employees from the company's core departments stayed behind before 12 o'clock that night.

In order to do a good job in logistical support, colleagues in the General Management Department urgently contacted the restaurant on the first floor of the workplace, mobilized all resources to snap up all over the city, and provided sufficient support for front-line colleagues within three hours.

colleagues in the General Management Department used the trolleys for sending and receiving express delivery to continue to transport materials up and down, including 248 catties of fruit, 40 boxes of food, 10 folding beds, more than 50 three-piece suits, etc., and have been busy all the time. At 3:00 in the morning

. At 7:00 a.m. on the 28th, nucleic acid testing for colleagues stationed on the first floor began again." An interviewee from Debon Securities said.

Source of materials prepared by the logistics support team of Debon Securities: Photo courtesy of the interviewed institution

Source of materials prepared by the logistics support team of Debon Securities: Photo courtesy of the interviewed institution

According to Sino-Singapore Jingwei's understanding, among these "logistics support troops", some have just returned to the unit after only 30 hours from the company's unblocking, and there are also mothers whose children are just one year old. On the day, in order to go to the work unit, I also made a promise to the neighborhood committee that "the community will not go home for one day if the blockade is not lifted for one day."

A number of financial institutions have made great efforts to provide logistical support for the left-behind employees.

Lufax told Sino-Singapore Jingwei that it had prepared adequate emergency plans at the beginning of the current round of epidemics, and deployed duty lounges (movable beds, quilt heating equipment, etc.), shower rooms, fitness areas, etc. in the office. Prepare a comfortable duty environment for employees in the shortest time possible.

In terms of diet, the company arranges three meals a day with meat and vegetables, nutritious and rich for employees according to their tastes, so as to ensure that the same is not repeated every day. For example, the breakfast on Tuesday is soy milk, fried dough sticks and small soup dumplings.

The office has also prepared sufficient snacks such as milk, fruit and nuts for the left-behind office workers.

Orient Securities also uses the online employee care program to divert the emotions of isolated employees in a timely manner, and provide employees with psychological and humanistic care.

Sino-Singapore Jingwei found that the pressure of the epidemic in Shanghai has risen sharply, and scientific and technological forces have also played an important role in the online work of financial institutions.

Lufax has launched an anti-epidemic service guarantee mechanism, rapidly deploying AI outbound calls in scenarios with high frequency of customer behavior breakpoints, and providing smarter and more coherent services through human-machine collaboration, so that the problems encountered by customers are resolved immediately.

Each business line of BOC Securities Information Technology has simultaneously formulated emergency response plans for epidemic prevention and control, established a prevention and early warning mechanism, and implemented 7*24 hours of duty and monitoring of important systems.

Orient Securities, on the other hand, since March 10, the remote office support team has optimized and expanded the infrastructure many times. A total of 1,308 cloud desktop VPN users have been opened, and more than 1,071 online peaks have been opened. The information system has been fully monitored 7x24 hours, and spare parts have been prepared. All integrators and developers are required to have emergency response personnel in place in time to prepare for emergency repairs.

In addition to arranging employees to be on duty in advance, Wanjia Fund also prepared emergency laptops, VPN two-factor authentication tokens, mobile cameras and other equipment for employees to cope with the whole process of audio and video recording and unified filing required for remote investment in extreme cases. compliance requirements.

Xu Suping told Sino-Singapore Jingwei that before the implementation of the emergency plan, the Information Technology Department provided everyone with remote office settings, and the notebook was always ready, whether it was at home or at work, it would not affect work.

She also said that she is usually very busy, and her business usually ends after 9:30 pm. During the Qingming Festival holiday, she plans to teach her colleagues to play Go, "It should be fine soon after this screening, and after the epidemic has completely passed, Hope to have a good dinner with the team.”