The work of the fourth edition of the "Global Business Forum for Latin America", organized by the Dubai Chamber of Commerce, in cooperation with "Expo 2020 Dubai", was launched yesterday, with the participation of a group of heads of state, a prime minister, 13 ministers and government officials, and a gathering of dignitaries and decision-makers from deranged 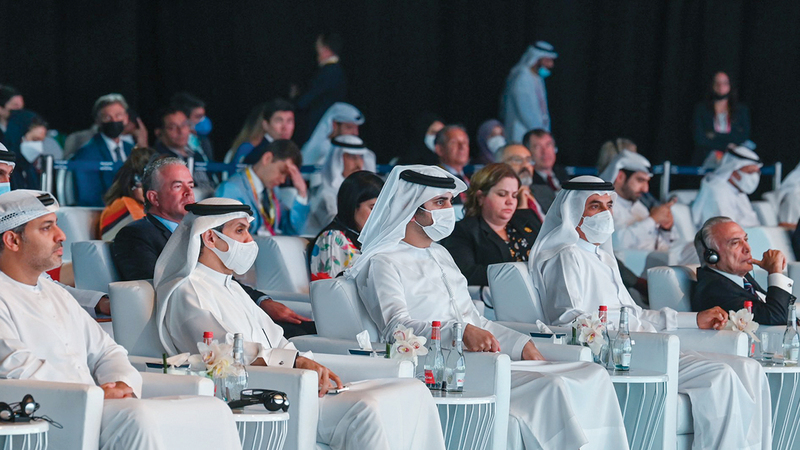 Maktoum bin Mohammed during his participation in one of the forum sessions.

The work of the fourth edition of the "Global Business Forum for Latin America", organized by the Dubai Chamber of Commerce, in cooperation with "Expo 2020 Dubai", was launched yesterday, with the participation of a group of heads of state, a prime minister, 13 ministers and government officials, and a gathering of dignitaries and decision-makers from Various countries of Latin America and the Caribbean Basin, under the patronage of His Highness Sheikh Mohammed bin Rashid Al Maktoum, Vice President and Prime Minister of the UAE and Ruler of Dubai, and in the presence of His Highness Sheikh Maktoum bin Mohammed bin Rashid Al Maktoum, Deputy Ruler of Dubai, Deputy Prime Minister and Minister of Finance.

His Highness Sheikh Maktoum bin Mohammed bin Rashid Al Maktoum, said in a tweet on Twitter yesterday: "I witnessed the launch of the World Business Forum for Latin America 2022, organized by the Dubai Chamber, with the participation of heads of state, government officials and economists, and I felt that the vision of Sheikh Mohammed bin Rashid was achieved. Rashid to build economic and commercial relations with everyone.

Dubai targets 2 trillion dirhams of its foreign trade within 5 years.

His Highness added: "Today, we have about 400 Latino companies registered with the Dubai and UAE Chambers that seek to enhance the volume of trade exchange with Latin American countries, which amounts to 9 billion dirhams.

We will continue to explore the economic potential of Africa, Latin America, and the ASEAN region.

Our ambition is without borders, and our foreign trade is the backbone of the future economy.”

The fourth session of the forum will be held over two days, under the slogan “a solid economy for a promising tomorrow.” This session revolves around three main pillars: “enhancement, empowerment, and development.”

His Highness Sheikh Maktoum bin Mohammed bin Rashid Al Maktoum witnessed a session entitled "Lessons in Diversity and Partnership", during which the President of the Co-operative Republic of Guyana, Dr. Muhammad Irfan Ali, and Minister of State for Foreign Trade, Dr. Thani bin Ahmed Al Zeyoudi, spoke about the most prominent efforts made by the State of Qatar. The UAE and the Cooperative Republic of Guyana, with regard to promoting economic diversification, and developing future plans that led to an increase in the proportion of investments and growth.

The session also reviewed the lessons learned from dependence on oil resources, the role of economic partnerships, and strengthening international cooperation in supporting economic diversification.

In his speech, Muhammad Irfan Ali touched on the common denominators of the development experience in both the United Arab Emirates and the Co-operative Republic of Guyana, including the population and natural resources. And benefit from oil and energy revenues, by investing in the development of modern infrastructure that supports various economic sectors.

He focused on transparency and governance as a major driver of success in attracting foreign investments, and the UAE in particular, stressing his country's quest to build an economy based on inclusiveness and diversity, and which constitutes a model for various Caribbean countries, being based on openness, diversity, transparency and tolerance, similar to the model adopted by a country UAE.

In turn, Dr. Thani bin Ahmed Al Zeyoudi stressed that the UAE is moving forward in strengthening its partnerships with various countries of the world, including Latin American countries, based on its efforts to diversify its economy, and in line with the vision of His Highness Sheikh Mohammed bin Rashid Al Maktoum, Deputy The President, Prime Minister and Ruler of Dubai, and His Highness’s directives to consolidate the UAE’s position as a global center for trade.”

He stressed the state's tendency to have trade agreements with 90% of the world's countries.

In his speech during the forum, Abdulaziz Al Ghurair said: “Holding this forum within the activities of (Expo 2020 Dubai), represents an ideal opportunity to shed light on the emirate’s economic and investment position, and its role in building bridges of cooperation and trade between various countries around the world, especially since it is being held this year. At an exceptional time, as the economies of countries around the world are looking to search for new global partnerships and opportunities for economic growth, in the post-Coronavirus era.

He continued, "27 countries from Latin America and the Caribbean have untapped potential, and it is necessary to pay attention and push for economic integration and digital acceleration, and to create new horizons for growth, and this is what Dubai, which has one of the fastest growing economies in the world, aspires to. To achieve its goals of enhancing Dubai’s foreign trade, and raising it to reach two trillion dirhams, equivalent to 544 billion US dollars, within the next five years.”

He added: “Since the launch of the international expansion strategy in the region, in 2017, the number of Latin American companies registered with the Chamber has grown significantly, as the number of Latin companies today reaches 400 companies, and we look forward to increasing this number in the future, in light of all these interactions that we see between business communities. In (Expo).