Game anti-addiction, need to "catch the grandfather who certified his grandson"? 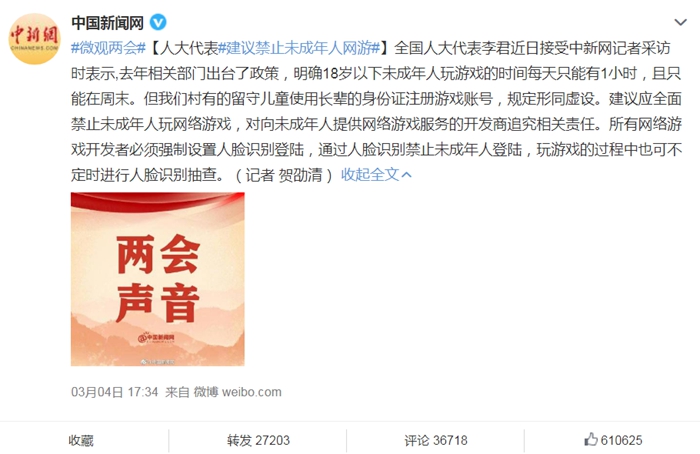 Recently, Li Jun, a representative of the National People's Congress, said, "Some left-behind children in our village use their elders' ID cards to register game accounts, and the regulations are useless. It is suggested that minors should be completely prohibited from playing online games, and the development of online game services for minors should be prohibited. businessmen will be held accountable.”

"It is recommended to ban online games for minors" aroused heated discussions.

Li Jun also suggested that all online game developers must be forced to set up face recognition login, and minors are prohibited from logging in through face recognition, and face recognition spot checks can also be carried out from time to time in the process of playing games.

Ding Yuanzhu, a member of the National Committee of the Chinese People's Political Consultative Conference and a professor at the Central Party School, also talked about this problem. At present, there are still minors in the society using adult identity information, which makes the anti-addiction system unable to function.

Ding Yuanzhu suggested preventing underage players from bypassing the real-name authentication system; prohibiting the operation of game rental platforms on e-commerce platforms, cracking down on platforms that provide game rental services through private domain traffic, and eliminating black and gray gangs that provide face-substituting services , and those with serious circumstances shall be investigated for criminal responsibility.

"When many celebrities endorse game advertisements, not to mention minors, it is difficult for adults to resist the temptation."

Ding Yuanzhu also mentioned that parents are the first responsible for the education of minors.

It is recommended that

, and relevant civil liabilities shall be pursued.

Netizens quarreled, who are you standing for?

In response to some of the above suggestions for preventing addiction to games, some netizens said, "Although I am an adult, I am very speechless about this. Do I need to be certified to play a greedy snake?"

"You have 'Little Bully' in your childhood, but we can't have online games in our childhood?" "Learn from abroad, and the game will be graded."

Some netizens ridiculed, "I can't help but have an excuse for poor game performance. If you ban the game, you will find out that your child is really not this material."

Some netizens said, "It's difficult to control. Some grandparents are old and love their children, so they will help face recognition." "It is the key to catch the grandfather who authenticates the grandson."

"It is the right way to completely ban online game advertisements, just like banning medical advertisements and tobacco advertisements." "It's time for adults to ban them, as it will affect family life."

"Playing for pleasure, indulging in indulging hurts the body." Some people believe that it is the key to formulate measures to prevent teenagers from becoming addicted to games.

On September 25, 2019, the World Health Organization officially identified game addiction, which is addicted to online games or video games and hinders daily life, as a new mental disorder. As a type of dependence disorder, it was included in the latest edition of the International Classification of Diseases. .

As of press time, "Do you support the prohibition of minors from playing online games?" The survey results.

For the anti-addiction of minors' games, at present, some regulatory measures such as face recognition are not satisfactory, and there is still a possibility of "bypassing".

On the one hand, there are "black products" such as rental accounts and real-name authentication on behalf of others. On the other hand, some game companies have "real interests and fake prevention."

There are also issues such as family education and security leakage of identity information behind this.

It can be said that the problem of anti-addiction in games for minors is full of problems. Only one party's efforts are nothing but a drop in the bucket. Only the game classification, supervision technology update, the conscience of game companies, parents' attention, and school's attention, children's future can only be achieved. rest assured.