What are the prices like in January? The increase in 20 provinces was lower than that of the whole country, and Yunnan was the same as last month 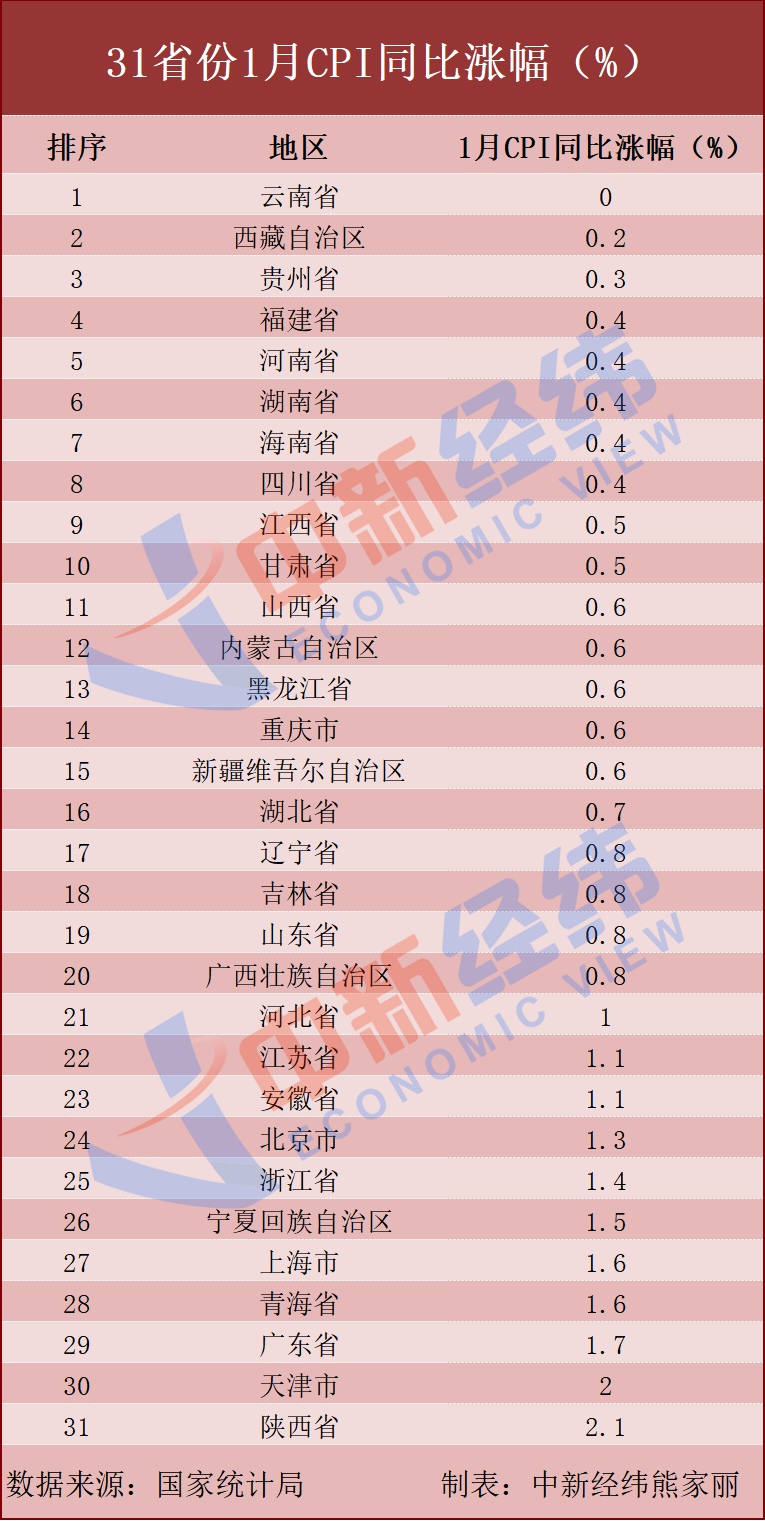 Sino-Singapore Jingwei, February 20 (Xiong Jiali) How did the price rise across the country in January?

Recently, the National Bureau of Statistics announced the consumer price index (CPI) of 31 provinces in January 2022.

China-Singapore Jingwei combing found that the year-on-year CPI growth rate in 20 provinces in January was lower than that of the whole country, while prices in Yunnan were the same as the previous month (December 2021).

Data show that in January 2022, the national consumer price rose by 0.9% year-on-year, a drop of 0.6 percentage points from the previous month.

Dong Lijuan, a senior statistician at the City Department of the National Bureau of Statistics, pointed out that in January, various regions and departments continued to supply the market for important livelihood commodities before the Spring Festival, and consumer prices were generally stable.

The year-on-year CPI increases in the remaining 20 provinces were all lower than the national level, among which the increase in Yunnan was 0, and prices were the same as last month.

Xu Ke, a researcher at Zhixin Investment Research Institute, believes that the decline in pork prices has dragged down the CPI. The number of live pigs in the fourth quarter of 2021 increased by 10.5% year-on-year, and the high inventory drove the wholesale price of pork to fall in January.

How will prices go in the future?

Experts hold different views on how the CPI will go in the future.

Wen Bin, a researcher at China Minsheng Bank, said that in the next stage, food prices will still be the main factor affecting the trend of CPI. Grain has been harvested year after year, and pork prices will not be easy to recover in the short term. It is expected that the overall domestic inflation level will be controllable.

Zhang Aoping, president of the Incremental Research Institute, predicts that in 2022, the CPI will continue to be dragged down by pig prices in the short term, and will gradually recover in the long run.

It is expected that the supply of live pigs will peak in this round of pig cycle in the third quarter, which will also correspond to the gradual recovery of pig prices after bottoming out.

In the long run, with the development of cross-cyclical and counter-cyclical macro-control policies and the transmission of the effect of upstream raw material price increases, the CPI data will gradually recover, but the recovery momentum will be relatively moderate.

Pork on the supermarket shelf.

Xu Ke, a researcher at the Zhixin Investment Research Institute, said that after the Spring Festival, the demand for pork has become weaker, and the pigs have been released into the market one after another.

The price of fresh vegetables has also dropped rapidly, and it is expected that the CPI food price in February will remain negative year-on-year.

The rise in international oil prices has supported non-food consumption. In addition to the strong consumption of service industries such as catering, entertainment, and tourism during the holidays, the month-on-month increase in non-food CPI may expand.

Zhang Jingjing, chief macro analyst at Western Securities, believes that the upward risk of CPI in the second half of the year cannot be ignored.

Zhang Jingjing pointed out that no matter what the situation is, the risk of domestic CPI breaking 3% year-on-year in the third quarter is not low.