The decline in pork prices expanded, and the year-on-year increase in CPI fell significantly in January

Zhongxin Finance, February 16 (Reporter Xie Yiguan) Driven by the expansion of pork prices, the year-on-year increase in the national consumer price (CPI) fell significantly in January. Experts predict that the CPI may maintain a moderate upward trend in 2022. CPI rise and fall chart. from the National Bureau of Statistics Year-on-year CPI growth eased in January   According to Dong Lijuan, s 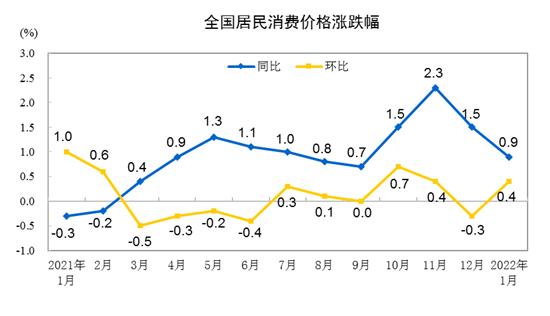 Experts predict that the CPI may maintain a moderate upward trend in 2022.

In food, due to the high base in the same period last year, the price of pork fell by 41.6%, and the decline expanded by 4.9 percentage points, affecting the CPI to drop by about 0.96 percentage points; the price of fresh vegetables changed from an increase of 10.6% in the previous month to a decrease of 4.1%; fresh fruits and aquatic products. Prices rose by 9.9% and 8.8%, respectively, extending the gains.

Among the non-food items, the prices of industrial consumer goods rose by 2.5%, a decrease of 0.4 percentage points, of which the prices of gasoline and diesel rose by 20.7% and 22.7% respectively, and the increase was both lower than that of the previous month.

The pork section in a large supermarket in Fengtai District, Beijing.

From a month-on-month perspective, the CPI increased by 0.4% from a decrease of 0.3% in the previous month.

Among them, food prices changed from a decrease of 0.6% in the previous month to an increase of 1.4%, affecting the CPI increase of about 0.26 percentage points.

"In terms of food, affected by the festival, the prices of fresh fruit, aquatic products and fresh vegetables rose by 7.2%, 4.1% and 3.1% respectively; the winter seasoning was basically over, coupled with the accelerated release of live pigs before the festival, the supply of pork was sufficient, and the price fell by 2.5%. " Dong Lijuan pointed out.

It is worth noting that, affected by the rise in international energy prices, the prices of gasoline, diesel and liquefied petroleum gas rose by 2.2%, 2.4% and 1.5% month-on-month respectively in January.

Data map: Citizens are shopping for vegetables in a large supermarket in Shijiazhuang City, Hebei Province.

CPI is expected to continue its moderate upward trend in 2022

According to the monitoring of the Ministry of Agriculture and Rural Affairs, on February 7, the “200 Index of Agricultural Products Wholesale Prices” was 137.08, down 1.59 points from the pre-holiday period (January 30).

"Looking forward to the price situation in 2022, it is expected that the CPI will rise slightly, and the annual increase may be higher than that in 2021, but the overall increase will be less than 3%, and there will be no inflationary pressure." Liu Xuezhi, a senior researcher at the Bank of Communications Financial Research Center, said.

Liu Zhicheng, a researcher at the Market and Price Research Institute of the China Academy of Macroeconomics, pointed out that in 2022, the impact of the exogenous epidemic may gradually weaken, and the price movement is expected to depend more on endogenous factors in the economy.

From a domestic perspective, my country's economy continues to recover and develop, the supply of industrial and agricultural products and services is abundant, the supply of important livelihood commodities such as grain, oil, meat, eggs, milk, fruits and vegetables is sufficient, and basic energy sources such as coal, oil and gas are guaranteed, and the ability to effectively respond to abnormal market price fluctuations has been significantly enhanced.

"Comprehensive research and judgment, my country's prices will maintain a solid foundation in 2022. It is expected that the CPI will continue to rise moderately, the PPI increase may gradually fall, and the upstream and downstream price trends will become more coordinated." Liu Zhicheng said.