"Wind of the Winter Olympics" heats up the ice and snow season, "Generation Z" stirs up the "white economy" 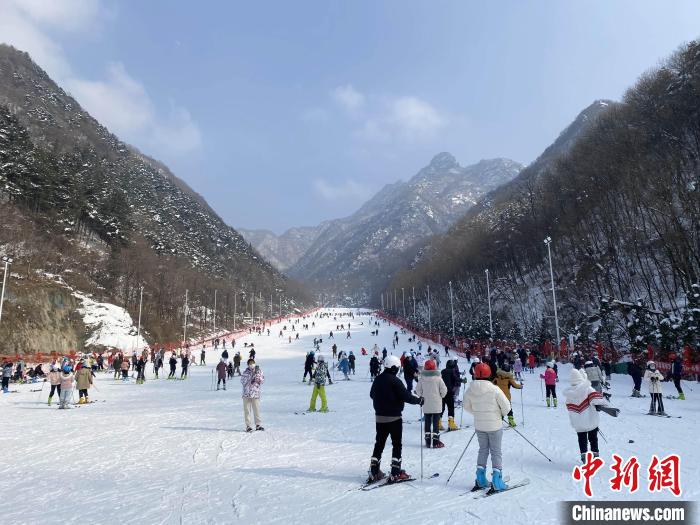 China News Service, Xi'an, February 10th: "Wind of the Winter Olympics" urges "Gen Z" to stir up the "white economy" during the ice and snow season

"Although I lack sports skills, I am full of yearning for skiing on the snow. The holding of the Beijing Winter Olympics gave me a 'reason' to move." Wang Li, a "post-95" in Xi'an, admitted frankly.

The Beijing Winter Olympics are in full swing. The outstanding performances of Chinese athletes such as Gu Ailing, Wu Dajing and Su Yiming have made ice and snow sports the focus of public attention.

At the Cuihua Mountain Ski Resort in Xi'an, which is more than 1,000 kilometers away from the Winter Olympics, Wang Li also started his first "snow journey".

With social and economic development, from niche sports to popular fashion lifestyles, from cold resources to hot economy, the development of China's ice and snow sports industry has gradually "slid into the fast lane".

In this ice and snow season, the holding of the Beijing Winter Olympics has made ice and snow sports break the circle from the labels of "niche" and "extreme", and is sought after by the "Generation Z" group who pursue fashion and lead the trend.

At the Cuihua Mountain Ski Resort located at the northern foot of the Qinling Mountains, the reporter saw that the snow-covered slopes reflected the colorful figures of skiers, either galloping or staggering, creating a dynamic picture in the snow and ice.

"The students we face now are basically young people. They have the willingness and enthusiasm to participate in skiing, and they are more willing to 'invest' in the hobby." Xi Ruohan, 26, from Harbin, has been engaged in ski teaching for four years. In time, he told a reporter from Chinanews.com that ski resorts generally have services for renting ski equipment, but more and more young people have begun to bring their own helmets, snowshoes, snowboards and other ski equipment.

The picture shows the Cuihua Mountain Ski Resort, skiing has become a "hot choice" for many people during the Spring Festival.

If ice and snow sports are compared to a pyramid, the competition in the Winter Olympics is the "dance" on the top of the tower, while the consolidation of the tower's base requires the combined efforts of policies and plans such as "300 million people on ice and snow" and the development of a "white economy".

"The holding of the Beijing Winter Olympics has strengthened the willingness of the public to experience ice and snow sports. I hope that by imparting skiing skills and experience, more skiers can benefit, so that they can understand this sport and fall in love with it." Xi Ruohan said.

From ice and snow tourism to accommodation services, from ski training to equipment consumption, the industrial landscape and potential of the "white economy" are constantly expanding and releasing.

According to industry analysts, with the upgrade of tourism consumption, tourists pay more attention to interactive and experiential products, and ice and snow tourism just fits with it.

At the same time, the holding of the Beijing Winter Olympics has also led to further warming of ice and snow tourism.

Around the "Winter Olympics economy", a closed-loop industrial chain of "ice and snow manufacturing, rescue, vacation services, and supporting facilities" has gradually formed.

In the 2021-2022 ice and snow season, China's ice and snow leisure tourism revenue is expected to exceed 320 billion yuan.

"With the approach of the Winter Olympics, skiing has become a 'hot choice' for many people to travel during the Spring Festival. According to the requirements of epidemic prevention and control, the Cuihua Mountain Ski Resort receives about 1,500 people every day, and the tourists who come are mainly young people. People are the main focus." He Jia, a staff member of the Cuihua Mountain Scenic Area in Xi'an, said that this year the ski resort will divide the ski trails into a beginner's area and a ski area, so that beginners and "senior players" can "ski" their own trails, thereby improving the skiing experience of tourists. .

"Seeing Gu Ailing winning the Winter Olympics gold medal, I met my friends at the ski resort for the first time. For me, skiing is not only physical exercise, but also has a social function." Yao Xiang, who studied at East China University of Science and Technology, said with a smile, " It’s a lot more fun to meet friends with snow, and eat hot pot together after skiing.” (End)