Who directed the farce of "Pacific scallops pouring into Zhangzi Island"?

Sino-Singapore Jingwei, January 18 (Yan Shuxin and Zhao Jiaran) On January 18, Zhangzidao's stock price rose by the limit, which attracted market attention. Previously, there were rumors that "the eruption of the Tonga volcano has caused a large number of Pacific scallops to flood into Zhangzi Island, and this year's revenue may increase by 100%+".   It is reported that Zhangzidao has staged th 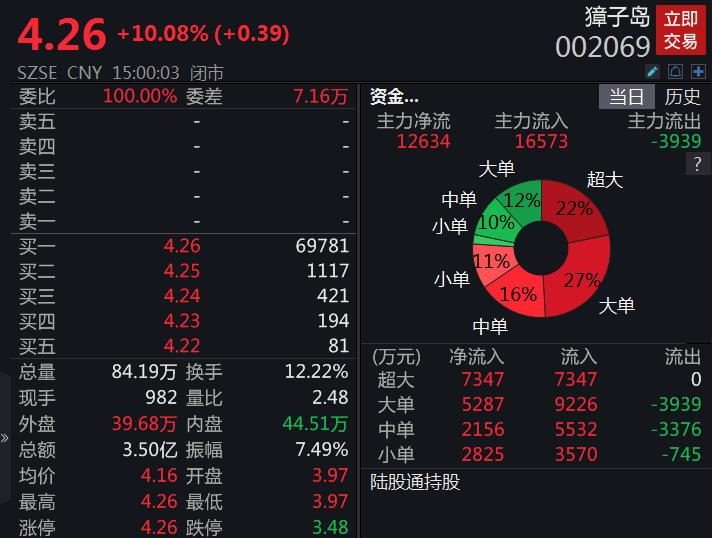 Previously, there were rumors that "the eruption of the Tonga volcano has caused a large number of Pacific scallops to flood into Zhangzi Island, and this year's revenue may increase by 100%+".

It is reported that Zhangzidao has staged the "scallop escape" game many times. After the above news came out, some netizens commented, "Could it be that the scallop that escaped before came back?"

However, a number of experts told Sino-Singapore Jingwei that there is no scientific basis for "the eruption of the Tonga volcano caused a large number of Pacific scallops to pour into Zhangzi Island".

On the afternoon of the 18th, Zhangzidao also stated on the investor interactive platform that the above rumors were seriously untrue.

So, who directed this farce?

At about 17:00 on January 17th, a media Douyin official account released a short video with the caption, "Due to the eruption of the Tonga volcano and the tsunami, a large number of Pacific scallops flooded into Zhangzi Island, and the revenue is expected to increase by more than 100% this year. "

After the market opened on the 18th, Zhangzidao's stock price rose sharply, and then the daily limit was quoted at 4.26 yuan per share.

According to Wind data, as of the close, the main inflow of Zhangzidao was 166 million yuan, and the main outflow was 39.39 million yuan.

In response to the above rumors, Sino-Singapore Jingwei called Zhangzidao Board Secretary Office several times on the 18th, and sent an interview letter to it, but received no reply as of press time.

On the morning of the 18th, Zhangzidao Securities Department responded to the media that "the above situation is not yet clear", and "if there is a major situation, the company will disclose it as soon as possible."

On the Shenzhen Stock Exchange's interactive platform, some investors also asked Zhangzidao's secretary, "The volcanic eruption in the sea area of ​​Tonga has caused the seawater temperature in the nearby waters to rise. Will it lead to the possibility of a large number of Pacific scallops flooding into the company's waters to avoid risks? "

"I personally think that it is almost impossible for scallops that survive in the Pacific Ocean to flood into Zhangzi Island." Mu Yongtong, a professor at Ocean University of China, told Sino-Singapore Jingwei, "Scallops have a small living range and generally do not move widely. , so the possibility of coming to Zhangzidao from the Pacific Ocean is very small."

In addition, an unnamed university oceanography professor also told Sino-Singapore Jingwei that this rumor "has no scientific basis."

In an interview with Sino-Singapore Jingwei, Ren Hui, an author of natural science popularization, said that there is little scientific connection between the increase of scallops on Zhangzidao and the eruption of the Tonga volcano.

"Tonga's volcanic eruption triggered a tsunami. However, due to the island's blockade, the swells that reached our waters were just like that, and Zhangzi Island should not feel it."

According to the latest monitoring results by the Tsunami Warning Center of the Ministry of Natural Resources of China, the Tonga volcanic eruption triggered a transoceanic tsunami that affected the entire Pacific coast.

Tsunami waves were detected in the coastal waters of China in the early morning of the 16th. Among them, the largest tsunami wave at Shipu Station in Zhejiang was about 20 cm, and the tsunami waves at other tidal stations were all less than 15 cm.

So far, this process has not caused disastrous effects on China's coast.

"It has been previously said that volcanic eruptions will lead to the formation of sulfur-containing compounds, resulting in a drop in global temperature; however, from the current point of view, the total amount of sulfur-containing compounds emitted by the Tonga volcano is relatively small, even if it has an impact on the climate of the northern hemisphere, it will also There is a certain lag, and it does not have an immediate impact."

Ren Hui said that it is only a few days before the eruption of the Tonga volcano, and there is no scientific basis for judging whether the scallops on Zhangzidao have increased significantly. This kind of statement is more of a joke on the Internet.

Xu Feng, director of Shanghai Jiucheng Law Firm, told Sino-Singapore Jingwei that in this incident, the relevant subjects were suspected of spreading false securities information, and the regulators should pay attention in time.

"Judging from the initial response from the securities department of Zhangzidao, the information about 'Tonga volcano eruption caused a large number of Pacific scallops to flow into Zhangzidao' has been suspected of fabricating, spreading false information or misleading information and disrupting the securities market. Zhangzidao should verify and confirm as soon as possible. Response. If it is true, make an official announcement; if it is determined not to be true, make a formal clarification in a timely manner. If the relevant subject is indeed fabricated and not malicious, remedial measures such as deletion and clarification should be taken as soon as possible. The current stock price reaction cannot be ruled out related to rumors, and it is recommended that the regulatory authorities pay attention to it ." Xu Feng said.

It is worth mentioning that when the market closed on the afternoon of the 18th, Zhangzidao said in response to investors' questions that the

company was concerned about recent media reports that "Tonga volcanic eruption and tsunami have caused Pacific scallops to flow into Zhangzidao, and this year's revenue may increase by 100%. +" and related rumors, the above reports and rumors are seriously untrue, the company's management has not accepted any relevant interviews and replies to the above questions, and the company reserves the right to protect its own rights and interests through legal channels.

Pan Helin, executive dean of the Digital Economy Research Institute of Zhongnan University of Economics and Law, said in an interview with Sino-Singapore Jingwei that the saying that "scallops poured into Zhangzidao" is more like a joke.

"Because scallops are in the deep sea, as for whether they have 'swam back', you have to send frogmen into the water to find out. This is a joke that someone came up with. As a result, some people took the joke as a fact, and some took it for marketing. Don't take it seriously, it's true For scientific proof, hiring a diver is more reliable than anything else."

As of press time, the aforementioned Douyin video has been deleted.

The "scallop escape" scene has been staged many times

After the news that "the eruption of the Tonga volcano caused a large number of Pacific scallops to flood into Zhangzi Island", some netizens commented, "Could it be that the scallops that escaped before came back?"

Previously, Zhangzidao had staged the "scallop escape" scene many times.

On the evening of October 30, 2014, Zhangzidao issued an announcement saying that due to the unusual cold water mass in the North Yellow Sea that has been encountered in decades, the company sowed more than 1 million mu of shrimp in 2011 and some 2012 and was about to enter the harvest period. No scallops.

Affected by this, the company's performance in the first three quarters of 2014 will change from the expected profit to a loss of more than 800 million yuan.

Zhangzidao's "Where are the scallops going" became the largest "black swan" in the A-share market in 2014.

In December of that year, the Dalian Securities Regulatory Bureau also conducted a special inspection on Zhangzidao for this matter, and found that the company had irregular decision-making procedures for some matters, irregular implementation of the internal control system, flawed decision-making in sea area acquisitions, and lack of sufficient demonstration of deep-sea sowing. and other issues, and presented them with a "decision ordering correction" and a "warning letter".

Originally thought it was over like this, but who knew that in January 2016, Zhangzidao was reported by more than 2,000 real names, claiming that the "cold water mass caused the failure of harvesting scallops during the harvest period" in 2014 was due to early harvesting and false seedlings. , not a natural disaster.

Zhangzidao was therefore questioned by the Shenzhen Stock Exchange.

In 2018, a similar incident happened again.

According to media reports, since 2014, in less than six years, Zhangzidao's scallops have "disappeared" four times.

On February 9, 2018, the China Securities Regulatory Commission decided to file an investigation on Zhangzidao due to suspected information disclosure violations.

On June 24, 2020, the China Securities Regulatory Commission made an administrative penalty and market ban decision on Zhangzidao’s information disclosure violations in accordance with the law, issued a warning to Zhangzidao Company, and imposed a fine of 600,000 yuan, and imposed a fine of 30,000 yuan on 15 responsible persons. The fines ranged from 300,000 yuan to 300,000 yuan, and the four main responsible persons were banned from the market for 5 years to life.

The survey results show that Zhangzidao has made losses for two consecutive years in 2014 and 2015. It objectively took advantage of the characteristics of the seabed inventory and fishing situation that are difficult to find, investigate, and verify, and did not take the actual fishing sea area as the basis. Cost carry-over resulted in serious distortion of financial reports. In 2016, profits were disclosed from losses to profits by reducing the recording costs and non-operating expenses. In 2017, the sea areas that had been harvested in previous years were listed as write-off areas or impairment areas, which was exaggerated. In addition, the company also involved a number of illegal facts such as untruthful disclosures in the Year-end Inventory Report and Write-off Announcement, untruthful autumn test disclosures, and failure to disclose performance changes in a timely manner.

In September 2020, the China Securities Regulatory Commission decided to transfer Zhangzidao and related personnel suspected of securities crimes to the public security organs for criminal responsibility, and the "scallop escape" incident came to an end.