The new regulations for the blind box were introduced, and Bubble Mart responded quickly. Netizens: What about KFC? 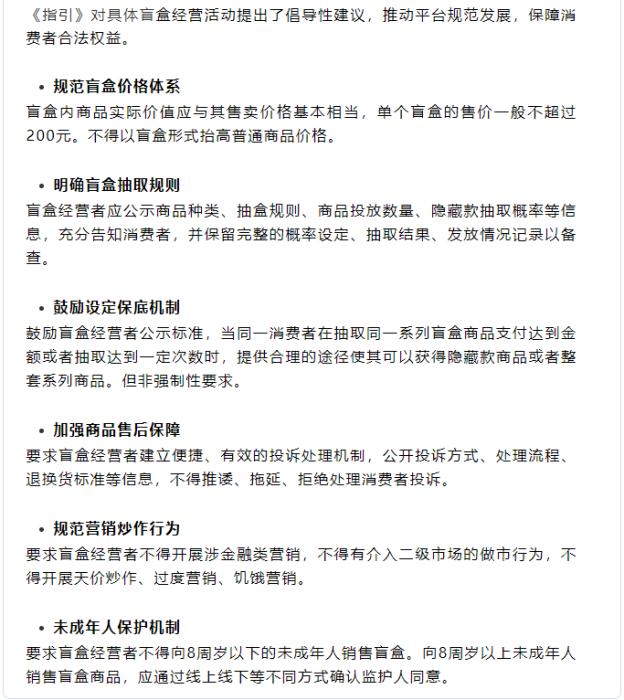 Following the "China Consumers Association Review KFC Blind Box" and "China Consumers Association Named KFC Bubble Mart" on the hot search, on the 14th, the Shanghai Municipal Bureau of Market Supervision issued the "Shanghai Blind Box Business Activities Compliance Guidelines", proposing "Blind boxes shall not be sold to minors under the age of 8", and then posted on the hot search.

Subsequently, the relevant person in charge of Bubble Mart said to Zhongxin Finance: A healthy and orderly fashionable play market is not only conducive to protecting the rights and interests of consumers, but also creates a good development space for Bubble Mart.

In the next step, Bubble Mart will actively cooperate with the regulatory authorities, and gradually explore specific plans that can be implemented in accordance with the spirit of the "Guidelines".

In the "Guidelines" issued by the Shanghai Municipal Bureau of Market Supervision, the red line of blind box operation is drawn.

The "Guidelines" propose that commodities that have strict requirements on sales qualifications, storage and transportation, and conditions of use shall not be sold in blind boxes, such as special foods, medicines, medical devices, toxic and harmful substances, flammable and explosive substances, living bodies animals etc.

Screenshot from the WeChat public account of "Shanghai Market Supervision".

At the same time, the "Guidelines" suggest that the blind box price system should be standardized.

It is proposed that the actual value of the goods in the blind box should be basically the same as its selling price, and

It is also recommended to clarify the rules for the extraction of blind boxes, encourage the establishment of a guarantee mechanism, strengthen the after-sales guarantee of commodities, standardize marketing and hype behavior, and set up a protection mechanism for minors.

"The "Guidelines" basically take into account the current focus of the blind box economy. Through standardized and sustainable rule setting, it is not only conducive to combating chaos in blind box business activities, but also to the long-term development of the blind box industry." Zhongnan Pan Helin, executive dean of the Institute of Digital Economy of the University of Economics and Law, told China-News.com reporter, "At least in terms of controlling the excessive marketing of blind boxes, it will be more targeted in the future."

In Pan Helin's view, it is necessary to promote the standardization of the blind box economy nationwide, to prevent excessive marketing of blind boxes through the lottery model, and to prevent blind box speculation.

How hot is the blind box?

Some consumers once told a reporter from Zhongxin Finance and Economics that entering any retail store in the mall now, 9 out of 10 can find blind box products.

However, with the popularity of blind boxes, various blind box market chaos has emerged one after another, and has been criticized.

For example, the "DIMOO Co-branded Blind Box Package" jointly launched by KFC and Bubble Mart, a blind box seller, has attracted widespread attention from the society.

It is understood that in order to collect blind boxes, some consumers did not hesitate to spend 10,494 yuan to buy 106 sets of meals at one time; there are also consumers who buy "eat-for-you" services for "seeking babies", and hire people to buy and eat packages on their behalf to obtain blind boxes. .

This behavior of excessive food consumption in order to collect all the blind boxes was named by the China Consumers Association.

On the 12th, the China Consumers Association issued a document saying that using "blind boxes" to induce excessive food consumption should be boycotted!

As of press time, KFC officials have not publicly responded to this.

In addition to over-inducing consumption, "living blind boxes", "fun blind boxes", "express blind boxes", and "Putian sneaker blind boxes" have also been repeatedly reported, which not only caused controversy in morality, but even suspected violations of the law.

At the same time, because the product quality is difficult to guarantee, fake and inferior products and "three-nothing" products in blind boxes also appear from time to time.

After consumers open the blind box, some products may not meet the safety indicators of relevant national standards; some may be counterfeit products or secondary sales; "Products; some have quality defects such as scratches, peeling paint, stains, etc.

The Consumer Protection Committee of Shanghai Pudong New Area commissioned a professional testing agency to test 10 groups of blind box products of different brands in December 2019. It was found that 8 samples had hidden dangers of "small parts", which may cause children to block the respiratory tract and isolate the air. Choking hazard due to circulation.

In addition, many consumers are obsessed with enjoying the uncertainty and surprise brought by opening the blind box, and there will also be irrational consumption behaviors.

Due to the high repetition rate of blind box purchases and few hidden funds, the secondary trading market has been spawned, and many buyers have sold blind boxes in their hands at high prices on second-hand platforms.

"The artificial scarcity and lottery model have brought fire to the blind box, but this model also has various hidden concerns." Pan Helin pointed out that, for example, the dominance of the scarcity model lies in the merchants, which makes the value of the hidden funds insecure, and the merchants can increase the value at will. Yield.

The combination of lottery and merchandise can lead to over-consumption, which in turn leads to waste.

“The addiction of customers, especially teenagers, will make it a financialized commodity and suffer more hype. There is also the issue of the reliability of the sales channel, which will open the package without permission and then sell the hidden money at a high price to make a profit. ." Pan Helin added.

Blind boxes are no longer fragrant?

Bubble Mart starts to tear the

Although in the eyes of everyone, Bubble Mart made a fortune as a blind box, but on the cusp of the storm, Bubble Mart was actually eager to tear off the "blind box" label on his body.

Previously, Wang Ning, founder of Bubble Mart, has repeatedly emphasized in public that Bubble Mart is not a blind box company, but an IP-based trendy game company.

Several obvious manifestations are that, according to media reports, the first offline park built by Bubble Mart and Chaoyang Park will be settled in Beijing, and it has also begun to try to deploy a number of new businesses, such as the collection of big dolls developed based on the core IP Molly.

According to Bubble Mart, it will continue to expand the collection line products based on its other IPs such as DIMOO and Labubu in the future.

Wang Ning also said in an interview that starting from 2021, Bubble Mart will no longer list the benefits of the blind box separately in the financial report.

It can be seen from the prospectus submitted by Bubble Mart that blind box products are the main force of Bubble Mart’s revenue.

In the first half of 2020, blind box products also accounted for 84.2% of Bubble Mart's total revenue with a revenue of 689 million yuan.

Although the sales of blind boxes have performed well, from 2020, the growth rate of Bubble Mart's revenue has dropped sharply.

Reflected in the stock price, the market value of Bubble Mart once reached HK$150 billion after its listing, and now there is only HK$64.1 billion left.

Bubble Mart, which was hit by the "KFC Blind Box Incident", also suffered a two-day losing streak, closing down to HK$45.7 on January 14.