On January 11, the award ceremony of "China Dream Cup • China Economic News Figures-2021 Top Ten Economic Figures of the Year" was held in Beijing. Li Dongsheng, the founder and chairman of TCL, won the title of "Top Ten Economic Persons of the Year" in 2021 for leading TCL to go through cycles, making breakthroughs, and building the company into "a sample of the era that belongs to China's manu 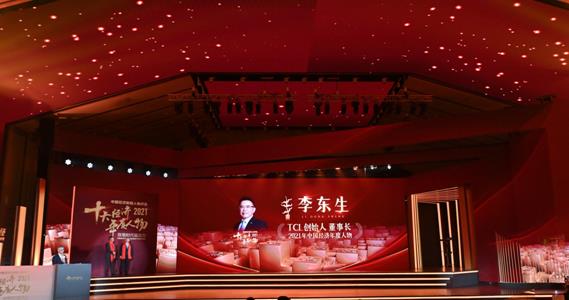 Li Dongsheng, the founder and chairman of TCL, won the title of "Top Ten Economic Persons of the Year" in 2021 for leading TCL to go through cycles, making breakthroughs, and building the company into "a sample of the era that belongs to China's manufacturing industry".

Transforming genes through the cycle

The selection of "2021 Top Ten Economic Persons of the Year" is sponsored by China Economic Media Association, and jointly organized by Sina Finance, China Business News, and Wu Xiaobo Channel.

The award speech given to Li Dongsheng by the organizer and jury of the "Top Ten Economic Persons of the Year" this time is: "He is a pathfinder of China's intelligent manufacturing globalization, and a doer of industrial transformation and upgrading. He has been in business for 40 years and has led TCL through the During the period, it has grown from a small local factory to an intelligent high-tech industry group with global influence, covering three core industries of intelligent terminal, semiconductor display, semiconductor photovoltaic and semiconductor materials. He adheres to technology-oriented, builds a global R&D system, and is at the forefront Continuous strategic investment in the field of science and technology to establish a benchmark for independent innovation of enterprises."

In this regard, Li Dongsheng said: "This award is not only an encouragement to me personally, but also an affirmation of TCL's 40-year development history."

TCL has developed for 40 years and has gone through the whole process of reform and opening up. It is one of the few companies in China that has remained revitalized after 40 years of baptism. In 2021, the overall revenue of TCL (Group) has exceeded 250 billion.

Li Dongsheng summed it up in four words: "change and transformation", "In the past 40 years, national development, social concepts and economic environment have changed very quickly. Enterprises must keep up with the pace of changes in the external environment. TCL can sense environmental changes early and take the initiative to do so. Change. The development history of TCL is a history of change and innovation, and change has become the DNA of TCL.”

For TCL, the most critical step in transforming from a consumer electronics manufacturer to a high-tech enterprise is to establish TCL Huaxing and enter the semiconductor display industry.

In 2009, TCL launched Huaxing Optoelectronics and expanded its business capabilities to the semiconductor display industry. So far, it has deployed 9 panel production lines and 5 module factories, with an investment of over 260 billion yuan.

The success of TCL Huaxing has enabled TCL to master the core components and establish a vertically integrated industrial chain; at the same time, the introduction of Industry 4.0 and intelligent manufacturing has greatly improved its industrial capabilities; Industrial ecology, and improve the integrated layout of production, education and research.

At present, TCL has 42 R&D centers and 32 manufacturing bases around the world, and its business covers more than 160 countries and regions.