How is the "hot eyes and golden eyes" made of high-speed rail? 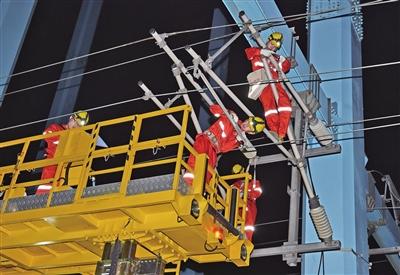 How is the "hot eyes and golden eyes" made of high-speed rail?

The "Starry Sky" intelligent analysis system using AI technology was applied across the Beijing-Shanghai high-speed rail line, and the completion of a routine inspection was shortened from the original 3 years to 4 days

The maintenance staff of the Beijing-Shanghai high-speed railway used the operating vehicle to overhaul the catenary equipment.

The catenary is a non-backup power supply system erected along the railway track to transmit electrical energy to high-speed rail trains.

From 2011 to 2021, the number of passengers sent by the Beijing-Shanghai high-speed rail exceeded 1.1 billion.

From 0:00 to 4:30 in the morning, it is called the "skylight time" for high-speed rail maintenance. During this time period, the integrated maintenance personnel of high-speed rail often have to carry a few hundred kilograms of ground wire and support the high-speed rail tracks. The long ladder car climbed up to the catenary pillar, and checked the potential hazards screw by screw. Every time a hidden hazard was dealt with, the life safety of passengers would be more protected.

In the past, it took 3 years to complete a manual full-line inspection; later, the 4C catenary inspection vehicle was put into operation, taking pictures instead of manual inspections, so that the inspection time was shortened to once a quarter, but it still needs to rely on purely manual methods to complete Analysis and judgment of each photo.

Until 2019, when the "Starry Sky" intelligent analysis system using AI technology is applied across the Beijing-Shanghai high-speed railway, AI technology is used to analyze the photos that have been taken, and it only takes 4 days to complete a routine inspection.

Since August 2021, the "Starry Sky" 4C (Catenary Suspension Status Monitoring Device) intelligent analysis system jointly developed by the three parties has successively completed 6 railway bureaus and 13 line catenary 4C image recognition organized by the Ministry of Industry and Electricity of China National Railway Group The comparative analysis work has achieved remarkable results. "The catenary maintenance master works in the starry sky at night, fearless of the cold and heat, fear of hardships and hard work, and guards the safe operation of the high-speed rail. We finally decided to name the intelligent analysis system "Starry Sky"" .

From "seeing, hearing and asking" to "seeing CT"

“In the past, the work of high-speed rail inspectors was like traditional Chinese medicine. They needed to'see, hear, and ask'. When the 4C equipment went online, the high-speed rail would have “eyes”, and the work of inspectors became “seeing CT'.” Deputy Chief Engineer, China Railway Electrochemical Institute, Li Feng, head of the Beijing-Shanghai high-speed rail catenary design, said.

An important project of high-speed rail operation and maintenance is the high-speed rail contact network, which is a transmission line that is erected along the railway line to supply power to electric locomotives, including power poles, contact wires, and hanging strings.

The catenary will affect the power supply of the train.

In May of this year, due to the windy weather, foreign objects hung on the high-speed rail contact net, which caused dozens of trains to be delayed and suspended.

32 cameras are evenly distributed on the roof of the 4C catenary inspection vehicle. During operation at a speed of 80 kilometers per hour, it relies on infrared induction to capture all the catenary parts in all directions.

In the pictures taken by the inspection vehicle, the inspection engineer can see the obvious defects of various parts such as loose bolts, broken insulators, and broken suspension strings, just like a doctor "seeing CT".

At the Beijing-Shanghai High-speed Railway Maintenance Company, there are 20 people in the team responsible for "seeing CT", and about 12 million pictures need to be analyzed every year.

The detection of potential hazards in the high-speed rail catenary often requires the judgment of inspection engineers who have worked for many years and are experienced.

"In the past, the training of testing engineers generally took 6 to 8 years." Zhu Haiyan, deputy director of the testing center of Beijing-Shanghai High-speed Railway Maintenance Company, introduced.

Moreover, the average number of views of about 600,000 pictures per person per year is a huge test for people's eyesight and psychology.

Is there a way for novices to quickly learn from the experience of "masters"?

Let the detection efficiency of new employees exceed the "master"

In the "Power Supply AI Visual Analysis R&D Center" office of the Beijing-Shanghai High-speed Railway Maintenance Company of China Railway Electrification Bureau, many inspectors are looking at the pictures taken by the 4C system at the computer. Many of them are newly graduated "90s" or even " After 95".

"Our youngest employees have just graduated and joined in July and August this year, but they may be better at detecting component defects than a master who has seven or eight years of experience." China Railway Electrification Bureau "Xingkong" system is responsible. Li Zhaoyu said.

This benefited from the application of the "Starry Sky" intelligent analysis system using AI visual detection and analysis technology provided by SenseTime in the entire Beijing-Shanghai high-speed rail line.

The use of artificial intelligence technology to help determine the problems of the high-speed rail catenary is an important research direction, which can greatly reduce the burden of manual viewing of pictures.

Li Zhaoyu introduced that in June 2020, the "Starry Sky" system completed the human-machine competition. The verification algorithm was significantly better than manual in the detection of small parts (nuts and cotter pins), and the product detection efficiency reached 3 times the manual efficiency.

As of June 2021, the starry sky system model version has undergone 5 upgrades, which can identify 101 types of parts and 57 major types of defects.

The "Starry Sky" system, which cooperates with SenseTime to apply artificial intelligence technology, solves several major pain points of manual viewing of pictures. "The level of inspectors and analysis standards are uneven. In a group inspection test for everyone, different groups of people look at the same group. The final overlap rate of the pictures is only 20%, which shows that we urgently need a unified standard; in addition, in addition to the huge amount of pictures, each picture has more than 30 defect detection points, and manual inspection needs to enlarge and analyze each defect one by one. , It is very easy to have the risk of missed inspection." Li Zhaoyu said.

After the introduction of the "Starry Sky" system, with the help of AI, the high-speed rail catenary image detection is carried out in the form of intelligent recognition + manual review, and the number of suspected defects detected can reach 3 to 8 times the number of pure manuals.

How is "Hot Eyes and Golden Eyes" made?

If the 4C equipment gives high-speed rail a pair of "eyes", then the "starry sky" system is tantamount to training these eyes into "golden eyes".

It does not happen overnight.

"The landing of AI products must combine technology with industry knowledge and manual experience. In the design of the starry sky system, the installation and fastening methods of hundreds of types of parts on the high-speed rail contact network are considered. The product design refers to industry standards and combines expert experience Only by inputting the defined data into the computer for training can the computer be taught to recognize the defects.” said Xiao Xu, the person in charge of Starry Sky Products of SenseTime.

In fact, the amount of computing required for machine learning is beyond ordinary people’s imagination. Song Jianfeng, deputy director of SenseTime’s system architecture, said, “At present, there are as many as thousands of catenary defects that need to be identified. This requires the use of SenseCore based on SenseCore. A supercomputing platform for large AI devices. The platform is composed of tens of thousands of professional GPUs, which can complete several years of computing on a desktop computer in one minute."

With the continuous accumulation of "Starry Sky" system data, it has also made it possible to predict possible failures in the future.

The "Starry Sky" system can accurately locate the pole number of each pillar and establish a data file for management.

"When analyzing failed parts, we can go back to whether there is a tendency to fail in a period of time in the past. In the future, we will be able to predict possible failures in advance." Li Zhaoyu said.

Today, the "Starry Sky" system has been applied across the Beijing-Shanghai high-speed railway, making silent contributions to the safe operation of the high-speed rail and the convenience of passengers, and it also gives the maintenance personnel who work under the "starry sky" more peace of mind and companionship all the year round.

Picture of this edition/Picture provided by interviewee