Real estates in many places are sold at a discount under the name of "Work-to-House", the official response: it is a corporate market behavior   The Paper Journalist Liu Chang   Recently, many real estates have launched price-reduced houses in the name of "work-to-home" and "group buying". Some houses have been sold at a 30% discount after 5 months. Buyers have questioned that it is a means for 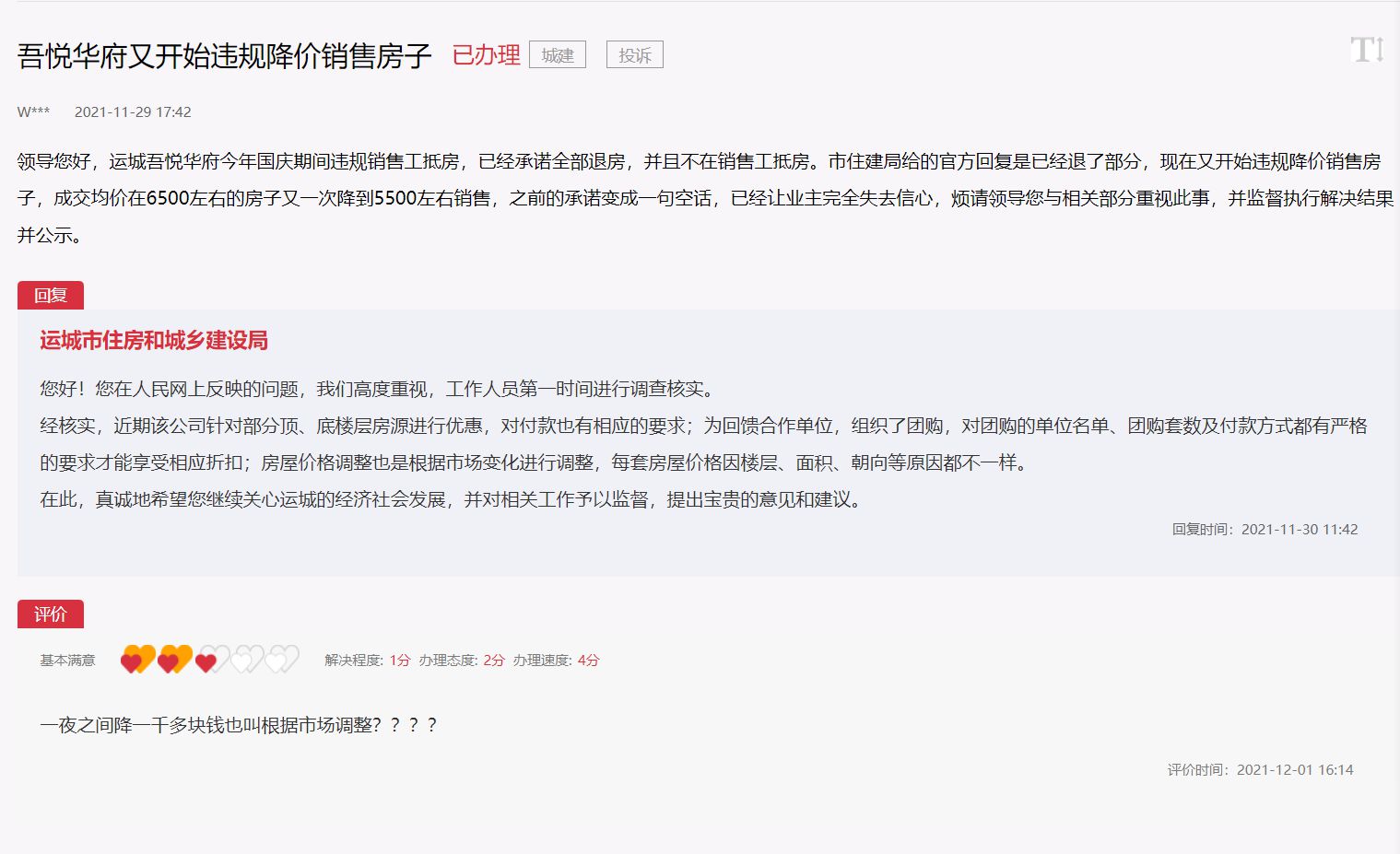 Real estates in many places are sold at a discount under the name of "Work-to-House", the official response: it is a corporate market behavior

Recently, many real estates have launched price-reduced houses in the name of "work-to-home" and "group buying". Some houses have been sold at a 30% discount after 5 months.

Buyers have questioned that it is a means for real estate companies to cut prices in disguise to sell real estate.

On December 6, The Paper saw on the message board of the leaders of People's Daily Online that some netizens reported that “Illegal sales of houses in Wuyue Huafu, Yuncheng City, Shanxi Province, during the National Day this year... Now I have begun to sell houses illegally again, with average transaction prices. The house at around 6,500 yuan has once again dropped to around 5,500 yuan for sale."

Calculated based on the above-mentioned price drop, the new sales price is about 15% off the original average price.

The Housing and Urban-Rural Development Bureau of Yuncheng City, Shanxi Province stated that, after verification, the company recently offered preferential treatment to some top and bottom floors, and has corresponding requirements for payment; in order to give back to cooperative units, it organized group purchases and provided group purchases to units that bought them. The list, the number of group purchases and the payment method all have strict requirements to enjoy the corresponding discount; the price adjustment of the house is also adjusted according to market changes, and the price of each house is different due to factors such as floor, area, and orientation.

The Paper has noticed that "work-to-home" has become a key word for many home buyers to report that real estate sales are in disguised form, but it is difficult to verify the authenticity of work-to-home listings.

"Work-paid housing" refers to a mortgaged house. For the construction or development of subsequent projects, the real estate developer seeks financing from banks or real estate related industries (such as builders, material dealers, etc.). The real estate project mortgaged by the loan has not yet been The property rights or use rights of all (or part) of the houses sold.

Another netizen left a message saying that Greenland City in Dazhou City, Sichuan Province claimed to have 5 sets of so-called workers' housing, with a total price of more than 300,000 yuan and a unit price of 3,500 yuan, which must be paid in full.

The netizen said that as soon as the news came out, people who bought a house in Greenland City were worried and afraid, did they run away with the funds from the sale in a disguised form?

The price-cut houses involve Building No. 6 in the No. 2 plot of Greenland City, and the average price of the houses sold for the project is about 4,050 yuan per square meter.

In addition, the average price of houses sold in Building No. 6 of Greenland City's No. 2 plot is about 4,600 yuan per square meter.

At present, there is no record price for real estate in Dazhou City,

and the price reduction of enterprises is affected by the market environment and belongs to the commercial market behavior of enterprises.

The Crane Research Center believes that there are two main types of housing on the market. One type is "real housing", that is, the normal housing mortgaged by the developer to the supplier and construction party. Generally speaking, this type of housing The number of rooms will be small, mostly in single digits.

This form of price adjustment can also balance the emotions of old owners and avoid rights protection problems.

According to the CRIC monitoring of the Crane Research Center, since September, the number of "employees in housing" on the market has increased sharply. This is mainly due to two reasons: the market has turned cold, the real estate companies are not selling smoothly and even the inventory is overstocked, which affects the company's payment. .

According to CRIC data, in October 2021, the real estate market continued to cool down. In October, the monthly trading performance of TOP100 real estate companies dropped by 32.2% year-on-year. Since July, it has shown a year-on-year decline for four consecutive months.

The regulation and upgrading of real estate financing has tightened, and bond issuance has been blocked. The funds in place for real estate development have fallen for 4 consecutive months.

Judging from the data released by the Bureau of Statistics, since July 2021, the total amount of funds in place by real estate development companies has shown a downward trend for four consecutive months.

In the past three years, except for January-March 2020 during the epidemic period, this value has shown a year-on-year growth trend, and this continuous decline shows that the pressure on real estate companies is huge.

However, according to CRIC data, cities such as Guangzhou, Nanjing, Suzhou, and Xiamen all ushered in a period of weakness in October, and third- and fourth-tier cities such as Guilin and Xuzhou also performed flat or even under pressure. Therefore, the number of workers’ housing and the city’s popularity became negative. Related relations, the number of urban workers in the downward market tends to be more.

The sharp price cut was investigated by the government

The Paper also found that the local government has also intervened in some properties whose price cuts are too large.

On November 11, a netizen in Shenyang stated that they bought Longhu Henglian Tao Li Fanghua House in May this year. At that time, the purchase price was less than 13,000 yuan per square meter. Now five months later, Longfor maliciously cut the price, and the unit price of the high-rise building was 8,000. The unit price of a western-style house is 10,000 yuan, which is far lower than the requirement of not less than 5% specified by the Real Estate Bureau.

Netizens request compensation at the current price, or check out, the deed tax and interest arising from the purchase of the house shall be borne by Longhu.

It can be seen that after 5 months of the project, the house buyers bought a 30% discount.

The Secretary of the Shenbei New District District Committee of Shenyang City, Liaoning Province replied on November 16 that the district committee attached great importance to it and immediately instructed relevant functional departments to investigate and understand.

The staff of the Real Estate Bureau contacted the developer and informed the developer that it is forbidden to sell at a price lower than the record price, and special circumstances in the company’s sales must be reported.