The number of users has skyrocketed, where will the new track develop?

Where does the e-sports industry go? At the 2021 China International Intelligent Industry Expo, the audience will experience a mecha fighting game. Xinhua News Agency The EDG team won the championship and 8 games were selected as the official events of the Hangzhou Asian Games... Recently, news from the e-sports circle has been constantly scanning the social network, bringing the once niche e-sp 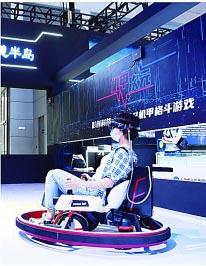 Where does the e-sports industry go?

At the 2021 China International Intelligent Industry Expo, the audience will experience a mecha fighting game.

The EDG team won the championship and 8 games were selected as the official events of the Hangzhou Asian Games... Recently, news from the e-sports circle has been constantly scanning the social network, bringing the once niche e-sports into the field of vision of more people.

From suffering from the prejudice of "do not do business properly" to gaining honors on the international stage, China's e-sports has grown hard all the way.

The huge audience group, the successively promulgated support policies, and the continuous expansion of the industrial culture of the border have made the e-sports industry a new industry with great potential.

At the same time, how to deal with problems such as the scarcity of professional talents, low social recognition, and immature organization and management system is still the key to the long-term sustainable development of the e-sports industry in the future.

"Break the circle" attack: the number of users surges, and e-sports are popular

On November 5th, the Hangzhou Asian Organizing Committee announced that 8 projects including League of Legends, Kings of Glory, and Peace Elite were selected for the official competition of the 2022 Asian Games in Hangzhou.

Prior to this, the e-sports project has always appeared on the stage of the Asian Games as a performance project.

E-sports "fires out of the circle", and various events and industry news continue to appear in the public eye, allowing the mainstream society to gradually understand and begin to re-examine this new industry that young people are enthusiastically seeking.

In recent years, the rise of mobile games and the popularity of live broadcasts and short videos have given e-sports games a huge user base.

Since 2020, affected by the new crown pneumonia epidemic, people's online entertainment time has increased significantly, and the scale of e-sports game users has expanded rapidly.

In October of this year, the League of Legends mobile game quickly climbed to the top of the download list as soon as it was launched, with a turnover of more than 1.1 billion yuan in the first month.

A large number of amateur players have evolved into e-sports users whose core needs are to watch e-sports games.

Statistics show that the number of e-sports users in my country has reached nearly 500 million, an increase of 350% from 2015.

The online viewing of major events confirms the popularity of e-sports.

According to data disclosed by Tencent, during the 2021 League of Legends World Championship (S11), the number of viewers per minute exceeded 30 million, and the peak number of viewers was about 73.86 million.

Although my country's e-sports started relatively late, the influence generated by the huge number of audiences has become the basis for its rapid development.

"The huge user scale of China's e-sports market has driven e-sports to continuously break through the original boundaries and make the leap from community culture to pop culture." Wang Xiaohui, Dean of the Institute of 5G Smart Media Communication and Industry of Communication University of China, pointed out that as the industry continues to increase its size With the increase in public recognition, China has grown into the largest single market in the global e-sports industry. The core audience of e-sports and the revenue of e-sports are both ranked first in the world, standing at the forefront of the development of the global e-sports industry.

From the birth of the first batch of e-sports clubs in my country at the beginning of this century, to the establishment of the China E-sports Club League in 2011, to winning gold and silver in major international competitions, China’s e-sports has always been developing in difficult exploration. A relatively complete club management system has gradually formed, and the e-sports industry has gradually become standardized.

This signifies that the identity of a practitioner in the e-sports industry has gained social recognition.

In the context of related policies, more and more people are beginning to look at the e-sports industry positively. E-sports is no longer synonymous with "Internet addiction teenagers", but as a formal project, it embarks on the road of professional and industrial development and has become Emerging cultural symbols that affect a generation.

The S11 season just ended, the League of Legends spin-off animation "War of the Two Cities" was officially launched, and it quickly became a "popular". In just one month, the cumulative number of views on Tencent Video exceeded 300 million, and it received a Douban score of 9.2 and an IMDb score of 9.4. High score.

Not long ago, King of Glory also officially announced a series of IP plans including movies, animated dramas, and musicals.

Popular e-sports projects have begun to expand the industrial boundaries, tap the content and cultural value of game IP, and integrate into the "pan-entertainment" ecology.

Driven by the fiery fan economy and various policies, the e-sports industry has entered a fast lane of rapid development, and the industrial structure has been upgraded in an orderly manner.

According to iResearch's data, in 2020, the overall market size of the e-sports industry will be close to 150 billion yuan. The scale of competitions, clubs and related markets will exceed 12 billion yuan.

Under the ever-expanding market demand, in recent years, major companies have begun to make in-depth layouts in the field of e-sports-Suning established the SNG team in 2016; JD.com acquired QG in 2017 and reorganized into the JDG team; in October 2018, Bilibili E-sports was formally established as a subsidiary of Station B, and the BLG Club and the Hangzhou Lightning Team were established one after another; in 2020, Weibo and Kuaishou acquired the TS team and the YTG team respectively.

Internet companies not only enter the arena through the formation and acquisition of teams, but also combine their own content media advantages to train e-sports anchors and commentators, and develop diversified businesses such as event production and artist brokerage.

At the same time, various localities have brought together urban culture and e-sports by organizing city competitions and other ways to explore the integration of e-sports and cultural tourism. E-sports has gradually become a new urban cultural symbol, driving regional tourism and commercial development.

Wang Xiaohui said that it is foreseeable that in the next few years, e-sports + 5G and e-sports + VR will be hot development directions.

In the new digital scene, e-sports is undoubtedly an important part of the new form of digital sports. This trend will deepen with the development of information technology, bringing development potential to all aspects of the sports industry, e-sports and digital The scenes are fully integrated to release more opportunities.

In addition, with the help of e-sports + traditional culture, it is also very promising to realize cultural dissemination and cultural outreach.

In May of this year, the “Cultural and E-sports Star Promotion Program” jointly initiated by Chengdu Jinsha Site Museum, Chengdu Xinfeixiang Technology Group and the e-sports team became a model of cross-industry integration of “e-sports + cultural-boss”. The design and development of "Wenbo" IP derivatives realize the ecological linkage in the field of digital cultural and creative industries.

From "games" to "competitions", from "competitions" to "industry", the e-sports industry gradually bid farewell to the reckless era, step by step on the right track, and grow into an important driving force for the development of the new economy.

E-sports education: the gap of professional talents is still huge

At the end of the S11 season, the translator in the interview after the EDG championship became "fire", and her fluent Chinese, Japanese and Korean trilingual switching seamlessly surprised audiences all over the world.

This young lady is Xia An, the official English host of the League of Legends Professional League who graduated from the Department of Philosophy at the University of Hong Kong.

The e-sports industry is now attracting countless outstanding young people like Xia An to join it.

The opening of the second International College Student E-sports Festival is coming soon. Not only is there a lot of registration for e-sports competitions, anchor competitions, creative competitions and other competition sections, it also provides a practical platform for students who wish to engage in e-sports-related work in the future.

As the founder and director of the International College Student E-sports Festival, Wang Xiaohui said that last year’s event aroused a enthusiastic response. This year the scale of the event has expanded across the country. E-sports students from the school have participated in the organization and obtained practical opportunities. In-depth understanding of the e-sports industry through the linkage between enterprises and schools.

Is the e-sports major really teaching students to play games?

In June of this year, the e-sports majors of Communication University of China and Nanjing Institute of Media and Communication welcomed the first batch of graduates. They entered Internet companies, game companies, media organizations, e-sports clubs, etc. to engage in e-sports related work.

In April 2020, the kick-off meeting for the development of national vocational skills standards for e-sports players and e-sports operators was held. At the meeting, it was pointed out that the current number of e-sports practitioners in my country is only 50,000, with a talent gap of 500,000.

From the perspective of the entire industry chain, from brand building, event planning and execution to club management and operation, there is a large talent gap, and there is also a large demand for compound talents and high-level management talents.

"As for the core professional teams and professional players, there is currently no institutionalized and process-based selection and cultivation mechanism. Players are more of a'genius' type of misplay. At the same time, the live broadcast of e-sports events and the coordinated operation of e-sports events , Professional commentary on e-sports and other related professionals.” According to Wang Qinglin, vice president of iiMedia Consulting Research Institute, from the current situation, most of the practitioners have taken the path of professional players after retiring and engaged in related work, and specially trained less.

"Talents are the core resource and the guarantee for the development of the industry. Schools and industries need to cooperate closely." Wang Xiaohui said that the long-term sustainable development of the e-sports industry in the future requires continuous improvement of the talent training mechanism, construction of e-sports training institutions, and expansion of talent selection. Channels to achieve professional development.

At the same time, as an emerging industry, e-sports also needs to improve the management system, including improving policies and regulations, and building an electronic management center, so as to spread high-quality content and reflect cultural charm with high-quality games.

On April 21, 2005, World Elite (WE), the first international e-sports club established by the Chinese, was established.

In 2011, the China E-sports Club League was established to manage professional league participating clubs and professional players. Well-known domestic clubs such as WE, IG, LGD, etc. are all members of the league.

In 2012, the IG team won the Seattle DOTA2 International Invitational (TI2) championship; in the same year, it won the WCG World Finals championship.

On September 6, 2016, the Ministry of Education announced the "Professional Catalogue of Higher Vocational Education (Specialty) in General Colleges and Universities", which added the "E-sports and Management" specialty.

In August 2018, at the Asian Games in Jakarta, Chinese e-sports players won gold medals in the League of Legends and the King of Glory International.

In April 2019, the 13 new professions released by the Ministry of Human Resources and Social Security included two professions, e-sports operators and e-sports players, and e-sports practitioners were officially recognized.