The digital economy, how to make steady progress in "changing lanes and overtaking"

The digital economy, how to make steady progress in "changing lanes and overtaking" At the 2021 China International Digital Economy Expo, staff are operating smart mirrors. Xinhua News Agency 【Economy Interface】 Scan codes and ride shared bicycles, participate in remote meetings online, "buy, buy, and buy" on the e-commerce platform; a large number of devices are connected to the online cloud, 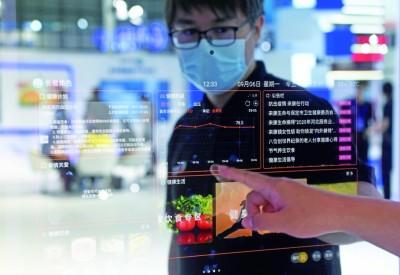 The digital economy, how to make steady progress in "changing lanes and overtaking"

Scan codes and ride shared bicycles, participate in remote meetings online, "buy, buy, and buy" on the e-commerce platform; a large number of devices are connected to the online cloud, and massive data is transmitted in milliseconds. More and more industries and companies are accelerating their digital transformation...Nowadays , A variety of digital technology applications are changing people's production and life.

In particular, since the outbreak of the new crown pneumonia epidemic, online education, telemedicine and other new businesses have developed vigorously. Digital technology and digital economy have played an important role in supporting the fight against the epidemic and restoring production and life.

On October 18th, General Secretary Xi Jinping emphasized in the 34th collective study of the Political Bureau of the CPC Central Committee that we must stand at the height of coordinating the overall strategy of the great rejuvenation of the Chinese nation and the great changes unseen in a century, and coordinating the domestic and international situations. , Development of the two major issues of security, give full play to the advantages of massive data and rich application scenarios, promote the in-depth integration of digital technology and the real economy, empower the transformation and upgrading of traditional industries, give birth to new industries, new formats and new models, and continue to become stronger, better, and bigger. economy.

In recent years, China Mobile has promoted the in-depth integration of 5G, artificial intelligence, and the Internet of Things, and played the role of digital technology in amplifying, superimposing, and multiplying economic development. It has launched more than 3,000 commercial applications in sub-sectors such as smart factories, smart medical care, and autonomous driving. Case.

"With the in-depth development of a new round of technological revolution and industrial transformation, information technology is increasingly integrated into the entire process of economic and social development in all fields. The rapid development of the digital economy, the wide range of radiation, and the depth of influence have never been unprecedented." Yang, Chairman of China Mobile Jie said.

The South of Colorful Clouds is a tourist destination that many people yearn for.

Not long ago, Xu Zhiyong, a young man born in the 90s, "checked in" Yunnan Kunming, Dali and other places.

He found that through the "Traveling Yunnan on a Mobile Phone" App, it is very convenient to buy tickets, find public toilets, check guides, and book hotels.

In addition, Yunnan Province has also launched the "Yunpinhui" App, which has attracted many companies to settle in, providing tens of thousands of products for consumers to choose from.

Not only Yunnan, but also across the country, all regions are actively "embrace" the digital economy.

"Big data is a new factor of production, and it is the'oil' of the 21st century; the digital industry is a new industry that focuses on human capital investment, has short research and development cycles, and fast technological iterations. It is a typical'changing and overtaking' industry. "Lin Yifu, Dean of the Institute of New Structural Economics of Peking University, said that my country has the conditions for relatively complete digital infrastructure, large domestic market, and abundant data elements.

Since the 18th National Congress of the Communist Party of China, my country's digital economy has developed rapidly and achieved remarkable results. The Internet, big data, artificial intelligence, etc. and the real economy have been deeply integrated, various application innovations have emerged one after another, and digital industrialization and industrial digitization have accelerated.

According to the "China Internet Development Report 2021", China's digital economy will reach 39.2 trillion yuan in 2020, accounting for 38.6% of GDP, maintaining a high growth rate of 9.7%, and becoming a key driving force for stable economic growth.

According to Zhang Li, president of the China Electronics Information Industry Development Research Institute, in the first half of 2021, many core industries of the digital economy, including electronic information manufacturing, software, and information technology service industries, will grow by more than 20%.

The trade in digital services such as telecommunications, computers and information services has grown substantially, fully empowering the recovery and growth of production, investment, consumption, and trade, and the role of new drivers of the digital economy has continued to increase.

"The digital economy is not only getting heavier and heavier, but it also makes economic transformation and upgrading more powerful and makes high-quality development more effective." said Zhao Zhiguo, director of the Information and Communication Administration Bureau of the Ministry of Industry and Information Technology.

Lin Yifu believes that at present, my country has formed new advantages in the field of digital economy.

my country's advantages in the digital economy can penetrate into various industries in the real economy.

Accelerating the digital transformation of industries will not only enable my country's digital economy to reach or exceed the level of developed countries as a proportion of GDP, but will also promote the real economy with manufacturing as its core to achieve quality and efficiency improvements.

At the same time, some experts said that the development of my country's digital economy still has the problem of uneven development among different regions, industries, and enterprises. The foundation of digital technology and the control of the industrial chain value chain need to be improved.

"The '14th Five-Year Plan' is an important period of opportunity for the development of the digital economy, and there is huge room for development." Sun Ke, deputy director of the Policy and Economic Research Institute of China Academy of Information and Communications Digital industries such as data will drive more than 60 trillion yuan in economic output.

Xiao Yaqing, Minister of the Ministry of Industry and Information Technology, said that the digital economy represents new productivity and new development direction, and is an important highland for global technological innovation.

It is necessary to follow the trend of digital development, adhere to the basis of development on innovation, complete, accurate and comprehensive implementation of the new development concept, with technological innovation as the core, data empowerment as the key, emerging information infrastructure as the foundation, and integration of talents For support, promote digital industrialization and industrial digitization.

2. Empowering the real economy is where the outlet lies

"On the basis of the traditional e-commerce model, we have introduced a shopping process of'identify first, ship later', which has stimulated the creation of new professions such as authenticators and provided a large number of job opportunities for the market." Yang Yang, founder and CEO of Dewu App Bing said that as a new generation of trendy online shopping community, Dewu App guides young people to love the country trend, so that more national trend brands have better development space, enhance the influence of time-honored brands among young people, and help related companies to improve Original content production, design and business model innovation capabilities.

In the smart workshop of a garment manufacturer in Ningbo, it only takes 45 minutes from the yarn to the equipment to produce a piece of clothing.

Compared with traditional manual production, this "intelligent manufacturing" using technologies such as the Industrial Internet can save 80% of manpower and greatly improve production efficiency.

"As all walks of life embrace digitization and intelligence, the main target of Internet services has evolved from users to industry and society." Tang Daosheng, senior executive vice president of Tencent Group and CEO of the Cloud and Smart Industry Group, believes that in the past 20 years, Consumer Internet has accumulated a large number of Internet technologies, cultivated a huge online consumer market, and laid a solid foundation for digital technology to help the development of the real economy.

"Some companies are unable to do anything when actually facing digitalization, and some companies have no rules and regulations and are'going fast.' The end result may be detours in digitalization." Digital Economy Advancement, Information Technology Development Department, Ministry of Industry and Information Technology The relevant person in charge of the department suggested that the implementation of the national standard for the maturity of data management capabilities should be carried out to promote the release of the value of data elements.

At the same time, support enterprises to introduce data strategy into daily management operations through the establishment of chief data officers, and lead enterprises to build, activate and maintain data management capabilities.

In the view of Xiaojuan Changjiang, School of Public Management, Tsinghua University, the digital economy needs to be broadly empowered, that is, its connection boundaries and depth must continue to expand.

Whether it is consumption, tourism, transportation, or medical education, pension, and government governance, they are all application scenarios of the digital economy.

In the future, how to promote the integrated development of the digital economy and the real economy?

"The integration of the digital economy and the real economy is a dynamic and gradual process. Manufacturing companies must actively carry out digital transformation. The government must also issue policies to encourage digital companies to cooperate with traditional companies." Academician of the British Academy of Social Sciences, University of Oxford Technology and Professor Fu Xiaolan, director of the Management Development Research Center, said.

Liu Shouying, Dean of the School of Economics at Renmin University of China, believes that to promote the integrated development of the digital economy and the real economy, we must pay attention to the investment subjects and return on investment of digital infrastructure, and clarify the division of labor and boundaries between the government and the market.

3. Ensuring cyber security is the cornerstone of development

360 company adheres to the main business of security, reshapes network security with digital thinking, and builds a digital security system facing the future.

In the long-term actual offensive and defensive confrontation, 360 company has broken through a series of key technologies such as vulnerability mining, established a cloud security brain with security big data analysis as the core, and has captured 46 overseas advanced sustainable threat attack organizations in total.

"Human beings are moving towards digital civilization, and digital technology is opening up a bright future for us." Zhou Hongyi said that social governance, government management, business operations, and people's food, clothing, housing and transportation will all be built on software, data, and the network. The world's security is fragile. Sex is unprecedented.

Zhou Hongyi believes that in the process of digitalization, network security faces challenges such as environmental changes and escalating network threats.

Cyber ​​threats have surpassed traditional security threats and become the greatest threat in the digital age.

The complex security problems faced by digitalization must have systematic solutions.

"It is necessary to avoid possible risks, strengthen the governance of data elements, and promote healthy market competition." said Huang Bin, director of the domestic think tank department of the Institute of New Structural Economics at Peking University.

During the "14th Five-Year Plan" period, the Ministry of Industry and Information Technology will comprehensively improve the implementation of key equipment security inspections, network vulnerability management and other important systems for the basic communication network, which is a key information infrastructure, to further enhance the technical capabilities of network security threat monitoring, defense, and traceability, and make every effort to ensure The basic communication network operates safely.