Shentie's unblocked "North-to-south grain transport" channel, a steady stream of grains is transported to the south

China News Service, Shenyang, December 3 (Shen Diancheng and Liu Jiannan) At 0:48 on December 2, 1,260 tons of Yushu Huafang Agricultural Development Co., Ltd.'s rotating grain took the 45252 freight train out of Yushu Station and drove all the way to Hunan direction...   It is understood that since the first batch of grain rotation was shipped on November 23, China Railway Shenyang Bureau Grou 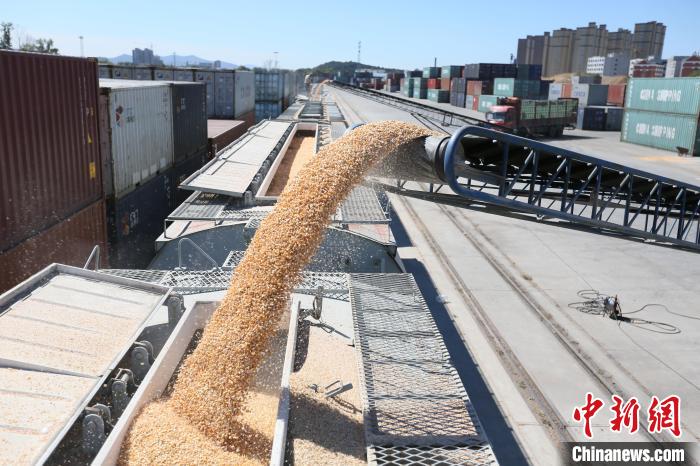 It is understood that since the first batch of grain rotation was shipped on November 23, China Railway Shenyang Bureau Group Co., Ltd. (hereinafter referred to as Shenyang Bureau Group Company) has conducted daily air allocation, alignment, loading, and transportation of the rotation grain. The whole process of the link is tracked station by station to ensure transportation demand.

At present, 51,000 tons of rotating grains have been shipped.

Since November, the Shenyang Bureau Group Corporation has vigorously unblocked the "North-South Transportation of Grain" channel, doing everything possible to ensure that this key material related to the national economy and people's livelihood is transported safely, smoothly, and efficiently to the south.

After entering November, it is the peak time for grain export from Northeast China.

The Northeast is an important grain production area in my country and is known as China's "granary".

In recent years, the proportion of grain output in Northeast China in the total grain output of the country has gradually increased, and the circulation pattern has changed from the previous “south-to-north transfer of grain” to “north-to-south grain transfer”.

After November each year, it is the peak time for grain outbound in the Northeast.

It is understood that since the listing of the new grain this year, the grain output of the Shenyang Bureau Group's economic attraction has increased by nearly 10% year-on-year.

Facing the reality of strong demand for grain transportation capacity, Shenyang Bureau Group Co., Ltd. actively adapts to changes in the market situation, strengthens the mission of national railway enterprises, actively connects with local government grain and material reserve authorities, large grain production and circulation enterprises, and establishes a daily communication mechanism with precision Grasp the storage of grain, policy-based grain purchases, the demand for rotation transportation and the demand for market guarantee transportation, increase the protection of resources such as containers and vehicles, and arrange the connection of transportation capacity in time to ensure the smooth flow of grain.

In order to smooth the "North-to-South transportation of grain", in the direction of "entry", Shenyang Bureau Group Corporation actively organized the traffic flow at the boundary between Shanhaiguan and Longhua, and vigorously organized the launch of direct and step-by-step grain trains to ensure high-quality and efficient grain The demand for transportation keeps food shipped to the south.

Since November, the Shenyang Bureau Group Company has loaded 1,639 trucks of grain per day on average, an increase of 802 trucks year-on-year.

The Shenyang Bureau Group Company also leveraged on the advantages of the port to carry out combined iron and water transport, unblocked the “sea” channel for the transportation of grain from the north to the south, and organized a whole train of containers and bulk grain trucks to be transported to ports such as Dalian and Yingkou in Jilin and Changchun. The seamless connection of ports and liner routes greatly reduces transportation time and provides strong support for the safe circulation of my country’s grain market and meeting the needs of the people’s lives.

In order to solve the problem of the shortage of empty food transportation trucks, Shenyang Bureau Group Corporation established a truck unloading supervision group, organized various stations and freight centers to establish a joint unloading team, strengthened the organization of fast pickup, fast delivery, and fast unloading, and made every effort to improve operation efficiency and unloading capacity. Grain transportation is seamlessly connected.

At the same time, organizations with large grain loading units such as Tongliao, Changchun Freight Center and Chifeng Depot have been organized to actively coordinate customers to use gondola wagons to carry grain. As of December 1, a total of 10,082 gondola wagons were used to carry grain.

For the past few days, the cargo yards in Changchun, Jilin, Baicheng, Tongliao and other regions, which are the main grain producing areas in the Northeast, have been busy scenes.

In order to ensure that the company's grain can be unloaded and loaded at all loading points, Changchun Freight Center will coordinate and organize the loading of freight yards and special lines in Fuyu, Yushu, Nong'an and other business offices where loading is concentrated, and maximize the release of loading capacity.

In order to alleviate the pressure of the shortage of container sources and special container flat cars, Jilin Freight Center organized 9 batches of bulk grain circulating trains directly to Dalian Port and Yingkou Port in Dunhua and Jiaohe areas based on actual conditions, which can effectively meet the needs of enterprises in grain outbound transportation. need.