400 camera accounts sell for 150 yuan   Since the beginning of this year, the Central Cyberspace Administration of China, together with the Ministry of Industry and Information Technology, the Ministry of Public Security, and the State Administration of Market Supervision, has deeply promoted the centralized management of illegal products such as camera peeping, and has violated citizens' privacy 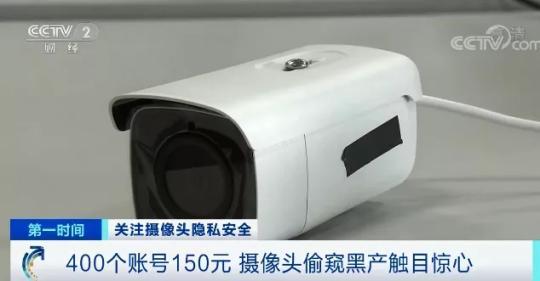 Since the beginning of this year, the Central Cyberspace Administration of China, together with the Ministry of Industry and Information Technology, the Ministry of Public Security, and the State Administration of Market Supervision, has deeply promoted the centralized management of illegal products such as camera peeping, and has violated citizens' privacy such as illegal use of cameras to peep personal privacy pictures, trade private videos, and teach peeping and sneaking techniques. Conduct centralized governance.

The pictures in this article are from CCTV News

Xiao Zhou, who lives in Beijing, told reporters that he is very busy at work. There are old people and children at home, and he is worried about not being able to look after at home. In order to save trouble, he bought a camera on the Internet for viewing. ".

Using some keyword searches, security technicians quickly discovered that there are a large number of groups related to camera peeping on some social platforms. Enter the related chat groups, and the chat content inside is more explicit. Some people send some real-time camera information from time to time. Picture.

Zhang Jiaqi, a senior engineer of the National Internet Emergency Response Center: The chat in the group is still relatively active. Some people will ask how to crack the camera and how to get the camera ID account.

The black product scanning tool can scan thousands of camera IDs in 1 minute.

Because many of the camera passwords are not changed, the initial default user name and password are used, so once they obtain these camera IDs, they can watch the real-time images of a large number of cameras.

According to the seller’s instructions, the security personnel downloaded and installed CloudView, and then used the software to scan the platform. After entering the user ID and password, a large number of real-time cameras appeared on the computer screen. The state of affection.

Liu Zhongjin, a senior engineer at the National Internet Emergency Response Center: The cameras peeped at the cameras sold by the black products, and most of them are facing private places such as hotels, homes, and bedrooms.

The information from these cameras has been repeatedly sold, and criminals have made huge profits from them. The leakage of these tens of thousands of camera images has seriously infringed on the privacy of citizens.

Interview to be removed from the shelves for rectification, the Central Cyberspace Administration of China made heavy blows on cameras to spy on black products

The reporter learned that in recent years, black products such as camera peeping have evolved and evolved, and the division of labor in the industry chain has become increasingly refined. How to manage problematic apps?

The Central Cyberspace Administration has also taken a number of measures.

Screening based on some keywords in the app store, we found more than 100 camera-related apps, of which 8 camera apps have some serious vulnerabilities

, such as UID (user identification) The generation algorithm is problematic, and the authentication mechanism for camera access is not perfect, that is, it has no way to distinguish between normal users and illegal users.

The Central Cyberspace Affairs Office instructed all local platforms to dispose of more than 30,000 pieces of harmful information related to camera peeping and illicit production, and more than 5,600 accounts involving illegal transactions and dissemination of harmful content; supervised the removal of "hidden cameras", "invisible filming" and other peeping Sneak shooting apps; talk to e-commerce platforms to urge them to remove peeping devices such as miniature cameras.

Guo Tao, deputy director of the Cybersecurity Coordination Bureau of the Central Cyberspace Administration of China: We conducted interviews with apps such as CloudView, LeVision, and Hichip that have some loopholes.

There are about 450,000 cameras that can be remotely peeped through the reports and monitoring of the masses in the early stage, and it is impossible to use all of them at present.

Guo Tao stated that in order to evade supervision and crackdowns, black-produced personnel often use false account numbers, springboard IP addresses, and other phone cards and bank cards to conceal their identities. At present, these behaviors have been effectively curbed. Regarding how individuals can prevent their cameras from being illegally peeped, experts are also Suggestions are given.

Liu Zhongjin, a senior engineer of the National Internet Emergency Response Center: First, buy big brands and cameras that have passed network security certification through formal channels to avoid being implanted in the back door; second, the camera should not be facing sensitive areas; third, the camera Modify the default password, it is best to modify it to a complex password, a strong password; fourth, keep the camera firmware and App updated regularly.