How to use an apple to drive 3 billion yuan in income in Yantai, Shandong 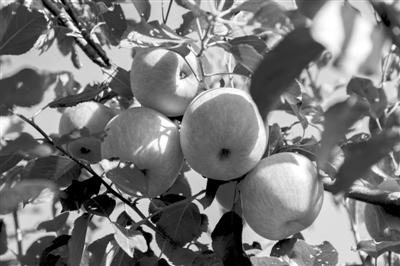 Starting in mid-October, the apples he planted entered the picking period; by mid-to-late November, the apples in the 500-acre orchard had been picked.

When interviewed by reporters on November 25, he was still immersed in the joy of harvest: “The apple variety we planted is the'Yanda No. 1'independently selected by the Jiang Zhongwu team of the Agricultural College of Yantai University. Good, strong scent, and considerable benefits."

The "Yanda No. 1" mentioned by Li Weijie is not ordinary.

In the past three years, the "Yanda No. 1" series of apple varieties, featuring a bright red, sweet and sour and delicious flavor, has been promoted and applied in the country by 1.6 million mu, increasing the income of farmers by 3 billion yuan.

What kind of apple is this?

"The new variety of'Yanda No. 1'has a strong tree with a large fruit size, with an average fruit weight of 318.6 grams. The fruit is bright red all over, with a soluble solid content of 15.1%, sweet and sour and palatable, with high quality. The average yield per plant in the full fruit period is 90.8 Kg, 5084.8 kg per mu."

This conclusion is the opinion given by the expert appraisal organized by Yantai Science and Technology Bureau.

However, in Jiang Zhongwu's view, the magic of "Yanda No. 1" is that the color of the fruit is striped at the early stage of maturity. After 7-15 days, the fruit "magically" becomes a full red fruit.

Jiang Zhongwu said that fruit farmers can make use of the outstanding advantages of "Yanda No. 1" discoloration and market demand to determine the picking time and ensure farmers' income.

A reporter from Science and Technology Daily learned that "Yan Da No. 1" is beautiful and delicious, but its development is somewhat accidental.

The apples that people usually see are diploid or tetraploid varieties, and the presence of diploid and tetraploid hybrids is unprecedented in Fuji apple varieties.

Through flow cytometry, Jiang Zhongwu's team found that this apple is a rare hybrid variety.

As if "smashed in the head by Newton's apple", Jiang Zhongwu discovered a "new world".

"The biggest advantage of'Yanda No. 1'is that it can use its mixed ploidy characteristics for breeding and hybridization. On the one hand, it can be promoted as a production variety, and on the other hand, it can be used as an excellent breeding material for the selection of other new varieties." Jiang Zhongwu told Reporter from Science and Technology Daily: In the process of crossing with other varieties, it can retain the advantages of "Yanda No. 1", but also facilitate the integration of the excellent traits of other varieties. It can breed triploid varieties, and its prospects are very optimistic.

The work Jiang Zhongwu is currently promoting is to let "Yanda No. 1" refer to where to play-not only to retain all the advantages of the Fuji variety, but also to achieve other shape changes through hybridization.

Yantai is the first place to cultivate apples in China.

As early as 1871, China's first apple tree was planted in Yantai Guangxing Orchard. Over the past 150 years, Yantai apples have undergone several generations of varieties and have been the number one brand in China's fruit industry for 12 consecutive years. The annual export volume even accounts for half of the country.

All this makes Jiang Zhongwu awe of Yantai Apple's research and development.

When he was young, he carried a map of Yantai and rode his bicycle around the fruit tree planting bases in Yantai.

Sitting in the field with the fruit farmers, chatting about the harvest.

"Apple planting is an industry with higher returns and lower risks!" Following this discovery, Jiang Zhongwu took apples as his main direction of attack.

In 1988, Jiang Zhongwu went to New Zealand to study, and after returning to China, he devoted himself to detoxification of apple seedlings.

In the process, he found that in order to realize the long-term development of the industry, it is necessary to have good varieties. "If we plant more and more food, we found that good varieties contribute more than 60% of the fruit industry's income."

What kind of fruit seedlings are good seedlings?

What Jiang Zhongwu didn't expect was that he devoted more than 30 years of youth to a good seedling.

In August 2014, Jiang Zhongwu was selected as an expert in the Taishan Scholar Seed Industry Program of Shandong Province, and he was the only apple seed industry expert among the selected.

R&D success is just the beginning

The successful development is the beginning of the story for "Yanda No. 1".

Aiming at variety promotion, in early 2020, the "Shandong Apple·Fruit Industry Technology Innovation and Entrepreneurship Community" jointly declared by Yantai Academy of Agricultural Sciences and Yantai University and other units was approved; six months later, Shandong Apple·Fruit Industry Technology Research Institute It was inaugurated and established, exploring the establishment of a technological innovation system with in-depth integration of "government-industry-university-research-funding". The institute signed a strategic cooperation agreement with Yantai University and invested 10 million yuan to build a research platform for the Apple industry...

With all efforts, the "Yanda No. 1" series of apple varieties have been promoted and applied in a total of 1.6 million mu in Shaanxi, Gansu, Xinjiang and Yanwei regions in Shandong in five or six years, and 400,000 mu of aged orchards have been updated and upgraded.

Chen Yibao, director of the Department of Social Sciences (Science and Technology) of Yantai University, told the reporter of Science and Technology Daily that "Yanda No. 1" is one of the key scientific research achievements cultivated by the school in recent years, and it is also a successful attempt to transform scientific and technological achievements of universities into actual productivity.

Facing the future, Jiang Zhongwu hopes that Yantai University and the Yantai Academy of Agricultural Sciences will continue to deepen their integration so that everyone can speak on the podium, work in the orchard, and write at the desk. The development of integration of production and education will help Yantai build The hundreds of billions of apple industry has allowed Yantai University's scientific research results to continue to be fruitful and prosperous on the branches of fruit trees.