Are bicycle prices going up in response to the "pandemic"? Does this new outlet make money?

Under the epidemic, bicycles ushered in a "pandemic" around the world. Since the beginning of this year, the price of upstream raw materials in the bicycle industry has soared, leading to varying degrees of increases in the prices of bicycle parts such as frame, handlebars and transmissions. Affected by this, some bicycle manufacturers have raised their product prices. Significant increase in r 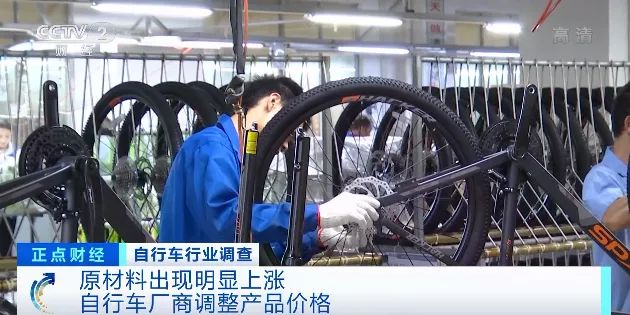 Under the epidemic, bicycles ushered in a "pandemic" around the world.

Since the beginning of this year, the price of upstream raw materials in the bicycle industry has soared, leading to varying degrees of increases in the prices of bicycle parts such as frame, handlebars and transmissions.

Affected by this, some bicycle manufacturers have raised their product prices.

In a bicycle manufacturer in Shenzhen, the reporter met with Zou Ri, a bicycle parts supplier who was delivering to the vehicle factory.

Zou Ri told reporters that his factory mainly uses aluminum alloy, magnesium alloy, steel and other raw materials into parts and components of shock-absorbing front forks and supplies them to bicycle manufacturers.

This year, because of the high increase in raw materials, he had to passively adjust the supply price.

It is understood that the price of raw materials in the bicycle industry was very stable in previous years, with few obvious fluctuations.

However, since last year, many raw materials used for bicycles have risen. This year, the price has not only continued to rise, but the increase has also been even higher.

An executive from a bicycle manufacturer in Shenzhen told reporters that this is the first time he has experienced such a long period of rising prices of raw materials since he started his career.

However, in the face of fierce market competition, bicycle companies cannot transfer all the pressure of rising costs to the downstream terminal sales market, so many companies still face huge operating pressure.

Xiao Xuguo, general manager of a bicycle company in Shenzhen: We adjusted it once in May this year, about 5%; in November, it was adjusted again, and it was also more than 5%.

There has never been a twice-a-year adjustment.

Yi Zhao, the person in charge of a bicycle store in Shenzhen: Our bicycle store started to adjust prices on November 13, and the entire line of products has risen by more than 15%.

In the face of various unfavorable factors, bicycle companies focus on the layout of mid-to-high-end models

At present, various unfavorable factors such as the increase in raw material procurement costs and the increase in export shipping freight have made competition in the bicycle industry particularly fierce, and also particularly tested the business ability of the company.

Many companies have seized market demand, stepped up innovation, actively deployed the mid-to-high-end bicycle market, and digested the impact of unfavorable factors such as rising raw materials.

Zhao Jinhua’s company mainly produces mid-to-high-end bicycles. Due to relatively high profits, the impact of rising raw material prices and freight rates on the company is not as great as that of most other bicycle manufacturers.

Zhao Jinhua, general manager of a bicycle company in Shenzhen: We mainly make mid-to-high-end bicycles based on carbon fiber. The shipping price is about US$500, which is about 3,500 yuan.

In a bicycle store in Shenzhen, the reporter met Ms. Cao who came to buy a bicycle.

Ms. Cao told reporters that after the outbreak, there were many young people like her who began to like to exercise by bicycle.

It is understood that while consumers’ requirements for bicycle product functions and appearance are gradually increasing, many bicycle manufacturers have begun to focus on mid-to-high-end bicycles with relatively high profits and more market competitiveness in the face of increasingly fierce market competition. .

As people’s requirements for bicycle functions are no longer limited to simple transportation, the market for mid-to-high-end bicycles such as mountain bikes and road bikes with sports, fitness, and leisure functions is gradually expanding. Put forward higher requirements.

Fu Wenzhou, chairman of a bicycle company in Shenzhen: After digesting the rising costs in all aspects of freight, our mid-to-high-end bicycle profits this year are still considerable.