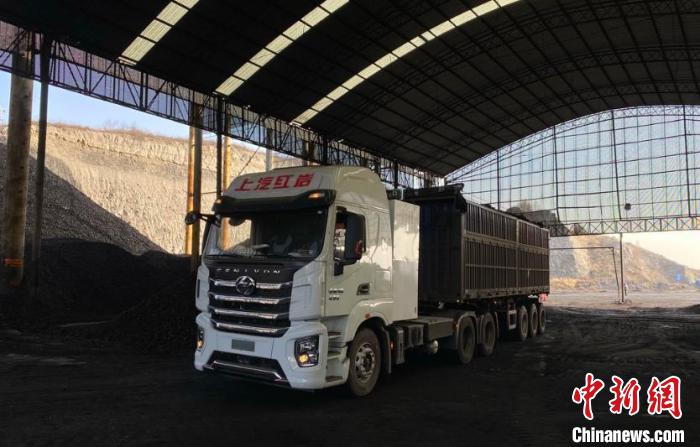 This batch of heavy trucks is the first batch of 6×4 hydrogen energy heavy trucks put into operation by SAIC Hongyan, and will be mainly used for transportation of Yijinhuoluo Banner Open-pit Coal Mine in Ordos City, injecting new vitality into the local construction of "North Xinjiang Green Hydrogen City".

Hydrogen energy, as a high-calorie, zero-pollution, and abundant energy source, its calorific value is about three times that of other fossil fuels, and it produces water after combustion, which is recognized as the cleanest fuel.

In the "Carbon Peaking Action Plan by 2030" issued by the State Council, it is mentioned that we will promote the low-carbon transformation of transportation equipment and actively expand the application of new energy and clean energy such as electricity, hydrogen energy, natural gas, and advanced bio-liquid fuels in the transportation field. Promote heavy-duty freight vehicles powered by electricity, hydrogen fuel, and liquefied natural gas.

According to He Zongjun, head of SAIC Hongyan Inner Mongolia branch, Ordos has rich mineral resources and requires a large number of heavy trucks. However, excessive heavy trucks have a great impact on the environment, and the heavy truck sector urgently needs to transform to new energy.

Ordos has sufficient wind power and can provide low-cost hydrogen, so that the cost of using hydrogen energy heavy trucks has dropped rapidly.

The picture shows that the heavy hydrogen trucks invested by SAIC Hongyan will be used for transportation in Yijinhuoluo Banner Open-pit Coal Mine.

In fact, SAIC Hongyan's first batch of hydrogen heavy trucks in Ordos put into operation is just a microcosm.

Under the "dual carbon" goal, the deployment of hydrogen energy vehicles "Made in Chongqing" is accelerating.

Recently, the General Office of Chongqing Municipal Government issued the "Chongqing City Supporting Hydrogen Fuel Cell Vehicle Promotion and Application Policy Measures (2021-2023)", which mentioned that subsidies for the construction and operation of hydrogen refueling stations, promotion of demonstration applications in public areas, and support for traffic convenience are given. Accelerate the pilot demonstration, promotion and application of hydrogen fuel cell vehicles, promote the development of the hydrogen fuel cell vehicle industry, and cultivate new growth drivers.

The reporter learned that, as an important national automobile industry base, Chongqing has 21 vehicle manufacturers and a complete vehicle product lineup.

Among them, three companies, SAIC Hongyan, Qingling Automobile, and Changan Automobile, have listed a variety of hydrogen vehicles, and subsequent hydrogen fuel cell vehicles will be developed and launched one after another.

On September 29, the Qingling Bosch hydrogen-powered truck filled 11.8 kg of hydrogen at the Sinopec Banshan Huandao Hydrogen Refueling Station in Jiulongpo District, Chongqing City, and then set off to Chongqing Western Logistics Park for cargo loading, and then drove to AMB Chengdu Longquan Logistics Center for cargo loading. The cargo is unloaded.

At present, SAIC Hongyan is accelerating the application of hydrogen heavy trucks.

Based on the rich hydrogen energy resources and abundant usage scenarios in Ordos City, in October this year, the world's first 10,000-unit hydrogen-energy heavy truck production base was also constructed in Inner Mongolia.

Changan Automobile has been developing hydrogen fuel cell vehicles for more than 10 years.

In recent years, Changan Automobile has participated in a number of national-level hydrogen vehicle project research. In March this year, Changan CS75 fuel cell passenger car was selected into the catalog of hydrogen vehicles of the Ministry of Industry and Information Technology.

The Chongqing Municipal Promotion of Hydrogen Fuel Cell Vehicle Industry Conference held at the 2021 China International Intelligent Industry Expo mentioned that by 2023, Chongqing will build 10 hydrogen refueling stations, promote 1,000 hydrogen fuel cell vehicles, and the number of industry chain companies will exceed 50. It has achieved an output value of more than 10 billion yuan.

The industry believes that the hydrogen energy injection time is short, the cruising range is long, and the carrying capacity is not large. The development of hydrogen fuel cell vehicles is the future direction of the sustainable development of the automobile industry.