For the first time since July: the dollar exchange rate at the Moscow Exchange approached 75 rubles

On Monday, November 22, the dollar exchange rate at the Moscow Exchange reached its highest level in the last 4.5 months and came close to 75 rubles. At the same time, the euro rate for the first time since the beginning of October exceeded 84.5 rubles. According to experts, the pressure on the Russian currency was exerted by the decline in oil prices, as well as the strengthening of the dollar on the international market. However, the tax period should provide support for the ruble in the near future, experts say. Moreover, the increase in the key rate of the Central Bank continues to play in favor of the national currency. How in these conditions the dollar and euro rates can change by the end of the year - in the material RT. 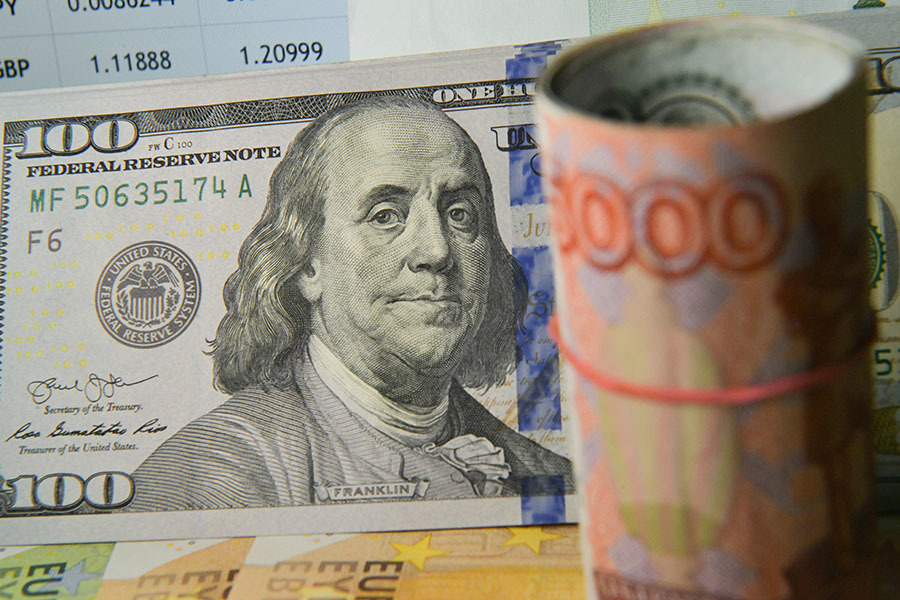 On Monday, November 22, the Russian currency depreciates on the Moscow Exchange.

The last time a similar meaning could be observed at the beginning.

The official exchange rate of the Central Bank on November 23 was set at 73.45 rubles per dollar and 82.77 rubles per euro.

The pressure on the Russian currency is exerted by the general strengthening of the dollar on the international market, says Anna Zaitseva, an analyst at FG Finam.

According to her, the observed dynamics is associated with the expected change in the monetary policy of the US Federal Reserve System.

Recall that in 2020, against the backdrop of the coronavirus pandemic, the Fed cut the interest rate to almost zero and launched a quantitative easing program.

The Fed began printing dollars and buying government bonds on the stock market.

Such a policy was supposed to lead to an increase in the money supply in the financial system and accelerate the economic recovery after the crisis.

At the same time, the actions of the Federal Reserve became one of the reasons for the acceleration of inflation in the United States.

To combat the rise in prices, on November 3, the Fed announced the gradual curtailment of the quantitative easing policy, as a result of which the American currency began to rise in price on the world stage.

So, since the beginning of the month, the dollar index (DXY) against a basket of other reserve currencies has grown by more than 2% and is now close to 96.2 points - the highest level since July 2020.

“Investors are waiting for an earlier normalization of monetary policy by the Fed.

In addition, against the backdrop of accelerating inflation, the leadership of the Federal Reserve increasingly began to sound assumptions about the advisability of raising the interest rate as early as next year.

Such expectations support the dollar, while risky currencies, including the ruble, are under pressure, ”explained Anna Zaitseva.

The correction of oil prices also played against the ruble, experts say.

Back in the first half of November, quotations reached $ 85.5 per barrel.

“Oil began to fall in price after the news that the United States, together with China and Japan, may start selling energy resources from their strategic reserves.

As a result of such actions, the supply of hydrocarbons on the global market should noticeably increase, so prices have already reacted to these messages with a decrease, ”explained Artyom Deev, head of the analytical department at AMarkets, in a conversation with RT.

However, as the specialist believes, in the near future the ruble may be supported by the tax period: at the end of the month, exporting companies will traditionally sell foreign currency and buy rubles to pay taxes.

The actions of the Central Bank continue to play in favor of the Russian currency, Anna Zaitseva noted.

Since the beginning of 2021, the regulator has already raised the key rate six times to curb inflation and brought it to the level of 7.5% per annum.

Moreover, earlier the head of the Central Bank Elvira Nabiullina did not rule out the possibility of another rate hike at a meeting in December - immediately up to 8.5%.

In addition to influencing inflation, the increase in the key rate of the Central Bank makes investing money in ruble assets more attractive for investors.

In particular, due to the actions of the regulator, the yield of federal loan bonds (OFZ) increases.

As a result, an additional inflow of investments into the OFZ market has a positive effect on the dynamics of the national currency.

“The rhetoric of the Bank of Russia remains very harsh.

The regulator sees the need for a further increase in the key rate to limit consumer lending, since the measures taken earlier do not yet give the desired effect to curb inflation.

The Central Bank's policy should support the ruble, ”Zaitseva explained.

Anna Bodrova, a senior analyst at the Alpari Information and Analytical Center, adheres to a similar assessment.

“In terms of supporting the Russian currency, a certain calmness of investors is now working.

In the absence of any extraordinary events on foreign markets, any exchange emotions will subside quickly enough.