China News Service, Beijing, November 19 (Zuo Yuqing) Recently, due to the huge price difference of ampoule masks during Double Eleven, related topics such as "L'Oreal accused of false propaganda", "Li Jiaqiweiya suspended cooperation with L'Oreal" and other related topics have been rushed. Hot search.   For many consumers, it seems "commonplace" for Double Eleven to be treated with a price dif 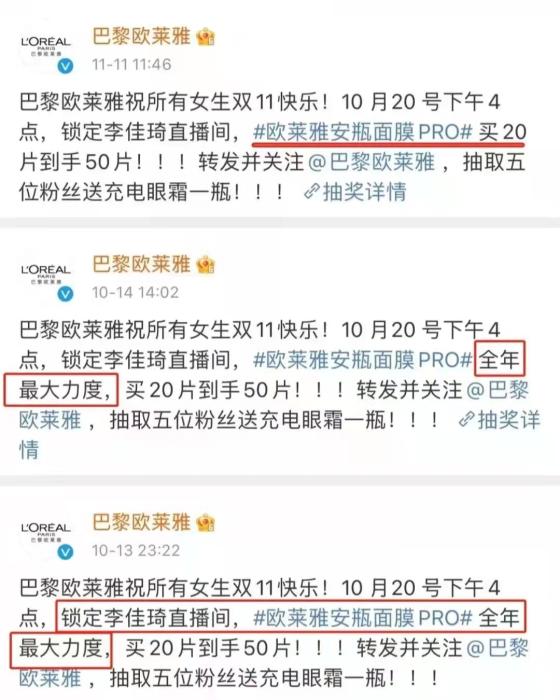 For many consumers, it seems "commonplace" for Double Eleven to be treated with a price difference. Why did L'Oréal spark such a big controversy this time?

"The most powerful of the year"

However, after the pre-sale ended, L'Oréal issued a large number of "over 999-200 yuan" coupons, resulting in a price difference of more than 100 yuan before and after the mask.

"L'Oréal's own promotion of the'maximum effort', out of trust in the brand, directly chose to place an order in the live broadcast room of the head anchor." Some consumers expressed dissatisfaction and demanded a refund of the price difference.

L'Oréal once advertised on Weibo as "the biggest promotion of the year".

"The announcement made by L'Oréal on its own official media platform should be regarded as the company's commitment to consumers. There is no doubt in law." Lawyer An Xiang, director of Beijing Dexiang Law Firm, told Chinanews.com.

L'Oreal is indeed suspected of false propaganda, consumers can complain through e-commerce platforms, 12315 and other methods

There is a price difference in Double Eleven products, and many consumers think of the price guarantee service of the e-commerce platform for the first time in their rights protection.

However, in the complaint, consumers found that the price "line of defense" they once thought did not work now.

Now L'Oréal's pre-sale product link has long been removed, and the insured service does not take effect at all

Chinanews.com noticed that although the merchants provided "full price guarantee" during the pre-sale period of the L'Oreal ampoule mask (after 0:00 on November 1st-before 0:00 on November 27), the platform's price insurance service standards are clear It stipulates, "

However, Chinanews found that it was not L'Oréal that removed the pre-sale products.

Many merchants have set up different sales links for the same product of the head host and self-operated, and the products pre-sold by the host will be removed from the shelves after the transaction

Although this can provide convenience for merchants to process orders, it is also difficult not to suspect that they are playing "flowers".

Is the head broadcast room a tool for brands to cut "leeks"?

"Does Li Jiaqi say that low prices mean low prices? Li Jiaqi is also just a hitman. He said that no matter how favorable the price is, it is decided by the official event planner." The contradiction was brought to light.

In the end, Di Jiating's compensation plan was to only give an additional box of formal mask.

In this regard, consumers do not buy it.

"I feel like I am regarded as the leek in the live broadcast room of the head anchor." Some consumers are outspoken about this.

After Li Jiaqi and Wei Ya successively announced the suspension of cooperation with L’Oreal, on the 18th, L’Oreal Paris issued two apologies and gave a solution: for the pre-sale on Tmall Double Eleven (10/20-10/31) During the period, consumers who purchase ampoule masks at the “L’Oréal Official Flagship Store” will issue different threshold-free coupons with different amounts according to the order amount. The expiration date is from the date of receipt to June 20, 2022 (see you on the date of receipt) Follow-up rules), and sincerely invite you to become a L'Oréal Paris Gold member to enjoy relevant benefits.

L'Oréal Paris stated that the specific collection and usage rules of the brand will be announced within 5 days.

L'Oréal Paris provides a solution to the problem of the price difference of the ampoule mask.

However, many consumers believe that the solution is insincere: "Using coupons instead of direct refunds means that consumers will continue to buy L'Oréal products."

Sino-Singapore Microcomment: Promise to delete if you want, how can brand promotion be a trifling matter

Regardless of whether there is a contradiction between the head anchor and the brand, who has misled the consumers? For consumers who place orders in the live broadcast room, it is not only the popularity of the anchors, but also the quality and credit of the brand.

Undoubtedly, during the Double Eleven period, both the brand and the top anchors have benefited from consumers.

But now, L'Oréal treats the public promise as a trifle, amending and deleting the "full year's greatest strength", but it is losing its image as a big beauty brand.

The double eleven promotional prices of big brands and top anchors may not necessarily be true.