The Vice President of Dubai Airports, Jamal Al Hai, said that the deals of the 17th session of the Dubai Air Show exceeded, until yesterday, the total number of deals signed during the previous session as a whole, noting that “Dubai Air 2021” is of great importance as it is the largest and the first air show since The start of the pandemic, dead 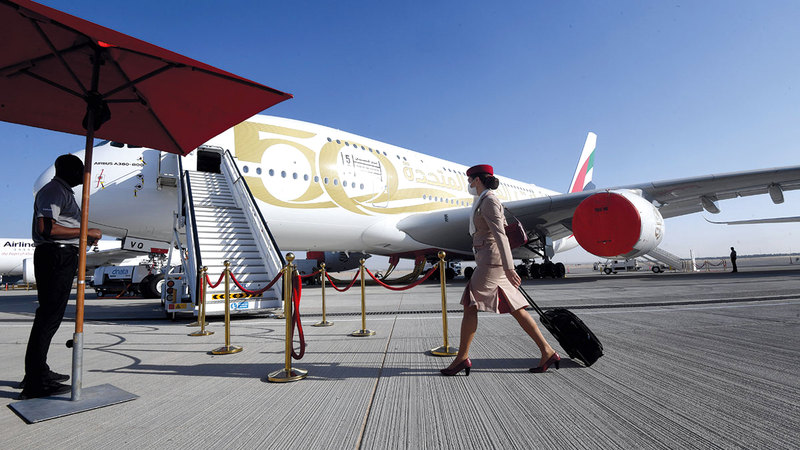 “Dubai Airports”: With the support of “Expo” .. and the efforts of the “Emirate” to lead the global recovery of the sector

The Vice President of Dubai Airports, Jamal Al Hai, said that the deals of the 17th session of the Dubai Air Show exceeded, until yesterday, the total number of deals signed during the previous session as a whole, noting that “Dubai Air 2021” is of great importance as it is the largest and the first air show since The start of the pandemic, and it is expected that Dubai International Airport will deal with 27 to 30 million passengers this year, based on several facts, most notably the positive impact caused by the “Expo 2020 Dubai” exhibition and its role in the gradual recovery of travel from the world towards Dubai, where it has become Expo is a microcosm of the world and a positive message about the future directions of the global economy.

Al Hai added, in a press statement on the sidelines of the exhibition, that the transport movement through Dubai International continues to record strong growth rates, as the numbers are expected to reach about 45 or 50 million passengers next year, noting that private air traffic continued its significant growth during the year. The current registered an increase of more than 300%.

He expected Dubai Airport to maintain its position as the largest air transport crossing in the world for the eighth year in a row this year in light of the numbers it records, explaining that the airport handled about 20.7 million passengers since the beginning of this year until October.

Al Hai said, "The Dubai Airshow is one of the largest international exhibitions specialized in the field of aviation and aerospace, and therefore, for the (Dubai Airports) team, it is an opportunity to learn about the best technologies and new players in the aviation industry and benefit from their expertise to develop our airports." Pointing out that "the exhibition attracted more than 1,200 exhibitors from various countries, which qualifies Dubai to lead the recovery process in the aviation sector worldwide."

Al Hai stated that the Dubai Air Show contributed to the increase in the movement of passengers through Dubai International Airport, explaining that there are several important factors that contributed to enhancing the movement of passengers at Dubai Airport, including the Expo 2020 Dubai, which has so far visited more than 3.5 million visitors. From inside and outside the country, as well as Dubai's continuous efforts to lead the global recovery phase for the aviation sector.

Al Hai said that the reopening of the "Concourse A" building at Dubai Airport during the next week, will restore the airport to its full capacity, indicating that the building was opened by 50%, but on the 28th of this month it will be fully opened, as the airport will operate at full capacity. Operational, bearing in mind that Dubai Airport has a capacity of more than 90 million passengers.

Al Hai indicated that 82 carriers are currently using Dubai Airport, as this number is greater than the number of carriers before the pandemic.

The Vice President of Dubai Airports, Jamal Al Hai, expected that the winter vacation season will witness a record increase in the number of people wishing to spend their vacations from various countries in Dubai.

He said that Dubai becomes at its most beautiful during the period between November and April, as it records a significant increase in the number of tourists and visitors, due to the improved weather and the distinctive tourist options that the city provides to travelers.

Al Hai referred to the facilities available with regard to obtaining visas to come to Dubai to visit the "Expo", saying that "all these data make us optimistic about a gradual increase in the number of travelers during the second half of 2021."