The red lines between Díaz and Calviño: agreements, 15% of the temporality, do the unions win or not? ...

The 2022 labor reform is much more than a clash between partners in a coalition government. The political noise covers what is truly important: if the new legal framework ... 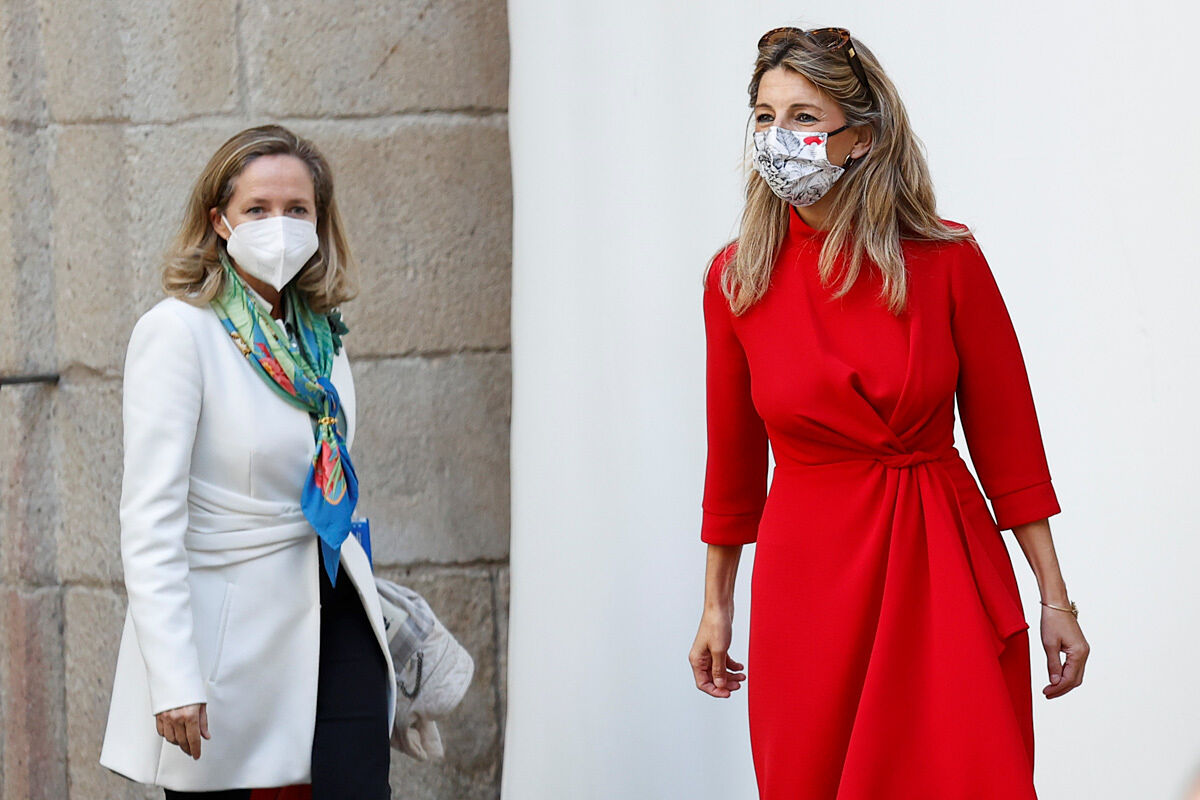 is much more than a clash between partners in a coalition government. The political noise covers what is truly important: if the new legal framework will be able to untie the knot that for decades has prevented the Spanish labor market from being

, in the sense that, to the challenges facing the future of work today (disappearance of professions, youth employment, employability of those over 55, productivity, quality of jobs, training, wages, transition from unemployment to activity ...) do not add other endemics that make everything more difficult.

Added to the complexity of the process is the government's new methodology. Starting next Tuesday,

the ministries of Economic Affairs and Social Security will

discuss -before and after the meetings with social agents- with

the changes proposed by the Government on the new labor framework. The tripartite dialogue has become quadripartite and makes companies and unions fear the delay of the process. The more negotiators, the greater the number of demands, the exchange of concessions and red lines.

The starting point is the labor reform promoted by

in February 2012 over a previous one by

in 2010. Its repeal is a mantra that CCOO and UGT repeat, supported by the promise of the PSOE that same year to overthrow it in as soon as they reached the Government. The Labor Force Survey on which the then Minister of Employment,

to promote it, reflected an unemployment of 5,273,600 people that had increased by 295,300 in just three months to bring the rate

. One in every two young people under 25 years of age could not work and the temporary employment rate was 25%, similar to the current one.

Almost a decade later, it is being discussed to repeal it in full recovery from a second crisis that, thanks to the ERTE, has contained unemployment at

However, Spain remains at the forefront of Europe as an example of an ineffective labor market.

Last Wednesday, none of those attending the meeting with Secretary of State

But these negotiations are like this: there are no red lines until they appear.

that unifies the Government's proposal. Although so far the discussion between Calviño and Vice President Díaz may seem semantic, the shock of recent weeks makes it clear that it is not. If Díaz applies the

of the United We Can program in 2019, he has a clear red line. He cannot admit that the modernization that Calviño defends leaves in place some labor reforms that were "written at the dictation of the troika and with the approval of the CEOE and the Círculo de Empresarios".

The person in charge of Economic Affairs, for her part, must ensure that the return of higher union participation quotas in the working conditions of the companies does not reduce flexibility to the market.

Changes rather than derogations.

That is why his proposal aims to concentrate the negotiation on a new Workers' Statute.

Among the novelties of the draft that

want to save after the arrival of Calviño, highlights the recovery of the preponderant role of sectoral agreements over company agreements.

With the new text, the sectoral agreements would set a salary floor that companies could not exceed.

Also the ultra-activity of expired agreements - maximum period of validity in case of disagreement - was limited to one year.

For unions, reversing all these conditions is essential if they want to regain a relevant role at the social level.

Right now, for example, the UGT admits that it lacks the strength to negotiate wage increases and that is why they are turning to achieve an increasingly higher SMI through a government decree.

precariousness of thousands of workers

The translation to the text is to introduce a series of limitations that make this practice more expensive and subject to controls.

For businesses, however, this is a very sensitive issue.

It affects the construction sectors, which even has its own sectoral law on subcontracting, metal, cleaning, dependency, security, gardening ...

The limits to this mode of organization are seen in companies as the bad practices of a minority become a threat to the business structure of the rest.

For the small and medium-sized companies that make up

99% of the business fabric

, this is a matter in which the

proposed by the Government

is not worth it

"The employment contract is presumed to be concluded for an indefinite time."

The Spanish labor market has become a case to study in developed economies due to its excess of temporary employment.

The abuse is so widespread that the Public Administration is, by far, the one that most resorts to a type of contracting that the European Commission encourages to cut back.

30% of public employees, around one million, are subject to these contracts.

Now, in the last proposal, the Government put on the table

of temporary hires in relation to the total workforce, something that the president of CEOE,

He came to speak of a "Marxist" labor reform project, a qualifier that is not difficult to link to Yolanda Díaz, a member of the PCE.

The companies defend that the temporality, by itself, responds to the nature of many businesses and that making a clean sweep as the draft intends would mean solving a problem politically by transferring it to the companies and also to the workers.

. It is an extension of what Yolanda Díaz boasts as one of her greatest successes, which has been the deployment of the ERTEs. One of the most annoying ministries with deciding its exclusive model has been Social Security and its minister, José Luis Escrivá, who is the one who has designed the exoneration tables in the contributions that companies pay for workers. The tool aims to give employers an alternative to dismissal, the costs of which were lowered by the 2012 reform. It is not one of the areas that can generate the greatest tensions except for the aspect of its financing. The reform of Rajoy supposed a reduction in the

that are not now in question.

EconomyThe stoppage of the Spanish industry due to the price of electricity already affects 20,000 jobs