The UAE and China adopt an expanded program of economic partnership

The Government of the United Arab Emirates and the Government of the People's Republic of China have agreed on new courses of action and an expanded economic cooperation program that includes promoting trade and investment growth, cooperation in the field of renewable energy and logistics, tourism development, support for entrepreneurship, and international cooperation. 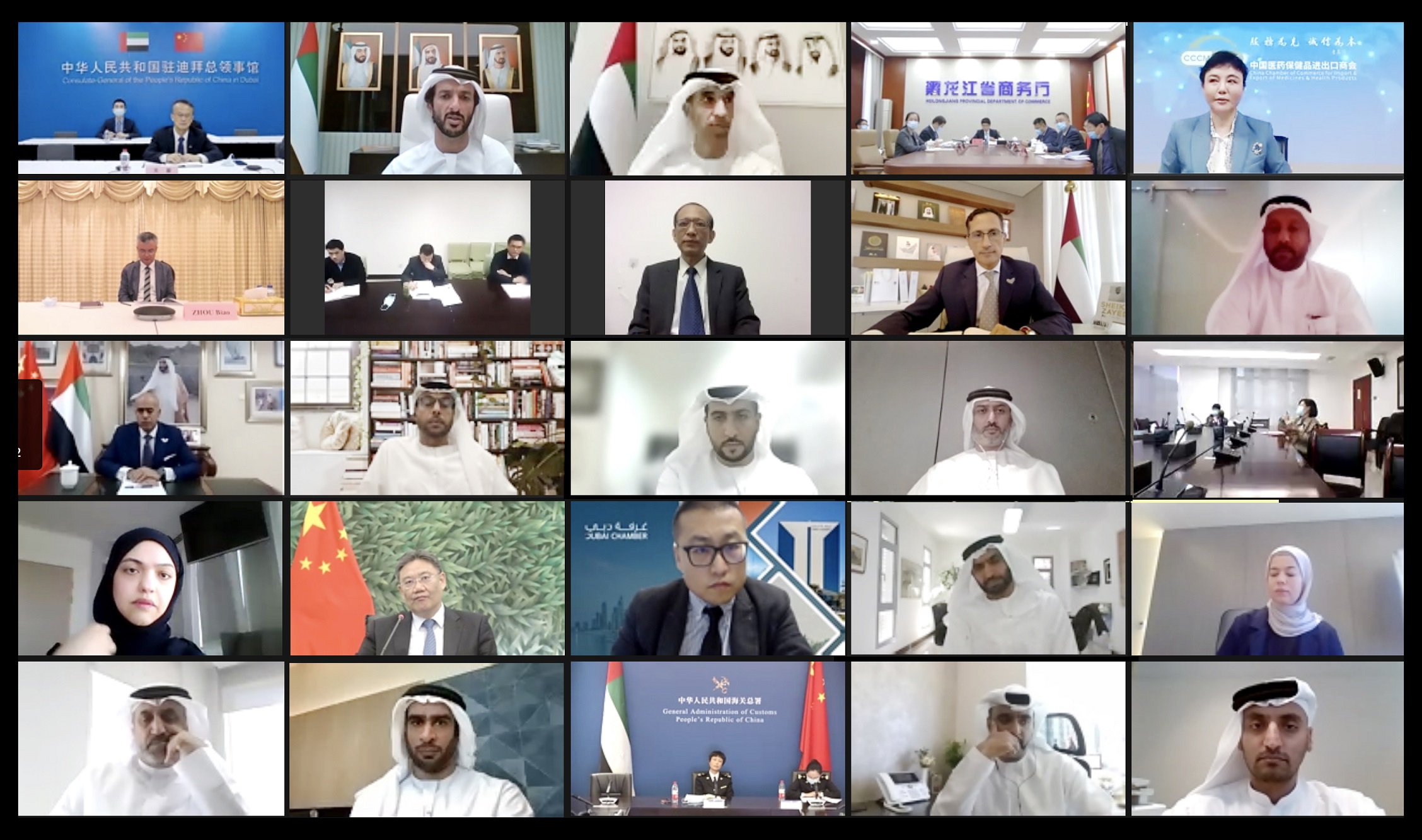 The UAE and China adopt an expanded program of economic partnership

The Government of the United Arab Emirates and the Government of the People's Republic of China have agreed on new courses of action and an expanded economic cooperation program that includes promoting trade and investment growth, cooperation in the field of renewable energy and logistics, tourism development, support for entrepreneurship, customs cooperation, food security and aviation.

The two sides focused on developing practical steps to stimulate investment cooperation between the two countries in the fields of "digital economy" and "green economy" during the next stage.

This came during the meeting of the seventh session of the Joint Economic Committee between the two countries, which was held on the sidelines of Expo 2020 Dubai, which was chaired by His Excellency Abdullah bin Touq Al Marri, Minister of Economy, representing the UAE government, and His Excellency Wang Wentao, Minister of Commerce of the People’s Republic of China, representing his country’s government. In the presence of HE Dr. Thani bin Ahmed Al Zeyoudi, Minister of State for Foreign Trade, HE Ali Obaid Ali Al Dhaheri, UAE Ambassador to the People's Republic of China, HE Ni Jian, Ambassador of the People's Republic of China to the UAE, as well as a number of government officials, representatives of the private sector and investment companies from both countries.

Abdullah bin Touq Al Marri stressed the strength and depth of the UAE-Chinese relations, which represent a model to be emulated at the international level, in light of the strong strategic relations that bind the two countries over 37 years, characterized by common will and hard work to achieve the comprehensive strategic partnership that the two countries have reached today, noting that the relations The two countries are characterized by broad development potentials and positive prospects, and are based on solid foundations of mutual respect and common interests in various economic, commercial and investment fields.

He stressed the importance of the committee as a platform for developing a road map for cooperation between the two countries during the next phase with a clear vision and in accordance with an integrated program of partnership, especially in the sectors of digital economy, digital trade, agriculture, science and technology, green economy, energy and renewable energy, as they are common engines for future development in the two countries.

Abdullah bin Touq reviewed the most prominent developments and achievements in the UAE economy during the past stage, and briefed the Chinese side on the pioneering initiatives and projects recently launched by the state in the framework of its future vision, especially the fifty projects and efforts to shift towards a new, more sustainable and flexible economic model through liberalizing investment and opening foreign ownership of companies. 100% and making comprehensive developments in the economic legislation system to facilitate doing business and enhance the country's attractiveness to pioneering projects, distinguished international companies, talents and innovations.

For his part, Wang Wentao, Minister of Commerce of the People's Republic of China, said: "The UAE-Chinese relations are a global example in all fields, and we are keen to develop them at all levels. We are working through the Joint Economic Committee to enhance communication and coordination and come up with clear paths of cooperation during The next stage is in areas of common interest, especially vital and future areas.”

For his part, His Excellency Dr. Thani Al Zeyoudi pointed out that the UAE and China have well-established strategic relations that cover various fields, especially the trade and investment fields. The UAE government is keen to support and strengthen partnerships between the Emirati and Chinese business communities and provide all facilities and incentives to Chinese companies wishing to establish or expand their businesses In the UAE or starting from it towards other regional and global markets, expressing his aspiration to increase cooperation with the Chinese government during the next stage to facilitate the task of Emirati companies exporting to China or investing in its various sectors.

Al Zeyoudi stressed the continuation of the process of cooperation with partners in China to achieve more connectivity between entrepreneurs in the two countries and enhance their access to promising opportunities in their markets. The UAE is also the first transit gateway for Chinese trade for two-thirds of the world's population, as about 60% of its trade is re-exported through the country's ports to more than 400 cities in the Middle East and North Africa.

He renewed the call for partners in China to join the Global Logistics Passport initiative launched by the UAE and to benefit from the facilities and incentives in logistical procedures that support trade and investment, which will enhance its partnership with the UAE market, and its access to regional and global markets.

His Excellency called on Chinese companies to benefit from the outputs of the committee held on the sidelines of Expo 2020 Dubai, and to explore the promising opportunities emanating from it as a new and integrated framework for trade cooperation with partners, and will contribute to strengthening the existing partnership with China and generating new opportunities for trade and investment between the two countries.

In addition, the two sides stressed the importance of completing the achievements of economic, commercial and technical cooperation that were previously achieved between the governments of the two countries within the framework of the joint economic committee, with the aim of creating new, wide and diversified opportunities for the business communities and enhancing the available capabilities to raise the rates of trade exchange and the flow of investments between the two countries.

The two sides agreed to create a mechanism to support cooperation in the field of e-commerce, continue to enhance trade facilities between the two countries, exchange experiences between the specialized economic zones in the two countries, increase investments and trade among them, continue facilitating trade, build successful investment companies, remove barriers they face, and build a friendly tax environment.

They stressed the importance of accelerating negotiations to establish a free trade area between China and the Gulf Cooperation Council, to promote trade growth and economic integration, and agreed to intensify joint efforts to achieve this goal and support the multilateral trading system to enable it to play a greater role in economic governance, and to further strengthen multilateral cooperation, Encouraging economic and commercial institutions, including chambers of commerce and industry, to communicate constructively and expand the volume of trade and investment exchange.

The two sides stressed the importance of completing the ongoing discussions to sign two memoranda of understanding between the two countries during the next phase to launch a new path for joint and mutual investments between the UAE and China in the fields of "digital economy" and "green economy", which will strongly enhance bilateral investment cooperation in the areas discussed.

The two parties agreed to form joint working groups to facilitate the access of companies, entrepreneurs and investors to the markets of the two countries and encourage them to establish successful companies, by holding joint meetings and workshops in the presence of investors and investment companies from both sides to discuss investment opportunities and important sectors and the advantages and incentives provided by the economic environment in both countries.

The two sides agreed on an action plan to enhance cooperation between companies and research academies in the field of software, computing, big data, smart cities and the digital economy, to create a joint competitive environment based on knowledge, technology and innovation. And continue to encourage and support companies to invest in the region and make it a model project for the two countries to jointly build the Belt and Road.

They also approved an action plan to enhance cooperation between the UAE and Chinese private sector, through exchanging visits of delegations and exchanging information on the needs of the two countries' local markets for goods and services, and promoting the healthy development of bilateral trade, as well as strengthening cooperation regarding quarantine of UAE agricultural exports to China, especially meat and fish. and dairy products.

The two sides stressed the need to focus on achieving the goals of climate neutrality, which are consistent with the zero-emission strategy of the UAE 2050, and to work to intensify investment cooperation in this regard, and to transform challenges in this sector into opportunities that guarantee a bright future for future generations.

The two sides agreed on an action plan to deepen bilateral cooperation in the field of energy and renewable energy to keep pace with changes in the global energy scene and discuss opportunities to increase the volume of mutual investments and exchange experiences in the renewable energy sector.

They also agreed on practical steps to expand comprehensive cooperation in the fields of energy and renewable energy and preparing new joint studies in the fields of hydroelectric power generation from dams.. They also discussed ways to enhance cooperation between solar energy institutions, research institutes and investment institutions in the field of solar energy, in a way that contributes to the development of the sustainable energy industry. and green.

The two sides agreed to continue to enhance cooperation in the field of infrastructure, transport and logistics, and to take advantage of the activities of Expo 2020 Dubai as an opportunity to strengthen the partnership relationship in the fields of infrastructure, energy, oil and gas, land and maritime transport and to benefit from the experience of the two countries in developing infrastructure, in addition to enhancing cooperation and exchanging technology and expertise. In the field of intelligent aviation to support development and innovation in the aviation industry.

The two sides also approved an action plan to support and encourage tourism exchange between the two countries, enhance cooperation between tourism institutions in the public and private sectors, and exchange knowledge in specialized tourism fields, including business tourism, sustainable tourism, cultural tourism, gastronomy tourism, hospital and recreation tourism, and excursion tourism. In addition to developing technical cooperation in the fields of tourism education and vocational training, as well as strengthening cooperation in the field of health care and life sciences.