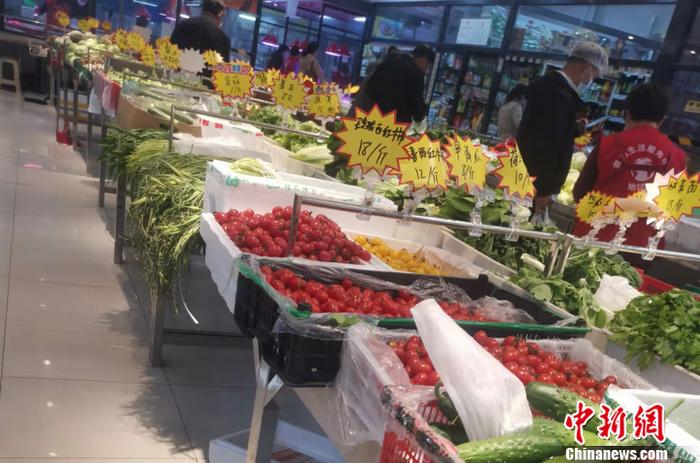 If you go to the supermarket to buy vegetables recently, you will find that the prices of many vegetables have soared. “Once pork was expensive and you were vegetarian every day, now you buy pork casually, but the price of vegetables is going up.” Some residents said.

The price of a variety of vegetables in supermarkets rises

"Before it was raining a lot and the vegetables could not get in, which caused the prices of many vegetables to rise." The vegetable vendor explained, "Although the price of vegetables has risen, you have to eat it. This kind of baby spinach can sell two big packs a day. "

Vegetable prices at a vegetable market in Xicheng District, Beijing.

"Now the price of vegetables is indeed higher than before, mainly because they are more expensive when they are purchased." Supermarket staff said.

Vegetable prices in a supermarket in Xicheng District, Beijing.

The price increase of vegetables is not limited to the Beijing area.

“I recently bought lentils for seven or eight yuan per catty, spinach for six or seven yuan per catty. Originally, lentils only sold for three or four yuan, while spinach sold for two or three yuan.” Ms. Liu, who lives in Jiaozhou, Shandong, exclaimed, “Vegetables are now more expensive than pork. NS."

The Ministry of Agriculture and Rural Affairs "National Agricultural Products Wholesale Market Price Information System" monitors that from October 15 to October 22, the wholesale price of pork was 19.73 yuan per kilogram.

From a national perspective, from October 15 to October 22, the average price of 19 kinds of vegetables in the wholesale markets of 286 production and sales areas across the country was 4.87 yuan/kg, an increase of 11.6% from last week and a year-on-year increase of 27.4%.

Why are vegetable prices soaring?

"This round of vegetable price increases is mainly due to the floods, and the relationship between market supply and demand has changed." Chen Mingjun, executive vice president of the China Vegetable Circulation Association, told a reporter from Chinanews.com.

"Since August, Henan, Shandong, Hebei, Shanxi and other places have suffered heavy rain disasters of varying degrees. Among them, Shandong, Henan, and Hebei are the main vegetable production areas in China, which have a greater impact on the supply of vegetables on the market." Chen Mingjun said. , Under the long-term flood disaster, it will also have a certain impact on the vegetables in the growing period, and then affect the follow-up supply.

The price of some storage-resistant vegetables in a vegetable market in Xicheng District, Beijing.

When will vegetable prices come down?

In Chen Mingjun's view, it depends on when new varieties and new crops are on the market.

"Most vegetables are not tolerant to storage and need to be supplied according to different climatic conditions. When new supplies come up, the prices will return to normal prices." Chen Mingjun said.

"Autumn vegetable supply is currently in a phased tight state. Winter vegetables are generally on the market around mid-November. The tight vegetable supply may be relieved at that time." Liu Tong said.

But Liu Tong also predicts that the decline in overall vegetable prices will not be too obvious.

"Winter vegetables also have a high-opening phenomenon when they are on the market. If the growth period is relatively small, the price will open higher and lower, but it will remain at a high level in a short period of time." (End)