Ahmed bin Saeed: We are very satisfied... Our goal is to restore Emirates Airlines' entire network of airlines

His Highness Sheikh Ahmed bin Saeed Al Maktoum, Supreme Chairman and CEO of Emirates Airlines, and the group, said that the immediate goal of “Emirates Airlines” is to restore its entire network of airlines to levels before the “Covid-19” pandemic. «Emirates Today», on the occasion of the 36th anniversary 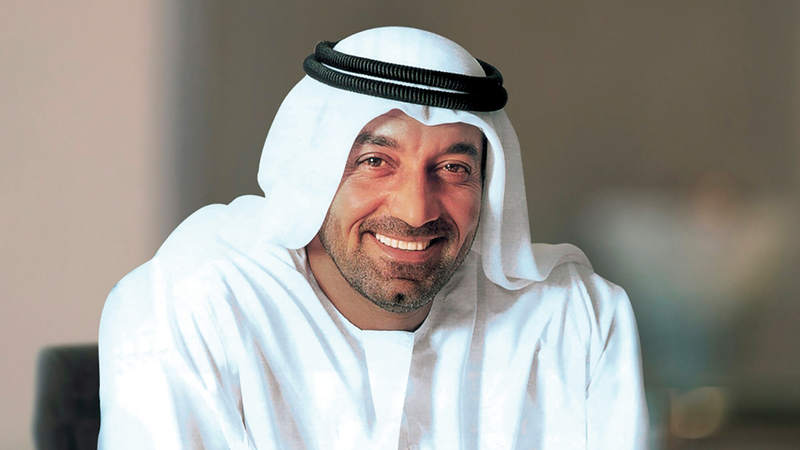 He emphasized that Dubai is a global business center..and it was necessary to remain open to international flows of goods and people

Ahmed bin Saeed: We are very satisfied... Our goal is to restore Emirates Airlines' entire network of airlines

His Highness added in an interview with "Emirates Today", on the occasion of the 36th anniversary of operating the first Emirates flight: "We are very satisfied, and we look forward to more, as we have resumed our operations to more than 120 cities on six continents, that is, more than 90 % of the destinations of our pre-pandemic network, and we operate the entire Boeing 777 fleet, which consists of 151 aircraft, and we continue to deploy more of our Airbus A380 aircraft.”

His Highness referred to the return of the pilots who chose to take unpaid leave, to service, and the launch of a global campaign to hire air and ground hosts.

His Highness made it clear that any country has the right to implement what it deems appropriate, but with the progress of vaccination campaigns and adherence to precautionary measures, he does not see a reason for some countries to be strict in closing their borders, or to exaggerate the tightening of entry procedures, indicating that it was necessary for Dubai to remain It is open to international flows of goods and people, as a global business center for trade, travel and tourism.

In detail, His Highness Sheikh Ahmed bin Saeed Al Maktoum, Supreme Chairman and CEO of Emirates Airlines, and the group, said that "(Emirates Airlines) was established and started its operations and expanded rapidly, in conjunction with Dubai's giant plans on the journey of progress and excellence, and strengthened its position in the global industry. With its association with Dubai as a main base for its launch, their growth went hand in hand.”

His Highness added that Dubai and its airport expansion plans formed a platform from which Emirates Airlines launched to the world, while the airline provided Dubai with global fame and resonance that caught the eye, and contributed to the flow of companies, investors and tourists to it.

His Highness stated that the continuous plans to expand the fleet and the network, without being affected by any crises or obstacles, constituted prominent stations on the path of the world, pointing out that the Gulf War in 1990 was the first serious test for Emirates Airlines, but it came out stronger and more famous. It was the region's only link with the world, even during the intensification of hostilities, and after that it ordered its first Boeing 777 aircraft.

His Highness continued: "Following the events of September 2011, (Emirates Airlines) restored confidence in the aviation community, with the largest order in the history of the industry, as it was behind the production of the (A380) aircraft, and submitted the first order to purchase a number of them."

His Highness pointed out that the expansions of "Emirates Airlines" required the construction of a special "concourse" for it, so the inauguration of Building No. 3 was an important station in the airline's journey, followed by a special "Concourse" for the "A380", and then the Sheikh Rashid Building "Concourse C", in parallel with the acceleration of Its expansion across six continents in the first decade of the 21st century.

His Highness said: "We witnessed many stations, until (Emirates Airlines) became the largest international carrier in the world."

Regarding the strategic features that the carrier followed to deal with the situation related to the “Covid 19” pandemic, His Highness said that “Emirates Airlines” has played a pivotal role in Dubai’s strategy to deal with the pandemic and its effects since the first day, indicating that with the cessation of air traffic, there was a need to operate flights. The evacuation of large numbers of stranded people, whether within the country, or to their countries, at a time when the carrier took the initiative to implement protocols and precautionary measures to protect its customers and employees.

His Highness added: “With the start of some countries opening their borders to international travelers, we have started operating flights, in full compliance with all the requirements and conditions set by those countries.

Dubai also became one of the first cities to open its doors to travelers from all over the world, at a time when we set our sights on resuming operation to any destination that opens its borders to movement, restoring our pre-pandemic network, and continuing expansion and spread.

Regarding the work plans developed by the carrier during the pandemic, His Highness Sheikh Ahmed bin Saeed Al Maktoum said: “We are very satisfied, and we are looking forward to more, as we have resumed our operations to more than 120 cities on six continents, i.e. more than 90% of the destinations of our network. Before the pandemic, we are operating the entire Boeing 777 fleet, which consists of 151 aircraft, and we continue to deploy more of our Airbus A380 aircraft, with the increase in seat coverage and the growth in travel demand.”

His Highness stressed that Emirates Airlines has led the industry in its efforts to get rid of the stress of travel, and has implemented the latest health and safety measures at every step of the flight to protect the health of customers and ensure their sense of safety and confidence when making the travel decision.

It also introduced contactless technology to facilitate the passage of customers through Dubai International Airport, and enhanced digital verification capabilities, to provide customers with more opportunities to benefit from the IATA passport.

His Highness continued: “We have maintained our leadership by developing many innovative products and services to meet the requirements of travelers in unusual and changing circumstances, as we have strengthened our initiatives in the field of customer care, through more generous and flexible reservation policies, and extended insurance coverage against various risks, in addition to extending retention periods. with miles and tier status in the (Emirates Skywards) programme.

His Highness Sheikh Ahmed bin Saeed Al Maktoum said: “As a global business hub for trade, travel and tourism, it was essential that Dubai remain open to international flows of goods and people. We were able to achieve this much earlier than most other countries, thanks to the wise vision of our leadership, as our country completed one of the most successful vaccination campaigns in the world. This has contributed to creating high levels of global confidence in Dubai, attracting visitors, major commercial events, as well as business and investments.” His Highness stressed that Emirates Airlines has a developed and integrated infrastructure at its center in Dubai. His Highness said:“We have a long history of dealing with various crises, natural disasters and epidemics that have affected the world in the past years, which gave us flexibility and the ability to take thoughtful decisions and initiatives, which brought about transformations in the aviation industry’s handling of the pandemic, in addition to our human cadres, who continued to work tirelessly, They made, and are still working, with their utmost efforts and energies to continue down the path of recovery, to pre-pandemic levels, and then return to growth and expansion. They are an honor and a place for me.”

His Highness Sheikh Ahmed bin Saeed Al Maktoum said that Emirates Airlines' plans are to continue placing investments to develop its products and services, and to expand its fleet and global network.

His Highness added: “Our immediate goal is to restore our entire network to pre-pandemic levels, whether in terms of the number of stations or the number of flights to each city, and we are fully prepared for that, as we have returned to service our pilots who chose last year to take an unpaid leave. We have also launched a global campaign to hire air and ground hosts to maintain the standards of our services and keep pace with the growth of travel to, from and through Dubai.”

• "(Emirates Airlines) played a pivotal role in Dubai's strategy to deal with (Covid-19)".

• “We have resumed our operations to more than 120 cities, and operate the entire fleet of (Boeing 777) aircraft.”

His Highness Sheikh Ahmed bin Saeed Al Maktoum, Supreme Chairman and CEO of Emirates Airlines, and the group, said that people across the world cannot do without travel, as they are eager to re-enjoy holidays, family visits and commercial activities, pointing to His Highness receiving “Emirates Airlines” There is a high demand for travel, whenever operations resume to a specific destination.

His Highness continued: "People are ready to adapt and meet the conditions and restrictions and abide by protocols, and it is the right of any country in the world to implement what it deems appropriate, but with the progress of vaccination campaigns and adherence to precautionary and preventive measures, I do not see a reason for some countries to be stringent in closing their borders, or to exaggerate their tightening." Entry procedures.

His Highness Sheikh Ahmed bin Saeed Al Maktoum, Supreme Chairman and CEO of Emirates Airlines, and the group, said that “Emirates Airlines” has harnessed its energies and fleet of cargo and passenger aircraft, to help maintain the stock of food supplies in the Emirates, and compensate for consumption during the pandemic. «Covid-19», His Highness pointed out that the regular flights for shipments from the main production markets, contributed to the continuation of the transportation of products and foodstuffs to various consumer markets.

His Highness said: "(Emirates Airlines) has thus contributed to the local economies of many of the countries it serves, by transporting exports of agricultural and other products, and since the outbreak of the pandemic, (Emirates Air Cargo) has led the global industry in transporting (Covid-19) vaccines and other other things. Essential pharmaceuticals, personal protective equipment and food.

To date, we have transported, through our center dedicated to medicines and vaccines in Dubai, more than 1,800 tons of (Covid-19) vaccines, equivalent to 400 million doses, to more than 80 destinations across the six continents of the world.

His Highness continued: "We have also launched, in cooperation with (Dubai Ports World), Dubai Airports Corporation, and the International City for Humanitarian Services, a global logistical initiative to transport and distribute vaccines through Dubai.

And we signed a memorandum of understanding with (UNICEF) to prioritize the transfer of (Covid-19) vaccines, in support of the Facility of the (Cofax) Global Initiative, which aims for a fair global distribution of vaccines.

His Highness stressed that Dubai's strategy has succeeded in dealing well with the pandemic, and getting out of its effects, saying: "We are in a much better position compared to last year, and this achievement was achieved thanks to proper planning and proactive policies that helped contain the epidemic, and mitigate its repercussions on various sectors. ».