At the end of last week, gold prices achieved decreases of between 1.75 and 2.25 dirhams per gram of various carats, compared to their prices at the end of the previous week, according to the price indices announced in the Dubai and Sharjah markets. The price of a gram of 24-carat gold reached 215.5 d 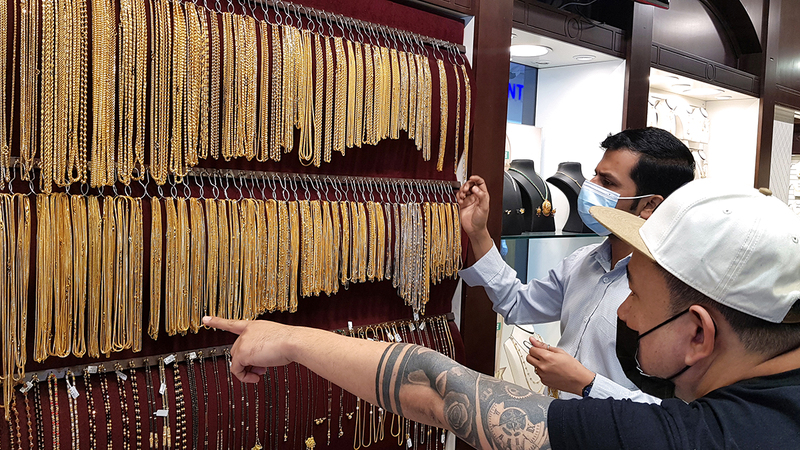 Gold prices recorded decreases, ranging between 1.75 and 2.25 dirhams per gram.

At the end of last week, gold prices achieved decreases of between 1.75 and 2.25 dirhams per gram of various carats, compared to their prices at the end of the previous week, according to the price indicators announced in the Dubai and Sharjah markets.

Officials of outlets for the gold and jewelry trade told «Emirates Today», that the markets witnessed a demand for sales of gold works, supported by the decline in prices, and the weekend that included the Prophet’s Birthday holiday, which in turn activated the movement in the open markets, with the recent improvement in weather rates. .

The director of "Dahkan Jewelery Company", Jay Dehkan, said that the outlets in both open markets and commercial centers recorded a growth in the demand for buying new gold works and jewelry gifts.

She added that the Prophet's birthday holiday in public and private sector institutions allowed dealers to buy, especially with the recent price decline in gold.

He pointed out that the turnout included different nationalities of residents, in addition to visitors who focus on buying souvenirs, especially of 18-carat, which includes designs in greater proportions compared to other calibers.

For his part, sales manager at Diamond Jewelery, Dilip Soni, said that the current period is naturally witnessing positive turnout rates, supported by the popularity of tourism and wedding events during the coming period.

He added that the decline in the price of gold, and the holiday of the Prophet's birthday, had additional positive repercussions in the improvement of the demand for buying gold jewelry.

In the same context, the director of "Rikesh Jewelery Company", Rickish Dahnak, said that the markets have recently recorded an improvement in the demand for buying gold jewelry, supported by a price decline that is one of the motivating factors to activate dealers, as a psychological factor, to demand purchase, in addition to the weekend that It had positive repercussions.

Dahnn pointed out that the weather has begun to improve and its role in increasing the demand for open markets that include gold stores, pointing out that the largest percentage of activity is no longer limited only to outlets in commercial centers as in the past.