House prices have really fallen! New houses have fallen for the first time in 6 years. Can you buy a house now? 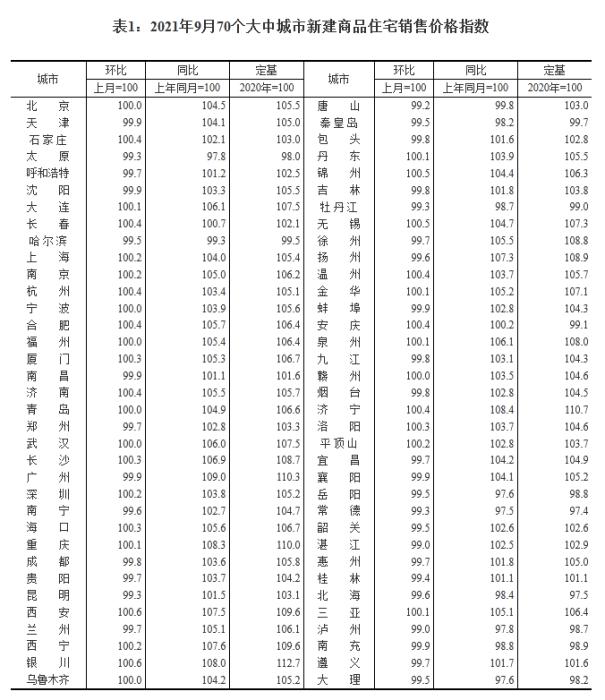 "September sales prices of commercial residential buildings were stable and declined." On October 20, the National Bureau of Statistics released data showing that in September 2021, the sales prices of commercial residential buildings in 70 large and medium-sized cities showed a slight downward trend from the previous month, and the year-on-year increase continued. Fall back.

In the first half of the year, the property market was still in full swing, but suddenly it entered the "quick freezing" with the drop in temperature.

What happened in the property market in a few months?

Will it fall again in the future?

"The most noteworthy thing is naturally that the new house price index has a negative month-on-month increase for the first time. Statistics show that this is also the first decline since May 2015. In other words, this is the first decline in 77 months." E-House Research Institute think tank Yan Yuejin, research director of the center, said.

In September 2021, the sales price index of newly-built commercial residential buildings in 70 large and medium-sized cities.

From the perspective of new houses, the sales price of newly-built commercial residential buildings in first-tier cities has changed from a 0.3% month-on-month increase to the same level.

Among them, the month-on-month increase in Beijing changed from 0.2% last month to flat; Guangzhou fell 0.1%, the same as last month; Shanghai and Shenzhen both rose 0.2%, and the increase was 0.2 and 0.8 percentage points lower than the previous month.

"Although Shanghai and Shenzhen have increased, but the two places are strictly implementing price restrictions, the trend of house price increases is completely controllable, and price increases will not be transmitted to surrounding cities." Lu Qilin, research director of 58 Anju Guest House Property Research Institute Express.

The sales price of newly-built commercial residential buildings in second-tier cities changed from a 0.2% increase in the previous month to the same level.

The sales price index of second-hand housing in 70 large and medium-sized cities in September 2021.

The cooling of second-hand housing is even more obvious.

The sales price of second-hand housing in first-tier cities turned from an increase of 0.2% last month to a decrease of 0.4%.

"This is very close to the actual feeling. The recent second-hand housing transactions in some cities have been cut in half, indicating that the market itself has entered an obvious cooling cycle." Yan Yuejin said.

Credit tightening is the biggest reason for "quick freezing"

"In the first half of the year, credit was relatively ample, but there were difficulties in lending in the third quarter, especially in hot real estate cities, including East China and South China. The queuing phenomenon of real estate loans was serious, which severely restricted the real estate transaction." Zhang Dawei, chief analyst of Centaline Real Estate, believes that real estate credit is collected. Tightness is the biggest reason for the rapid freezing of the market.

"In the first three quarters of this year, the amount of personal housing loans issued remained stable, basically matching the amount of commercial residential sales during the same period. In a few cities, housing prices rose too fast, personal housing loans were subject to some constraints, and the rate of increase in housing prices was suppressed. After housing prices stabilized, these The supply-demand relationship of urban housing loans will also return to normal." At the central bank’s press conference on financial statistics for the third quarter of 2021 held on the 15th, Zou Lan, Director of the Financial Markets Department of the Central Bank, emphasized "to maintain the stable and orderly distribution of real estate credit and safeguard the real estate market. "Stable and healthy development" is considered to be a sign that the real estate credit policy has bottomed out and the market has gone dark.

The industry expects that the banks will correct the tight real estate credit policy in the later period, accurately understand and implement the credit measures for the real estate enterprises that stepped on the line, especially for the red file enterprises will also give corresponding credit support.

"Although there have been some recent loosening of credit and other policies, there is a time lag to truly affect market fundamentals. Judging from the historical law of the cooling cycle, it often lasts for 8 months." Yan Yuejin believes that it can be considered at present. The real estate market has clearly entered a cooling cycle.

Lu Qilin also believes that the national new housing market is already in a state of falling both volume and price, and as the year closes, the phenomenon of developers reducing prices and asking for sales in order to complete the annual sales target will become more prominent. It is expected that the prices of new houses in various cities in the fourth quarter will Continue to fall.

"It is necessary to clearly recognize the contradiction in current housing prices, and be alert to the risk of housing prices turning from'overheating' to'overcooling'." Yan Yuejin said, paying close attention to various market transactions in the cooling cycle, paying attention to risk control, and guarding against all types of market transactions. Prices fall too fast or the market panic.

The "big ups" or "big downs" of the real estate market will also bring pressures and risks.

In the face of this wave of falling house prices, some cities have begun to stabilize their real estate market expectations and issued "restriction orders", including more than 15 cities including Zhangjiakou, Heze, Yueyang, Kunming, Shenyang, Jiangyin, Guilin, Zhuzhou, and Tangshan.

Have you considered buying a house recently?