Six highlights of China's economy in the third quarter 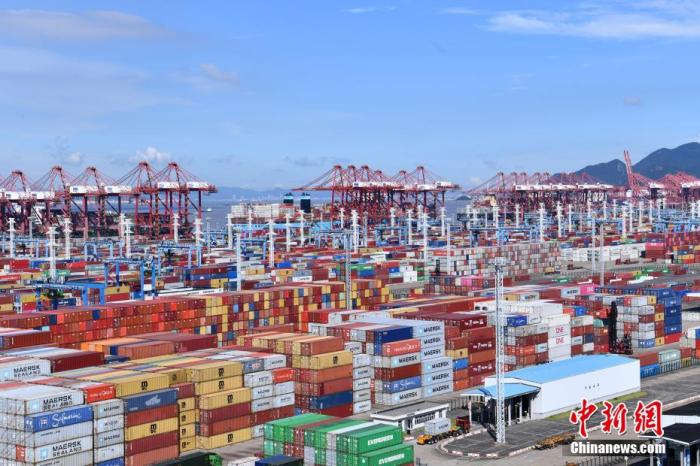 However, China's economy continues to grow, and the main macro indicators remain within a reasonable range, showing five bright spots.

Data released by the National Bureau of Statistics of China on the same day showed that in the third quarter, China's GDP grew by 9.8% year-on-year, which was higher than the expected target of more than 6%.

Among them, the third quarter increased by 4.9% year-on-year and 0.2% month-on-month.

Fu Linghui, spokesperson for the National Bureau of Statistics and Director of the Department of Comprehensive Statistics of the National Economy, said that due to the rising base in the same period last year and the impact of the epidemic, the year-on-year growth rate of China's economy in the first three quarters fell back compared with the first half of the year, but the quarter-on-quarter growth rate Continuing the momentum of expansion, the two-year average growth rate still maintained rapid growth.

The overall situation of employment has improved

Statistics show that in the first three quarters, the newly created jobs in China's cities and towns reached 10.45 million, and 95% of the annual target has been completed.

The surveyed unemployment rate in cities and towns across the country averaged 5.2%, which was lower than the expected target of 5.5% for the whole year.

Among them, the unemployment rate in September was 4.9%, a decrease of 0.2 percentage points from the previous month.

Analyzing the reasons, Fu Linghui pointed out that, overall, the continued economic recovery is conducive to increasing jobs.

In addition, the recovery and improvement of China's service industry is conducive to expanding employment capacity.

Consumption picks up and accelerates

Consumption that has been slow to recover due to the epidemic is picking up faster.

In the first three quarters, the national per capita consumption expenditure increased by 15.8% year-on-year in nominal terms, and the two-year average growth rate was 5.7%, which was faster than that in the first half of the year.

Among them, the year-on-year growth rate of total retail sales of consumer goods in September rose from 2.5% to 4.4%, and the two-year average growth rate rose from 1.5% to 3.8%.

Wang Jingwen, a senior macro researcher at China Minsheng Bank, said that since September, as the epidemic has gradually come under control, offline contact consumption has taken the lead to recover.

The year-on-year growth rate of catering revenue in September rebounded from -4.5% to 3.1%.

At the same time, online sales are still hot. From January to September, online retail sales of physical goods increased by 15.2% year-on-year.

Official data show that in the first three quarters, the contribution rate of final consumption expenditure to economic growth was 64.8%, which is still the number one driving force for economic growth.

Although parts of China suffered severe natural disasters in the third quarter, which had a certain impact on the production of crops, Fu Linghui said that from a national perspective, the climatic conditions for agricultural production are generally more suitable, and field management and disaster reduction measures are also effective. of.

This year, China's summer grain and early rice have achieved a double increase in output, with a total increase of 2.2%.

With increasing support for grain production, planting efficiency is also improving, and farmers' enthusiasm for growing grain has increased.

The sown area of ​​autumn grains has significantly expanded this year, among which corn, a high-yield crop, has increased significantly.

Overall, Fu Linghui said that autumn grains are expected to achieve a better harvest, which is conducive to a bumper harvest throughout the year.

Exports are better than expected

In the first three quarters, the total volume of imports and exports of goods increased by 22.7% year-on-year.

China continues to maintain its status as the largest country in trade in goods.

Wang Jingwen said that in September, China's exports in US dollars increased by 28.1% year-on-year, higher than previous values ​​and market expectations; the two-year compound growth rate also rebounded from 17.0% to 18.4%.

Despite the slowdown in global economic growth and the weakening of order transfer effects due to the recovery of production in emerging economies, export prices are expected to remain at a high level due to the difficulty of repairing the global supply chain in the short term, and export growth is expected to remain resilient.

The data shows that in the first three quarters, the national per capita disposable income of residents was RMB 26,265, an actual increase of 9.7% year-on-year after deducting price factors, and an average increase of 5.1% over the two years.

In the same period, China's GDP, calculated at comparable prices, increased by 9.8% year-on-year, with an average growth rate of 5.2% over the two years.

At the same time, the per capita income ratio of urban and rural residents has shrunk.

The ratio of per capita income of urban and rural residents was 2.62, a decrease of 0.05 compared with the same period last year.