"Lan Cang" EMU arrived in Vientiane, Laos, will be put into dynamic inspection of China-Laos Railway

China News Service, Beijing, October 16 (Reporter Zhou Yin) The reporter learned from China Railway International Co., Ltd. that at 11 o'clock on the 16th (10 o'clock in Laos time), a streamlined train of red, blue and white painted EMUs arrived. The newly completed Vientiane Station of the China-Laos Railway was officially delivered to the Laos-China Railway Company. The EMU was named "Lancang" 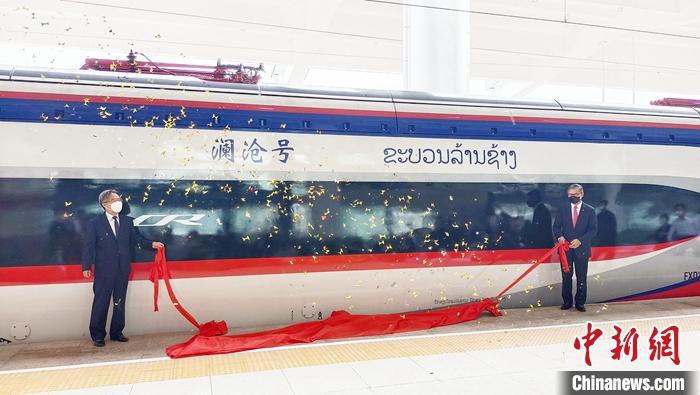 The EMU was named "Lancang" and will be put into dynamic testing of the China-Laos Railway in the near future.

According to the person in charge of China Railway International Co., Ltd., the EMU delivered this time was purchased by the Lao China Railway Company through bidding and was jointly manufactured by Qingdao Sifang Locomotive and Rolling Stock Co., Ltd. and Dalian Locomotive and Rolling Stock Co., Ltd., a subsidiary of CRRC Group. The EMU is a centralized EMU that can tow the trailer and can be operated and driven at both ends.

The name "Lancang" originated from the ancient kingdom of "Lancang" in Laos and the Lancang River that flows through China and Laos. It means the good neighbors, friends, comrades, and partnerships of the two countries.

The person in charge stated that the "Lan Cang" EMU car body has a streamlined appearance and is painted in the Lao national flag colors of "red, blue, and white", which is called "the beauty of the national flag".

The interior of the EMU adopts two themes of "Zhanba Tianxiang" and "Splendid Jiangshan".

The picture shows the scene of the delivery ceremony.

"Lancang" EMU has a maximum operating speed of 160 kilometers per hour and is composed of 9 cars, including 1 power car, 1 first-class car and dining car, 6 second-class cars, with a capacity of 720 people, and can achieve two train weights when needed. Joint operation.

The EMU compartment is spacious, the air-conditioning temperature can be adjusted freely, the seats are ergonomically designed, and each group of seats is equipped with standard power sockets in China and Laos, passengers are comfortable and easy to use; the dining car is equipped with a food display cabinet and a coffee machine , Microwave ovens and other equipment and dining and bar areas, which can meet the needs of passengers for food and leisure; passenger information display screens, broadcasts and service signs are all in Chinese, Laotian, and English; there is a barrier-free area in the No. 4 carriage. Facilities such as barrier seats and armrests, toilets for the disabled, SOS call buttons, and Braille guide signs are convenient for passengers with disabilities to travel.

The person in charge said that in order to ensure the smooth delivery of the "Lancang" EMU to Laos, the governments of China and Laos and China National Railway Group Co., Ltd. attach great importance to it. The Chinese Embassy in Laos and the Lao Ministry of Public Works and Transportation have given great efforts to customs clearance. The support has ensured that the EMU exits from Kunming through Mohan at the Chinese railway port, and enters and arrives safely at Boding, the Laos railway port.