The British-Iranian still stranded in Tehran has already served a 5-year prison sentence. This Saturday, October 16, she lost in appeal of a new conviction for having participated in a rally ... 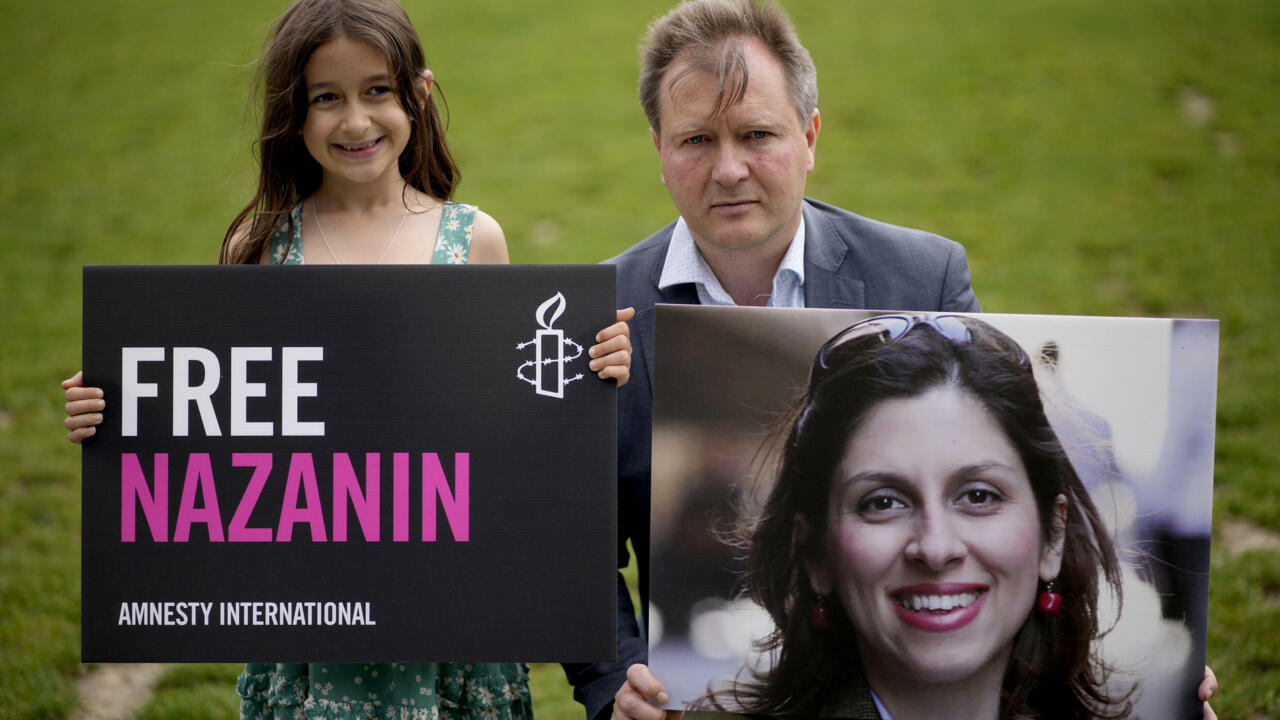 Richard Ratcliffe, husband of British-Iranian Nazanin Zaghari-Ratcliffe, and Gabriella, their seven-year-old daughter, in front of Parliament in London for 2,000 days in detention on September 23, 2021. AP - Matt Dunham

The British-Iranian still stranded in Tehran has already served a 5-year prison sentence.

This Saturday, October 16, she lost on appeal of a new conviction for having participated in a rally in front of the Iranian embassy in London.

Nazanin has lost his last appeal and his one-year sentence plus one-year travel ban stands without a court hearing.

She could now be returned to prison at any time,

”tweeted MP Tulip Siddiq, after speaking with Nazanin's husband, Richard Ratcliffe, who lives in his constituency of Hampstead and Kilburn in north London.

Nazanin has lost her latest appeal and her sentence of 1 year plus 1 year travel ban is upheld with no court hearing.

She could now be returned to prison at any time.

The PM must act now to #FreeNazanin

" to help Nazanin Zaghari-Ratcliffe in this affair which is exacerbating tensions between London and Tehran.

that his wife was waiting to be summoned and was "

traumatized by the idea of ​​having to return to prison

I don't think it will happen immediately but I think it's only a matter of time,

Above all, the husband of the British-Iranian denounces a "

The case of Nazanin is always a question of money," he

recalls at the microphone of

, of the International service of RFI.

The UK has an old debt dating back to an arms contract in the 1970s. Iran had bought weapons they never received and the UK never returned the money. .

This is the main reason why Nazanin is currently being detained

His Iranian lawyer Hojat Kermani told AFP that he would ask for the sentences to be mixed.

Free without being able to leave the country

Project manager for the Thomson Reuters Foundation, the philanthropic arm of the news agency of the same name, Nazanin Zaghari-Ratcliffe was arrested in 2016 in Tehran, where she came to visit her family.

She had been accused of conspiring to overthrow the Islamic Republic, which she fiercely denies, and sentenced to five years in prison.

After serving her sentence, she was sentenced again at the end of April to one year in prison and a one-year ban on leaving Iran for participating in a rally outside the Iranian embassy in London in 2009.

According to his lawyer, Nazanin Zaghari-Ratcliffe was authorized in March 2020, because of the Covid-19, to leave prison with an electronic bracelet but under house arrest.

Since completing her sentence, she has been free but still cannot leave the country.

More generally, the negotiations between the West and Iran on the nuclear deal and the lifting of US sanctions are the context in which we all find ourselves trapped,”

Our case is just one of many.

There are also French people, Fariba Adelkha and Benjamin Brière.

that the international community must work in unity, particularly within the nuclear negotiations to put an end to this practice of hostage diplomacy in which people are used as negotiation levers.

It is a dangerous practice which requires a coordinated response between the governments of Europe and across the Atlantic.