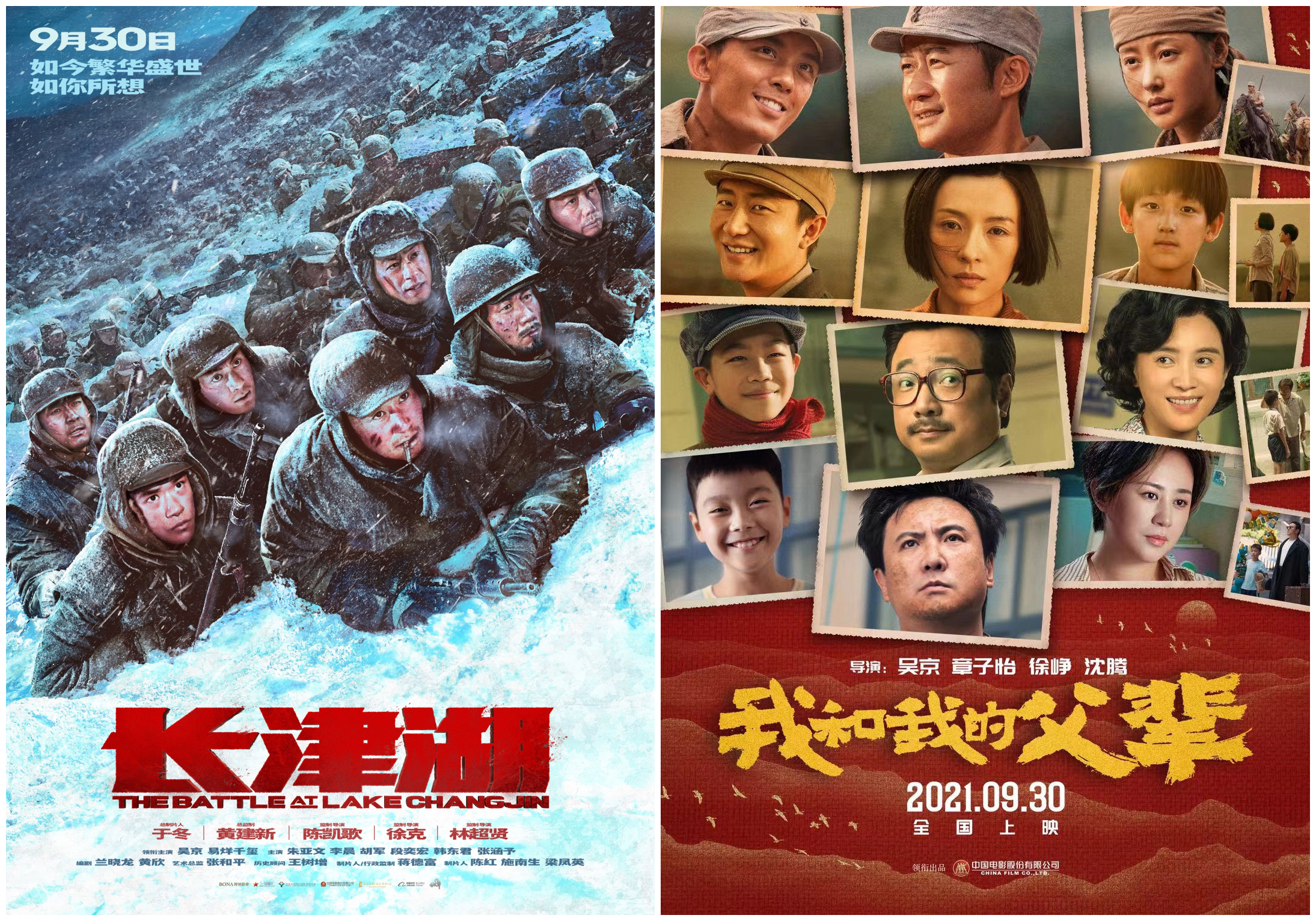 National Day files in the Year of the Ox, "Changjin Lake", "My Fathers and Me", "Pipiru and Luxisi: The Canned Man", "Big Ear Tutu's Tyrannosaurus Rex in Action", "Five Young Boys" and "Eagle" "Catch the Chicken", "Save the Donuts: Time and Space Rescue", "Explore the Cat Mermaid Princess" 8 films are released together, covering war, plot, comedy, animation and other themes.

"Changjin Lake" "My Father and Me" movie poster

According to the data of the Beacon Professional Edition, from 2018 to 2020, the box office of the National Day movies in Mainland China will be 1.908 billion, 4.466 billion, and 3.967 billion respectively.

It is worth noting that in the first 6 days of the National Day file (October 1st-October 6th), for the first time, the box office of a single day exceeded 600 million for 6 consecutive days.

In an interview with China-Singapore Jingwei reporters, Fu Yalong, deputy general manager of the Yen Solution Center, pointed out that from the perspective of the movie market, the box office of the National Day stalls this year has basically recovered to the level before the epidemic.

And for six consecutive days, the single-day box office has remained above 600 million yuan, setting a record.

According to the monitoring data of Yien, from the perspective of the audience's mood of watching movies, this year's National Day file satisfaction is 89.1 points, which is the highest score in the same period in history and the highest satisfaction in the historical survey period (China Film Art Research Center and Yien Data Research).

No matter from the box office or the atmosphere, it has proved the fundamental and robustness of the Chinese film market.

Fu Yalong also said that the Matthew effect of this year's National Day files is too significant, and the lack of mid-waist films is more pronounced. The main constraint on my country's film market is the content level. The upstream of the film industry and the supply of content creation must be resolved with great efforts.

Another point is that the number of people watching movies on the National Day this year is lower than last year, and worse than 2019 before the epidemic. Although there are factors affecting the length of "Changjin Lake", it also shows to a certain extent that the number of people watching movies has increased and the appropriate ticket prices. Regulation is also an issue that should be paid attention to in the future. In particular, the cultivation and guidance of consumption habits such as the size of the audience and the frequency of watching movies is the most important support point of the film market.

"Changjin Lake" became a hit for National Day this year, and a single film contributed over 70% of the box office for the National Day.

In addition to box office sales, "Changjin Lake" has a score of 9.5 in both the Lighthouse Pro app and Maoyan Pro app.

Yu Dong, chairman of Bona Pictures Group and the chief producer of "Changjin Lake", told reporters from Sino-Singapore Jingwei that "Changjin Lake" has been recognized by audiences and the market, and it is inseparable from the rapid development of China's film industry. , The sincere cooperation of all parties in the industry is also derived from the strong appeal of the spirit of "Resisting U.S. Aid Korea".

Yu Dong believes that with the joint promotion of policies, markets, and creators, more high-quality thematic works will appear in the Chinese film market. In the post-epidemic era of the world film market, more excellent Chinese films will also be exported to the world. market.

In Fu Yalong’s view, from the perspective of the film itself, "Changjin Lake" has a high degree of completion of cast, narrative, and production, and its story theme and theme label are very suitable for the National Day file. The film's story background and emotional expression are also posted. Meet the needs of the current audience.

In addition, the pre-announcement strategy and rhythm have also successfully paved the way for the audience's viewing transformation.