Ministry of Commerce: It is estimated that the total social zero for the whole year is expected to reach 44 trillion yuan

China News Service, September 26. Wang Bin, deputy director of the Consumer Promotion Department of the Ministry of Commerce, said on the 26th that the total annual social zero is expected to reach 44 trillion yuan, an increase of about 12.5% ​​over 2020 and an increase of about 8% over 2019. . Data map: Citizens buy goods in supermarkets. Photo by China News Agency reporter Han Zhangyun   The 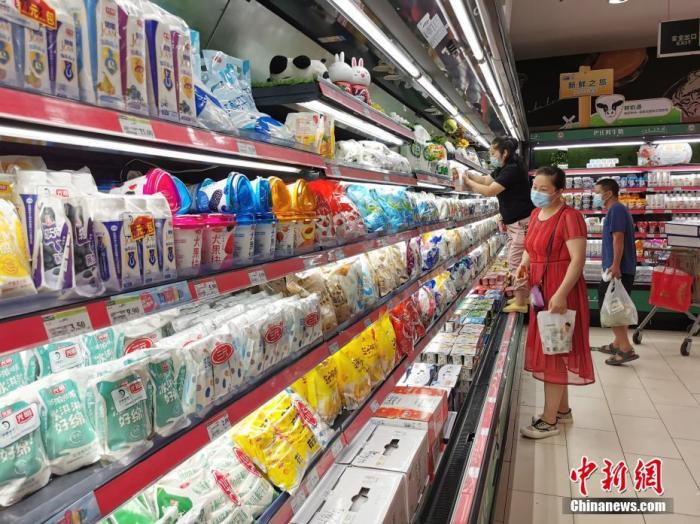 China News Service, September 26. Wang Bin, deputy director of the Consumer Promotion Department of the Ministry of Commerce, said on the 26th that the total annual social zero is expected to reach 44 trillion yuan, an increase of about 12.5% ​​over 2020 and an increase of about 8% over 2019. .

The Ministry of Commerce held a press conference on the 26th.

At the meeting, a reporter asked: What is the reason for the decline in the growth rate of total social zero in August?

What is the prediction for the next stage of the consumer market development trend?

Will some specific measures to promote consumption be taken?

Wang Bin responded that in the first eight months of this year, the total amount of social zero increased by 18.1% year-on-year and 8% over the same period in 2019. The overall consumer market showed a positive recovery trend.

In August, the total amount of retail sales increased by 2.5% year-on-year, and the growth rate has slowed down significantly.

The main reason is that short-term and local factors such as this round of epidemics and floods have been affected, but the overall momentum of consumption recovery has not changed.

Affected by the epidemic in the first half of last year, consumption fell sharply and rebounded month by month in the second half of the year. Since August, the base number has continued to rise. Therefore, the year-on-year growth rate has declined since the second half of this year, and the overall pattern will be high and low.

Wang Bin said that consumption will continue to recover steadily in October and even the entire fourth quarter.

Wang Bin pointed out that due to the impact of various factors such as the epidemic, residents' consumption expectations are not yet stable, the basis for consumption recovery is not yet solid, and the operation of physical businesses, especially small, medium and micro enterprises, is still relatively difficult.

In response to the current situation, in order to seize the favorable opportunities of the golden nine and silver ten, the year-end and new-year sales seasons, on the basis of implementing various epidemic prevention and control measures, and solidly promote the promotion of consumption, the Ministry of Commerce recently issued a document to promote consumption from three aspects. Continuous and stable recovery.

Automobiles, home appliances, furniture, and catering are the pillars of the consumer market, accounting for about a quarter of the total retail sales.

In the next step, it is necessary to accelerate the transformation of automobiles from purchase management to use management, and in-depth development of new energy vehicles to the countryside to promote the consumption of new vehicles.

The second is to accelerate the development of new types of consumption.

New consumption is an important growth point in the consumer market. From January to August, online retail sales of physical goods accounted for 23.6% of the total retail sales.

In the next step, we must support traditional commercial enterprises to accelerate digital and intelligent transformation, and encourage the development of new business models and models such as smart stores and contactless distribution.

Promote the continuous, innovative and healthy development of cross-border e-commerce imports, play the role of important exhibition platforms such as the China International Import Expo and the Canton Fair, and expand import consumption.

The third is to optimize and upgrade the carrier of the consumption platform.

Accelerate the promotion of the cultivation and construction of international consumption center cities, and give full play to the demonstration and leading role of Shanghai, Beijing, Guangzhou, Tianjin, and Chongqing.

Speed ​​up the implementation of urban commerce promotion actions, create characteristic business circles and characteristic neighborhoods, and accelerate the construction of a quarter of an hour convenient living circle.

Continue to organize and carry out key consumption promotion activities such as the Chinese Food Festival and the time-honored carnival, and encourage all localities to seize the golden, nine, and silver ten, the year-end and new-year consumption peaks, and organize the integration of business, travel, culture and sports, and online and offline integration under the premise of preventing and controlling the epidemic. , Various activities to promote consumption in urban and rural areas will further enhance market sentiment and release consumption potential.

In addition, Wang Bin emphasized the deployment of local governments to implement the policies and measures that have been issued to aid enterprises, actively coordinate with relevant departments, and increase support for enterprises in difficulties in the trade and circulation industry, especially small, medium and micro enterprises, so as to help enterprises continue to operate and expand sales.