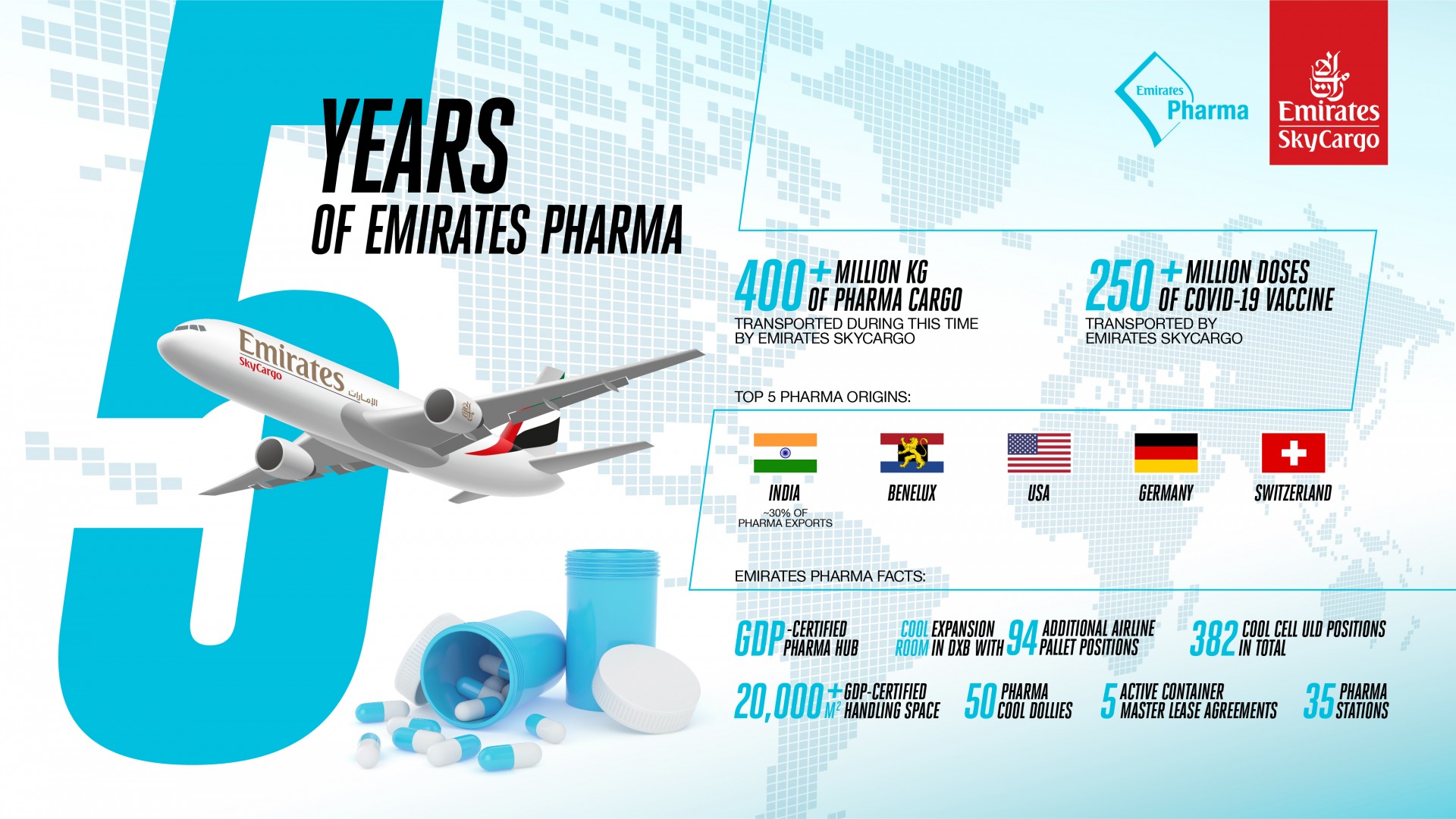 In September 2016, Emirates' cargo arm raised global standards for the transportation of these products with the opening of the Emirates Pharma facility at Dubai International Airport, and the launch of three specialized products to handle these heat sensitive products.

Emirates Airline Senior Vice President, Cargo Department, Nabil Sultan, said: “We realized early on in Emirates Air Cargo that our customers increasingly need specialized solutions for their shipments, especially valuable and life-saving medicines whose transport requires very strict procedures and conditions. After extensive planning and significant investments in our infrastructure and operations. And our employees, in September 2016, we offered our customers a comprehensive solution, backed by the latest handling facility in Dubai that is certified under the EU Standards for Safe Transport Practices for Drugs (GDP) standards.This solution met with a wide response, and we were quickly able to transform the idea that Dubai was a must-do destination for summer drug shipments into Dubai. A center that is trusted by pharmaceutical customers all year round. Pharmaceutical shipment volumes have continued to grow over the years, as we have transported under the Emirates Pharma umbrella so far more than 400 million kilograms (400,000 tons) of pharmaceutical products.”

At its hub in Dubai, Emirates SkyCargo has more than 20,000 square meters of storage and handling space compliant with EU standards for safe drug transport practices.

It handles about 200,000 kilograms (200 tons) of medicine every day, including vaccines, biological preparations and medicines for diseases such as cancer, diabetes and other medical treatments.

Emirates Air Cargo owns the largest number of refrigerated containers designated to maintain the stability of the temperature of shipments when transported from aircraft to the air cargo building at the airport.

It also allocates more than 50 refrigerated containers for medicines only.

The carrier cooperates with a number of specialized container suppliers in order to provide customers with the best options for their specific requirements.

The establishment of the Emirates Air Cargo Center in Dubai, which is dedicated to storing and distributing vaccines, facilitated the rapid and safe transportation of medicines from manufacturing sites to final destinations.

Over the past years, the carrier has been able to deliver drug shipments to markets across six continents, including India, Germany, Belgium, the Netherlands, the United Kingdom, Russia, the United States of America, Brazil, Australia, Korea, Japan, the United Arab Emirates, Saudi Arabia and Egypt.

About a third of all Emirates Air Cargo shipments of medicines come from India.

Emirates SkyCargo has also cooperated with ground handling companies in more than 35 airports to ensure effective handling of drug shipments from the point of origin to the final destination.

In Chicago, one of the major drug terminals in the Emirates SkyCargo network, it worked closely with the local ground handling company to develop a dedicated drug handling facility certified under EU standards.

The area of ​​the facility exceeds 1000 square meters.

In 2019, Emirates Air Cargo's operations to handle drug shipments in Copenhagen moved to a dedicated European approved facility as well.

During the spread of the pandemic, Emirates Air Cargo maintained supply chains around the world for the transportation of medicines, “Covid-19” treatments and other diseases.

By operating cargo flights on passenger planes, it was able to transport urgently needed medicines across the world.

In August 2021, Emirates SkyCargo began working to enhance its capabilities in the field of handling vaccines in Dubai by expanding the fully automated cold room, and adding 94 container sites in its pharmaceutical facility at Dubai International Airport, which is certified according to European standards.

An enlarged refrigeration chamber provides an additional area of ​​​​the environment that can be adjusted between 2° and 25°C to accommodate 60-90 million doses of vaccine at once.

Between October 2020 and September 2021, Emirates Air Cargo transported more than 250 million doses of "Covid-19" vaccines to more than 75 destinations via Dubai.

The carrier also signed a memorandum of understanding with UNICEF to prioritize the transportation of "Covid-19" vaccines in support of the COVAX Facility, the global initiative aimed at equitable global distribution of vaccines.

In May 2021, Emirates SkyCargo launched a humanitarian air bridge to support India's efforts to combat the "Covid-19" pandemic and donated cargo capacity to transport essential supplies, such as relief tents, thousands of oxygen cylinders and condensers, free of charge on flights it operates to its destinations in India. .