Yesterday, the US Apple Stores in the country launched the versions of its new iPhone, which include: iPhone 13, iPhone 13 Pro, iPhone Pro Max and iPhone 13 models. Mini”, which are all supported by fifth generation technologies, and a new processor that is faster than previous versions that include 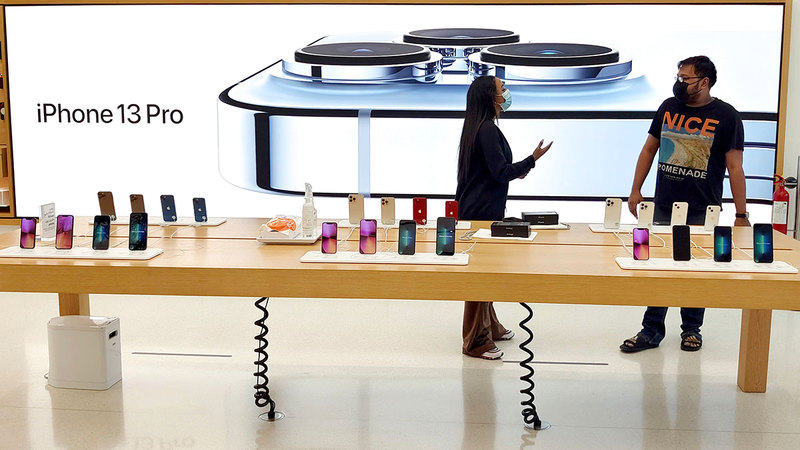 It comes with 5G technology and improvements in the screen, camera and battery

Yesterday, the US Apple Stores in the country launched the versions of its new iPhone, which include: iPhone 13, iPhone 13 Pro, iPhone Pro Max and iPhone 13 models. Mini, which are all powered by 5G technologies, and a new processor that is faster than previous versions that includes the A15 Bionic chip.

And “Emirates Today” monitored, through a field tour of the Mall of the Emirates, the launch of “Apple” its new phones, amid the application of precautionary measures and measures for social separation, and obligating customers who queued to wear masks, as part of measures to confront the spread of the new Corona virus ( COVID-19).

The “Apple” store in the shopping center witnessed a moderate turnout during the morning and noon hours, which some attributed to the company’s application of the advance reservation system, to avoid any crowding that violates the instructions and measures related to combating the pandemic.

The consumer, Ahmed Abdel Rahman, said that he was keen to acquire the “iPhone 13” phone, early from the official launch, as part of the update for the new version, and to benefit from the speed of the new processor in the phone.

In turn, the consumer, Muhammad Bashir, said that he decided to buy an "iPhone 13 Pro", as well as an "iPhone Mini" for a member of his family.

He considered the recent improvements to the phone, especially in the “iPhone 13 Pro” and “iPhone 13 Pro Max” versions, related to imaging technologies, and battery capabilities, as motivating factors for the purchase.

As for the consumer, Ali Hedayat, he told "Emirates Today" that he and a friend bought the "iPhone 13" and "iPhone 13 Pro", stressing that he plans to buy the "iPhone 13" for a member of his family soon.

He said that the early purchase of new phones, the moment they were launched by manufacturers, has become an important issue for some consumers.

Apple announced the launch of its new phone versions, with the release of the ninth generation of its iPad and iPad mini tablet, with a new screen design.

The new phone versions include improvements in screen technologies, as they allow brightness up to 28% compared to previous versions, which improves the level of brightness and visibility in general for phone screens, in addition to the advantages of the speed of the new processor via the “A15 Bionic” chip.

The company also introduced improvements in camera systems, with the provision of cinematography or “Cinematic Mode”, and improved the capabilities of batteries, especially in the two versions: “iPhone 13 Pro” and “iPhone 13 Pro Max”.