China News Service, Beijing, September 24 (Reporter Sun Zifa) Can carbon dioxide synthesize starch? To this seemingly fantasy question, Chinese scientists have given affirmative and detailed answers for more than 6 years of scientific research. Following the completion of the world's first synthetic synthesis of crystalline bovine insulin in the 1960s, Chinese scientists have made major disrupti 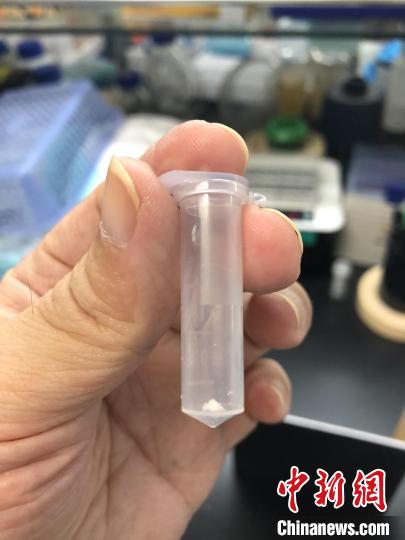 To this seemingly fantasy question, Chinese scientists have given affirmative and detailed answers for more than 6 years of scientific research.

Following the completion of the world's first synthetic synthesis of crystalline bovine insulin in the 1960s, Chinese scientists have made major disruptive and original breakthroughs in the synthesis of starch. For the first time in the world, the de novo synthesis of carbon dioxide to starch has been achieved in the laboratory.

The paper on major scientific and technological breakthroughs in synthetic starch, led by Tianjin Institute of Industrial Biotechnology, Chinese Academy of Sciences (Tianjin Institute of Industrial Biology, Chinese Academy of Sciences), was published online in the famous international academic journal "Science" in the early morning of September 24, Beijing time. The manufacture of carbon dioxide into starch production in the industrial workshop "opened a window."

Researchers from Tianjin Institute of Industrial Biotechnology of the Chinese Academy of Sciences displayed artificially synthesized starch samples in the laboratory.

The rate of starch synthesis by this artificial pathway is 8.5 times that of corn starch. It is a big step towards the realization of the goal of designing nature and surpassing nature. It will provide a new scientific basis for the creation of new functional biological systems, and it will also provide a new scientific basis for the future from carbon dioxide. Synthetic starch opens up a new path, making the industrialized biological manufacturing of starch possible in the future.

According to industry experts, if the cost of the systemic process of carbon dioxide artificial synthesis of starch in the future can be reduced to be economically feasible compared to agricultural planting, it will save more than 90% of arable land and fresh water resources, and avoid the negative impact of pesticides and fertilizers on the environment. Promote the formation of a sustainable bio-based society and improve the level of human food security.

At the same time, the latest research results have realized the combined artificial starch synthesis pathway (ASAP) of chemical-biological method for synthesizing starch with carbon dioxide and hydrogen produced by electrolysis in a cell-free system, which is aimed at advancing the goal of "carbon peak" and "carbon neutrality". The technical route provides a new way of thinking.

According to the Tianjin Institute of Industrial Biology, Chinese Academy of Sciences, starch is the most important ingredient in food, and it is also an important industrial raw material.

At present, starch is mainly produced by corn and other crops through natural photosynthesis to fix carbon dioxide. The synthesis and accumulation of starch involves more than 60 steps of metabolic reactions and complex physiological regulation, and the theoretical energy conversion efficiency is only about 2%.

The cultivation of crops usually takes a long period of time, and requires the use of a large amount of land, fresh water and other resources, as well as agricultural production materials such as fertilizers and pesticides.

The food crisis and climate change are major challenges facing mankind. The sustainable supply of food starch and the conversion and utilization of carbon dioxide are the strategic directions of scientific and technological innovation in the world today.

Instead of relying on plant photosynthesis, designing an artificial biological system to fix carbon dioxide to synthesize starch is a major disruptive technology affecting the world.

Since 2015, the institute has focused on the biotransformation and utilization of synthetic starch and carbon dioxide, carried out demand-oriented scientific and technological research, gathered innovative resources inside and outside the institute, strengthened the integration of "discipline-task-platform", and realized the organic integration and efficient coordination of scientific research forces of all parties. Establish a team of outstanding young scientists with an average age of 30, and continue to cultivate the research and development of synthetic starch projects for 6 years.

A team of young scientists devised an 11-step reaction of unnatural carbon dioxide fixation and a new way to artificially synthesize starch from the ground up, achieving the full synthesis of carbon dioxide to starch molecules for the first time in the laboratory.

They adopted a method similar to "building blocks" and combined with the Dalian Institute of Chemical Physics, Chinese Academy of Sciences, to use chemical catalysts to reduce high-concentration carbon dioxide to carbon-one (C1) compounds under the action of high-density hydrogen energy, and then build carbon-polymerization through design The new enzyme polymerizes carbon one compounds into carbon three (C3) compounds according to the principle of chemical glycan reaction, and finally optimizes the biological pathways to polymerize the carbon three compounds into carbon six (C6) compounds, and then further synthesizes straight and branched chains. Starch (Cn compound).

The team also innovated the biological process technology using high-density energy and high-concentration carbon dioxide by coupling the chemical catalysis and biocatalysis module system, and through the optimization of reaction time-space separation, it solved the artificial pathways such as substrate competition, product inhibition, thermal/kinetic matching, etc. Problem, expand the ability of artificial photosynthesis.

According to the current technical parameters, under the condition of sufficient energy supply, the theoretical annual starch output of a 1 cubic meter bioreactor is equivalent to the starch output of 5 acres of corn planting (calculated based on the average yield of corn starch in China).

This achievement makes it possible to transform the traditional agricultural planting model of starch production to the industrial workshop production model, and opens up a new technical route for the synthesis of complex molecules from carbon dioxide raw materials.

The major disruptive achievements made by Chinese scientists in the artificial synthesis of starch have also been highly praised by domestic and foreign experts in the same field. They believe that this is a "typical 0 to 1 original breakthrough", and is "a major breakthrough in the frontier research field of expanding and enhancing the capabilities of artificial photosynthesis." A breakthrough is a scientific research result of great significance "indomitable" "not only has a revolutionary impact on future agricultural production, especially food production, but also has a milestone significance for the development of the global biomanufacturing industry." Bringing a transformative impact in the next generation of biological manufacturing and agricultural production".