The tragedy of the pet blind box reappears! Zhongtong denies discarding, how to plug loopholes?

Chinanews client, Beijing, September 22 (Reporter Zhang Xu) The tragedies of two blind pet boxes in May are still vivid. After less than half a year, the blind pet boxes were discarded and the pets died again. Hundreds of blind boxes for cats and dogs were abandoned, Zhongtong refutes rumors   On the afternoon of September 20, a large number of blind boxes for live pets were found at the entra 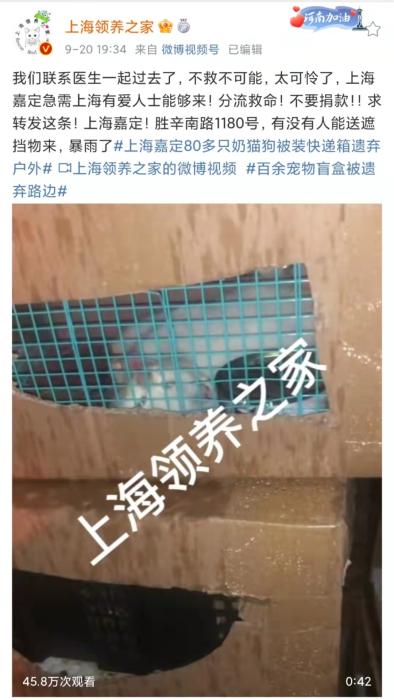 Chinanews client, Beijing, September 22 (Reporter Zhang Xu) The tragedies of two blind pet boxes in May are still vivid. After less than half a year, the blind pet boxes were discarded and the pets died again.

Hundreds of blind boxes for cats and dogs were abandoned, Zhongtong refutes rumors

On the afternoon of September 20, a large number of blind boxes for live pets were found at the entrance of a community on Lehui Road, Jiading District, Shanghai. Hundreds of cats and dogs were packed in cages covered by cartons, shivering, wailing, and some of them were dead.

On the 21st, the cute pet blogger "Shanghai Home for Adoption" announced that the rough statistics of the rescued animals include 71 cats and 36 dogs. 36 dogs have been diverted, and all healthy cats have also been adopted.

On the 22nd, in response to the above incident, social media spread a large number of videos of Zhongtong outlets suspected of illegally sending cats, dogs and pets. Zhongtong responded to the reporter of Chinanews.com: After verification, Zhongtong confirmed that the behavior involved in the video has nothing to do with Zhongtong outlets. The relevant Zhongtong outlets have reported to the local police and provided the police with clues about the owner of the cargo and the carrier.

At the same time, Zhongtong stated that it will strictly follow the relevant requirements of the State Post Bureau to regulate the delivery of live objects, and the delivery of cats, dogs and pets is strictly prohibited throughout the network.

In half a year, three tragedies of blind pet boxes have attracted attention

In reality, as the blind box economy prevails, blind pet boxes have also become popular in a certain range, and the delivery of pets or living objects has become part of the business of express companies.

In fact, this is not the first time that the blind pet box has attracted attention.

In less than half a year, the blind pet box has caused many tragedies of pet deaths.

In May, volunteers of the "Chengdu Love Home Animal Rescue Center" intercepted a Zhongtong express car carrying a large number of blind boxes of pets after receiving reports from netizens.

After investigation, among the 177 pet shipments collected by Zhongtong Express's Hehuachi branch in Chengdu, 36 live cats and 141 dogs were found.

A few days later, on May 11, a live cat and dog express appeared at a Zhongtong express station in Suzhou, Jiangsu. A total of 13 express parcels of live animals were found at the scene, and the animals were all dead.

Subsequently, the Changzhou Post Administration Bureau sent a notice of administrative punishment opinions to Wuxi Zhongtong Express Co., Ltd., which was suspected of receiving and sending items with uncertain safety, and imposed a fine of 30,000 yuan on the administrative penalty.

How to plug loopholes in the transaction chain?

Express expert Zhao Xiaomin told a reporter from Chinanews.com that the delivery of live animals is strictly regulated, the inspection and quarantine procedures provided by the merchants should be complete, and express logistics companies must also carry out classified transportation. All parties should not tacitly disclose or operate illegally for their own interests.

Zhao Xiaomin said: “From a regulatory perspective, whether it is postal, e-commerce, or animal and plant quarantine regulations, with the active online economy, the regulatory rules need to be updated and followed up to clearly define the responsibilities of all parties involved. Regulation. Institutional specifications should be as advanced as possible, and at the same time form a linkage with the quarantine department; top-ranked express logistics companies, especially listed companies, can formulate internal regulations higher than national standards, and form linkages with regulatory agencies to ensure smooth information. "

"The prerequisite for the high-quality development of the express delivery industry is safety and animal protection, and it is also the corporate social responsibility. The delivery of live objects is the touchstone of whether the company is professional and standardized, and whether the law enforcement of the regulatory agencies is in place is also a test." Zhao Xiaomin said.

China-Singapore Microcomment: Animals are also life, not everything can be blind box

From stationery blind boxes to pet blind boxes, from offline to online, some people will inevitably want to get a few barrels of real gold under the tide, but it is by no means a "blind box for everything."

The biggest difference between the pet blind box and other blind boxes is that it contains life instead of items that can be discarded at will.

Without reverence for life and lack of institutional constraints, it is inevitable that blind boxes for pets will be leaked, hurting people's hearts and pets' lives.

For the new problems induced by the new model, it is necessary to make up for shortcomings, plug loopholes, and implement precise policies in order to make the blind box play a good role in economic and social benefits.