China-Singapore Jingwei, September 22. The People’s Bank of China authorized the National Interbank Funding Center to announce that on September 22, 2021, the quoted interest rate (LPR) of the loan market is 3.85% for 1-year LPR, and 4.65 for LPR over 5-years. %. The above LPR is valid until the next LPR is issued.   So far, LPR has "stayed in place" for 17 consecutive months.   Image source: 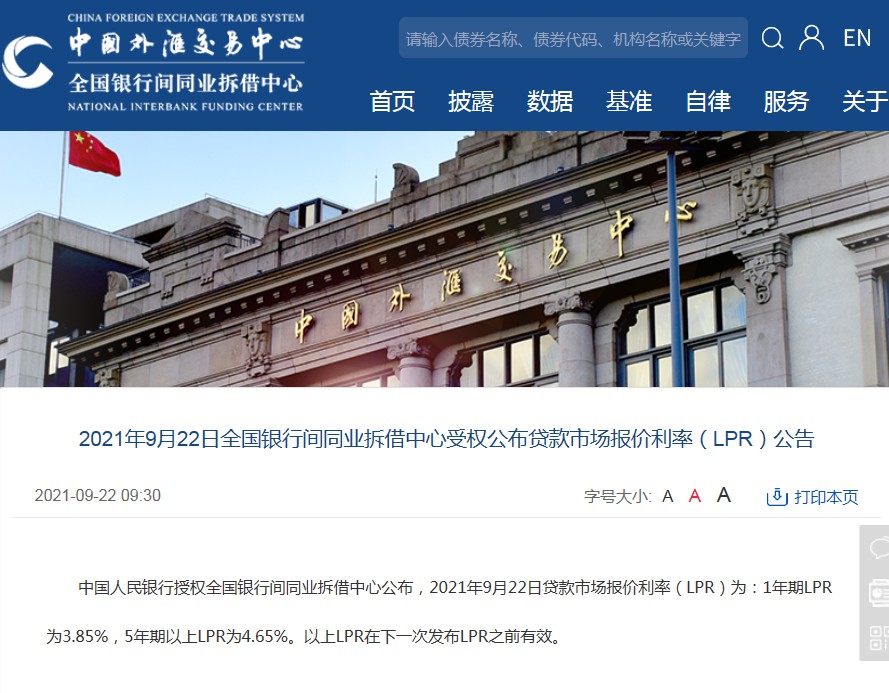 China-Singapore Jingwei, September 22. The People’s Bank of China authorized the National Interbank Funding Center to announce that on September 22, 2021, the quoted interest rate (LPR) of the loan market is 3.85% for 1-year LPR, and 4.65 for LPR over 5-years. %.

The above LPR is valid until the next LPR is issued.

So far, LPR has "stayed in place" for 17 consecutive months.

The Sino-Singapore Jingwei client noticed that on September 10, in order to increase the relief and assistance for small, medium and micro enterprises, the People's Bank of China added 300 billion yuan of small reloan lines.

On September 15, the central bank announced that in order to maintain a reasonable and sufficient liquidity in the banking system, it will carry out 600 billion yuan of medium-term loan facility (MLF) operations and 10 billion yuan of reverse repurchase operations.

On September 17, the central bank restarted the 14-day reverse repurchase.

Xu Dongshi also said that the central bank's monetary operations have changed attitudes, and my country's monetary policy is quietly changing, but more significant changes need to wait for the relaxation of real estate credit.

Oriental Jincheng commented on September 16 that the MLF maturity scale in September was large, and the central bank implemented an equivalent sequel, indicating that the policy supports moderately easy bank liquidity in the medium and long term, which will help drive the growth of credit and social financing in the short term. Major financial data bottomed out and rebounded.

In September, the MLF operating interest rate remained unchanged, and the market "interest rate cut" is expected to further cool down.

Oriental Jincheng also said that the MLF operating interest rate remained unchanged in September, indicating that the LPR quotation announced on September 22 is expected to remain unchanged, but the momentum for the downward adjustment of the 1-year LPR quotation is still accumulating.

Everbright Securities issued a research report on September 21, stating that the scale of the base currency released through various types of refinancing in 2021 is no less than a one-time RRR cut, which has the effect of "structural RRR cuts and interest rate cuts."

During the year, the probability of the central bank lowering the RRR again is low.

If linearly extrapolated according to the two rounds of rules, the next deep release of mid-to-long-term liquidity may fall in the first quarter of 2022 to support a "good start" for credit at the beginning of the year.

On September 7, Pan Gongsheng, Vice Governor of the People’s Bank of China and Director of the State Administration of Foreign Exchange, pointed out that in the next step, the People’s Bank of China will implement a prudent monetary policy, maintain reasonable and sufficient liquidity, and maintain the growth rate of money supply and social financing at the same rate as the nominal economy. The growth rate basically matches. At the same time, do a good job in cross-cycle policy design, and make overall consideration of the convergence of monetary policy this year and next year. At the same time, we are self-centered in monetary policy considerations to enhance the autonomy of monetary policy. In terms of structural monetary policy, we will increase policy support for key areas and weak links. For example, the targeted support role of tools such as re-lending and rediscounting, the further use of two monetary policy tools that directly reach the real economy, and the use of the 300 billion yuan additional small-scale re-lending line proposed by the State Council executive meeting. At the same time, the People's Bank of China will set up carbon emission reduction support tools to guide finance to accurately increase support for key areas and weak links such as small, medium and micro enterprises, green development, and technological innovation. (Zhongxin Jingwei APP)