Unlocking video members on all major platforms of the entire network for a penny? Be careful to fall into the trap!

Unlock all network video members for a penny? Be careful to fall into the trap!   Sino-Singapore Jingwei Client, September 10 (Chang Tao intern Huang Chenfa) "Buying a video platform for an annual membership costs two to three hundred yuan, and now one cent can permanently watch member videos on all major platforms across the network. Watching advanced on-demand, you are not excited?!" Recently 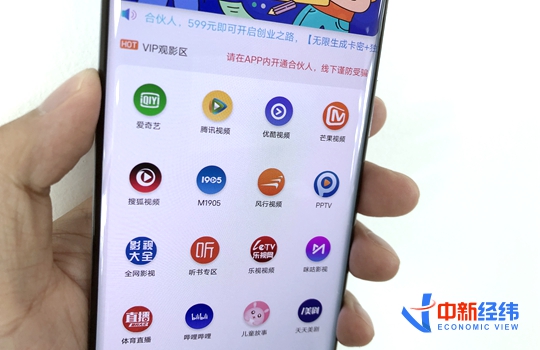 Unlock all network video members for a penny?

Be careful to fall into the trap!

Sino-Singapore Jingwei Client, September 10 (Chang Tao intern Huang Chenfa) "Buying a video platform for an annual membership costs two to three hundred yuan, and now one cent can permanently watch member videos on all major platforms across the network. Watching advanced on-demand, you are not excited?!" Recently, the advanced on-demand function of popular dramas on the video platform has caused heated discussions. While netizens complained that the platform is "too ugly", cyber gangsters are also ready to move.

A reporter from China-Singapore Jingwei noted that on the e-commerce platform, there are a large number of products that "permanently watch member videos".

These products are not only priced as low as a penny, but also powerful, no ads, Blu-ray, and more importantly, you can watch advanced on-demand content.

Further investigation found that it has become an industry chain to generate and sell accounts for permanent viewing of members' videos on the entire network.

Some teams advertise that after paying to join the team, the monthly income can reach one million yuan.

The lawyer reminded that "permanently watch the entire network member video" is suspected of illegally hacking the video platform security and stealing resources, which is a criminal offence.

For consumers, purchasing and logging in to such accounts can easily cause personal privacy leakage and property damage.

Photographed by Chang Tao, the new Jingwei in the data map

One app for a penny, get all members' videos on the network

Reporters from Sino-Singapore Jingwei searched for keywords such as "chasing drama artifact" and "permanent VIP video" on Taobao, Pinduoduo and other platforms. There are a large number of related products on sale, and the transaction volume of some products has exceeded 100,000.

The order price of this product is only 0.01 yuan. After the reporter of Sino-Singapore Jingwei placed the order, the customer service of the store immediately sent instructions on how to use it.

The customer service said: "To use the permanent video member, you need to download the specified App, and you can watch it directly in the App." Then it sent the download link of the App.

After copying the download link to the mobile browser, a reporter from Sino-Singapore Jingwei downloaded an app called "Quanquan Film and Television".

After completing the registration, spend 0 yuan to become an annual member, and you can get VIP rights such as unlimited viewing of dramas, exclusive episodes, free advertising rights, and exclusive logos.

A reporter from China-Singapore Jingwei noted that the "Quanquan Film and Television" app did not differentiate the content of video platforms such as Tencent, iQiyi, and Youku, but mixed them together.

The search found that some popular solo dramas can be watched on the App.

For example, Tencent Video’s solo drama "Yunnan Worm Valley" can watch 14 episodes under the membership mode, including 3 episodes on demand.

However, the 14 episodes of "Yunnan Worm Valley" can be unlocked and watched in the "Quanquan Film and Television" app.

Subsequently, a reporter from Sino-Singapore Jingwei bought the account again at Pinduoduo's "Super God Film and Television Store" store for one yuan.

According to the customer service, "For one yuan, the current mainstream video platform member movies, TV series and advanced on-demand dramas can be watched for free through our software forever, without spending more money to open members on various platforms." China-Singapore Jingwei reporter I downloaded an app called "Yunmeng Yingyin" through the link provided by the customer service. After entering the activation code, I got the "permanent VIP" rights.

Through experience, it is found that some of the dramas that have been opened for advance-on-demand can be watched normally in the Yunmeng Yingyin App.

It is worth noting that the two apps, Quanquan Film and Television and Yunmeng Yingyin, cannot be retrieved in the app store.

Has become an industry chain, join the team to earn one million a month?

China-Singapore Jingwei reporters found that the experience of watching videos with the above App was poor, not only the picture was blurred, the white light was heavier, but also the problems of stuttering and failure to load frequently occurred. A video of less than two minutes appeared four times of stuttering.

In addition, the Yunmeng Yingyin App is also full of side-by-side advertisements such as "private live broadcasts", and it is easy to miss the point if you are not careful.

Further investigation found that it has become an industry chain to generate and sell accounts for permanent viewing of members' videos on the entire network.

On the Yunmeng Yingyin App, there are a large number of advertisements for recruiting partners.

Recruitment information shows that you can become a partner of "Yunmeng Yingyin" by paying 599 yuan, and enjoy 8 benefits such as self-generated activation code and unlimited card password generation.

After becoming a partner, you can not only earn income from the sale of activation cards, but also rebate through the development of lower-level partners.

" wrote in the recruitment information.

Regarding the partner recruitment information, the store customer service said that it is not their responsibility, they are only responsible for selling the account, and it is not clear who is managing it.

Regarding how these accounts are generated, the customer service only claims to be "through technical means."

Hu Gang, deputy secretary-general of the Legal Affairs Committee of the Internet Society of China, said in an interview with a reporter from China-Singapore Jingwei that this model of forming levels in a certain order and directly or indirectly using the number of development personnel as the basis for remuneration or rebates is a solid MLM. , The relevant behavior has violated the criminal law.

The customer service of the above-mentioned "Super God Film and Television Shop" said that the software is absolutely safe and free of any viruses, so you can use it with confidence.

Youku’s official customer service stated that this type of software is unofficial and cannot guarantee safety.

"Regarding the sale of video resources on third-party platforms, we have reported it to Youku's technical team and will make corresponding measures." Youku's official customer service said.

Subsequently, a reporter from Sino-Singapore Jingwei complained to the official customer service of the e-commerce platform for the above-mentioned product link. The customer service said that it will verify the merchant's problem as soon as possible.

Taobao's official customer service also stated that the platform will focus on monitoring merchant services and ensuring product quality, and the platform will never allow merchants to treat consumers casually.

Hu Gang said that the

sale of so-called permanent member video accounts is mainly suspected of infringing copyright, and also suspected of undermining network security, which is a criminal offence.

"Because these video platforms have security precautions, cracking them through technical means violates the law. In addition, the production and sale of counterfeit accounts has caused huge economic losses to the video platform, and it has also violated the law."

Chen Yinjiang, deputy secretary-general of the Consumer Rights Protection Law Research Association of the Chinese Law Society, told reporters from China-Singapore Jingwei that the state has the right to confiscate the illegal gains in such cases of illegally stealing the work of others.

According to Article 1185 of the Civil Code, if the circumstances are serious, the infringed person has the right to request corresponding punitive damages.

Hu Gang said that in this situation, consumers can report to the electronic platform and request the platform to block and remove related products.

If the e-commerce platform does not take relevant measures in time, the platform may be liable for assisting the crime.

A reporter from China-Singapore Jingwei noticed that there is a disclaimer in the Yunmeng Yingyin App: "All videos on this site are from the Internet, and the copyright belongs to the original creator. If you unintentionally infringe your rights, please notify us. We will Deleted within normal working days, thank you for your understanding."

reprinting of information and videos disclosed on the Internet. And the merchant steals resources through illegal means, so this disclaimer has no meaning."

As of press time, the above reported products have been removed from the shelves.