"Another step towards solving many problems": construction of the "Nord Stream - 2" is completed

The construction of the Nord Stream 2 trans-Baltic gas pipeline has been completed. This was officially announced by Gazprom and the operator of the Nord Stream 2 AG project. The last technical step was the connection of the sections of the second line. Further, commissioning works will be carried out, which will make it possible to put Nord Stream 2 into operation by the end of the year. Project participants and experts emphasize that its completion will meet the long-term needs of the European Union and strengthen its energy security. 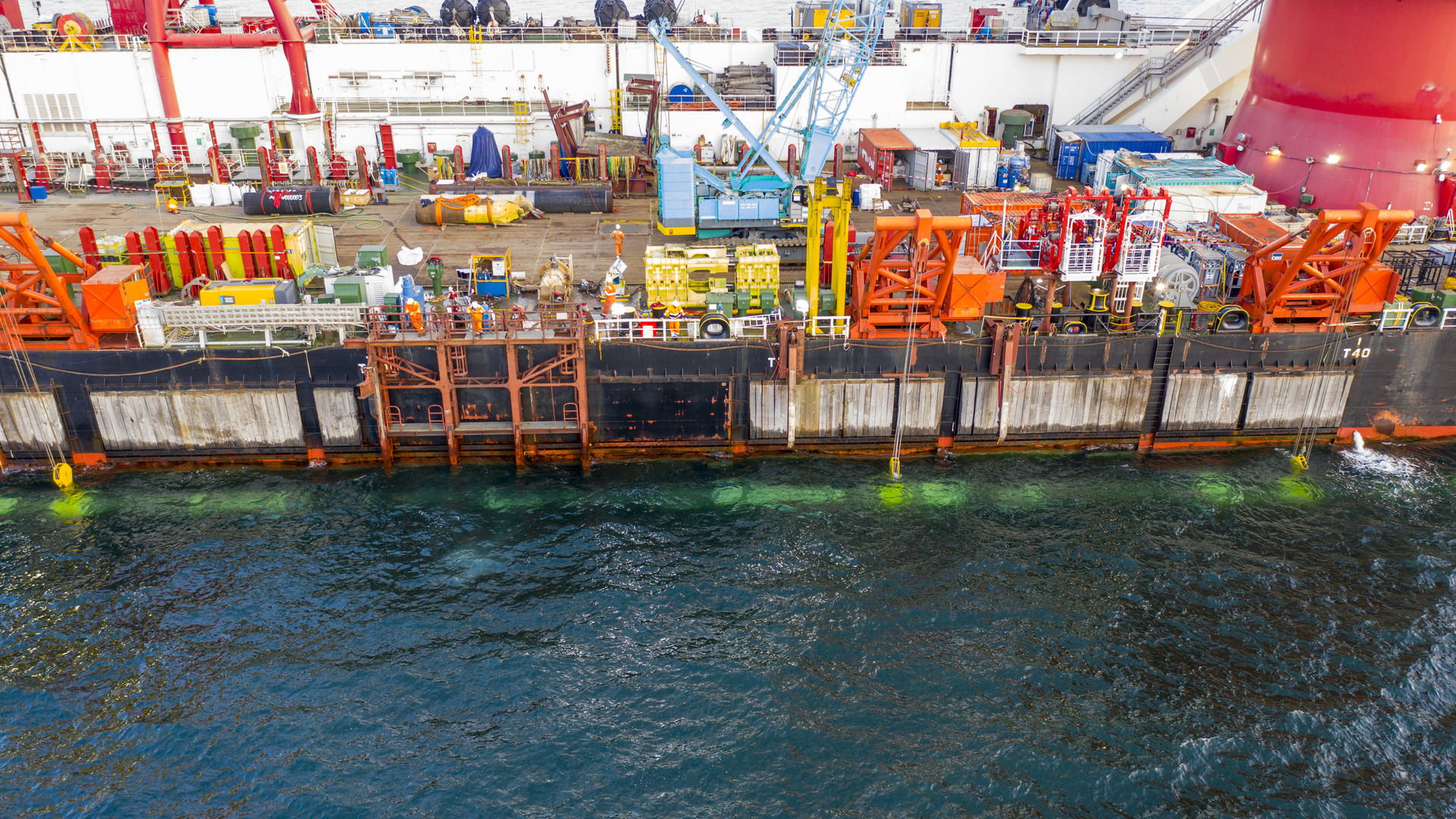 On Friday, September 10, the construction of the Nord Stream 2 trans-Baltic gas pipeline was completed.

This was announced by the press service of the Gazprom corporation.

“At a morning operational meeting at PJSC Gazprom, Chairman of the Management Board Alexei Miller said that this morning at 8:45 Moscow time, the construction of the Nord Stream 2 gas pipeline has been fully completed,” the release says.

The operator of the project Nord Stream 2 AG explained that the final technical stage was the connection of the sections of the second line of Nord Stream 2, coming from the coast of Germany and from the waters of Denmark, with the help of a surface overflow.

“The ends of the sections stretching from opposite sides were lifted from the bottom above the sea surface by the Fortuna pipe-laying barge, cut to the required length and connected.

The welded seam was made on a surface platform, fixed on the outer side of the ship's side, after which a single completed pipeline was submerged on the seabed, ”the company said.

“Further commissioning works will be carried out to put the gas pipeline into operation before the end of this year,” added the press service of Nord Stream 2 AG.

They stressed that Nord Stream 2 is designed to meet the long-term needs of the EU energy market for natural gas imports, ensuring safe and reliable supplies.

According to the press secretary of the Russian President Dmitry Peskov, the completion of the project is "another step - an important, decisive step - on the way to solving many problems."

Answering the question about the possible timing of the gas pipeline launch, he stated: “This will depend on the fulfillment of the remaining formalities.

You see: gas prices are really galloping now, so gas is needed. "

During a briefing in Berlin, official representative of the German government Steffen Seibert said that the process of certification of Nord Stream 2 AG as an independent operator of the gas transmission system is underway.

He added that the German side is not yet planning any events to mark the completion of the construction.

In turn, Austrian Economy Minister Margaret Schramböck, in an interview with Sputnik, expressed the opinion that Nord Stream 2 will strengthen Europe's energy security.

She recalled that Vienna initially supported the project, since the EU will face the threat of a shortage of gas imports by 2035.

“One thing is clear: Nord Stream 2 strengthens European independence, since energy supply should be an internal affair of Europeans,” she said.

Recall that two lines of the gas pipeline with a length of more than 1200 km each, passing through the exclusive economic zones and territorial waters of Russia, Finland, Sweden, Denmark and Germany, can provide a total volume of supplies of 55 billion cubic meters.

On September 8, Bloomberg, citing sources, reported that Gazprom plans to start pumping gas through the first string of Nord Stream 2 from October 1, and the company intends to start transporting gas along both lines by December 1.

In mid-August, Gazprom announced that 5.6 billion cubic meters could be supplied via the new pipeline in 2021.

The official representative of the Russian Ministry of Foreign Affairs Maria Zakharova stressed on the eve that the timing of the start of commercial supplies depends on the position of the German regulator: “We expect that millions of European consumers will be able to receive Russian gas via the shortest, most economical and environmentally friendly route in the near future.”

Zakharova also pointed out that, strategically, this project will strengthen Europe's energy security for decades to come.

According to her, it is time for all opponents to stop obstructing him: "The time has come to agree on reasonable, mutually beneficial parameters for the operation of the gas pipeline."

At the same time, the press secretary of the President of the Russian Federation on the air of Channel One stated the fact of Europe's interest in Russian blue fuel, including against the backdrop of a pandemic.

He drew attention to the fact that gas continues to be the cleanest fuel, and pipe gas is guaranteed in terms of volume, rhythm and price: “And this will be the way it will be in the foreseeable future.”

Deputy Chairman of the State Duma Committee on Economic Policy, Industry, Innovative Development and Entrepreneurship Vladimir Gutenyov, commenting on the completion of the construction of Nord Stream 2, noted that this result was achieved not only thanks to Gazprom, but also thanks to the relationship between Russia and Europe, dedication and the will of the country's leadership.

Now, according to him, the energy independence of the European Union will be ensured, and substantial revenues will come to the Russian budget, which will make it possible to solve not only the most important social problems, but also the issues of scientific and technological development of the country.

"Therefore, I believe that this is a victory of common sense over those forces that tried to restrain the economic development of Russia with prohibited methods of competition," the interlocutor of RT concluded, describing the completion of construction as "an important milestone."

Deputy Speaker of the Federation Council Konstantin Kosachev stressed that Nord Stream 2 will diversify routes and reduce the cost of transit, given that a pipeline that meets the most modern environmental requirements will be used.

According to him, this is a common contribution to the energy security of Europe.

The senator added that suspicions that the project is allegedly directed against Ukraine, as well as intimidation of European consumers that Russia will use the gas pipeline as a "weapon" is a consequence of unfair competition.

“The Americans, with the help of their loyal European partners, tried to provide for themselves preferential conditions for competition in the European gas market.

Thank God, this did not happen, this market remains competitive, competition will continue in the future, and all parameters of cooperation will be determined solely by economic factors without a mixture of politics, "added the interlocutor of RT.

He noted that this is what Russia has always spoken about.

“This is what our partners, who, fortunately, are participating in this project in large numbers, and our ill-wishers, who sooner or later will have to admit their obvious wrongness in the process of discussing the project, have to be convinced of this. And I sincerely congratulate those who implemented this project on the completion and success, ”concluded Kosachev.