The number of property market regulation and control exceeded 400 times during the year. 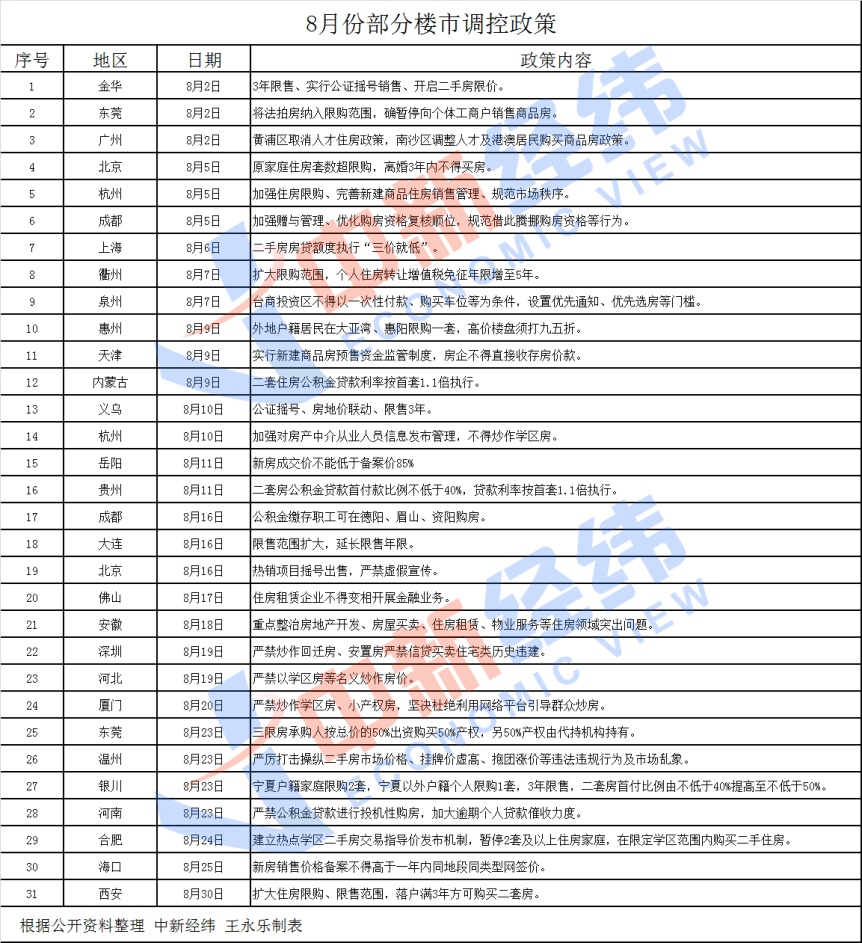 The property market regulation and control hit successively, over 400 times in total during the year!

Institutional data shows that the number of regulation and control of the property market reached a record high of 400 times during the year.

In August, many places released big measures to control the property market, and some areas "patched" and "blocked the loopholes" that existed in the past.

Looking at first-tier cities, Beijing has severely cracked down on "fake divorce" purchases and regulated the sale of new houses.

Starting from August 5, if the couple divorced and the number of housing units owned by the original family before the divorce did not meet the Beijing commercial housing purchase restrictions, no one party may purchase commercial housing in Beijing for 3 years from the date of divorce.

Since then, Beijing has issued a notice to regulate the sales of new houses, and the notarization lottery will give priority to families with no houses, territorial families, and employees of surrounding enterprises and institutions.

For related families, the act of defrauding the qualification of buying a house through divorce has been difficult to get through, blocking the behavior of real estate speculation in disguise through false divorce.

That is, the bank will select the relatively lowest price to approve the loan quota based on the contract price, the transaction center's price verification, and the bank's appraisal price, which can reduce the loan quota.

Shenzhen Centaline Research Center pointed out that the Shenzhen property market, from commercial housing, apartment, school district housing to small property housing, is included in the scope of supervision without exception. The policy may help reduce the expectations of villagers who relocate their houses and promote the implementation of old reform projects in Shenzhen.

In early August, Guangzhou Huangpu District cancelled the talent housing policy, which was released at the end of 2019.

After that, Nansha District adjusted the policies for the purchase of commercial housing by talents and Hong Kong and Macao residents. Household registration, social security and personal tax payment restrictions were the focus of this new policy.

It embodies the policy of "patching" the policy, cracking down on the phenomenon of "fake talents and real real estate speculation", and further implementing the orientation of housing and non-speculation.

Hefei’s “double restrictions” on school district housing is the first in the country.

Including the suspension of the city’s household registration households with 2 or more houses in the urban area, and the purchase of second-hand houses within the school districts such as Hefei No. 48 Middle School.

It is clarified that when the first time to declare the sales price of pre-sale and on-the-sale commercial housing for the record, the declared price shall in principle not exceed the online signing price of the same lot and the same type of project in the previous year.

Dongguan pilots "50% off buying a house".

The pilot program proposes that the three-restricted house (limited house price, limited land price, and limited sales target) shall be shared by the government-appointed agency and the purchaser.

In addition, Inner Mongolia, Guizhou, and Henan have increased the cost of using provident funds. Yinchuan, Dalian, Quzhou and other places have extended the limited sales period or expanded the scope of purchase restrictions. Jinhua and Yiwu have proposed fair lottery sales of new houses, and Hebei, Hangzhou, Xiamen, Wenzhou and other places have It is required not to speculate on school district housing or report group price increases.

To regulate over 400 times during the year, "Golden Nine and Silver Ten" should be cool?

Statistics from the Centaline Real Estate Research Center show that as of August 22, the country’s cumulative real estate regulation and control exceeded 400 times during the year, with an average of more than 50 times a month, and 368 times in the first 8 months of 2020. Since 2021, the real estate regulation and control policy has completely set a new historical record.

Zhang Dawei, chief analyst of Centaline Real Estate, pointed out that under the influence of the overall rise in housing prices, the national real estate control policy blows out. The most important core feature from January to August is tightening: interviews with the Ministry of Housing and Urban-Rural Development, rectification of intermediaries, restrictions on second-hand housing pricing and operation Loan, land supply, encourage leasing, and crack down on speculation about school district housing.

"Interviews with cities where housing prices are rising too fast have become one of the most important features of real estate regulation in 2021. This reflects the strengthening of the supervision role of the Ministry of Housing and Urban-Rural Development on the basis of one city, one policy for real estate regulation. Many cities have been interviewed throughout the year. It also represents the continued strictness of real estate control policies in the second half of the year.” Zhang Dawei analyzed that in the past few years, under the one-city-one policy of real estate control, the central government once again initiated intensive release of policies, especially the Ministry of Housing and Urban-Rural Development and the central bank continued to increase real estate control policies. , The control method, intensity and detail have been significantly upgraded, the control "toolbox" has been continuously enriched, the central real estate control plan has been intensively released, the prudent management of real estate finance has been strengthened, the housing system of multi-subjects supply, and the centralized land supply mechanism in hot cities have been established. Establish a linkage mechanism of "people, houses, land, and money".

Zhang Dawei further pointed out that in the first half of 2021, 13 cities including Guangzhou, Hefei, Ningbo, Dongguan, Nantong, Chengdu, Xi’an, Shenzhen, Shanghai, Beijing, Hangzhou, Wuxi, and Nanchang have been interviewed and supervised by the Ministry of Housing and Urban-Rural Development. The trend of tightening real estate regulation in the first half of the year remains unchanged.

According to Song Yanqing, president of Rand Consulting, the multiple and high frequency of regulation and control policies in 2021 indicate that the "granularity" of policies is becoming more and more refined, and the level of government policies has been improving, but the orientation has not undergone a fundamental change.

"The country is still trying to establish a long-term mechanism to promote the sustainable and stable development of the real estate market."

Regarding the later stage of the property market, 58 Anju Guest House Property Research Institute reported that from the trend of more frequent real estate regulation, it is expected that the regulation will remain strict by the end of 2021.

"From the perspective of the recent regulation and control trend, it is difficult for the market to be hot, because all kinds of regulation are indeed obvious. But this does not mean that the market data must be negative growth." Yan Yuejin further explained that if the scale of the market is large, and this year After the market demand was suppressed in the third quarter, it was released again. Subsequent transaction data in some cities may not see a month-on-month or year-on-year decline.