The second station in "Barakah" begins its operations successfully

Yesterday, the Emirates Nuclear Energy Corporation announced the success of its subsidiary Nawah Energy Company, in completing the process of starting the operation of the second plant reactor, within the Barakah Nuclear Energy Plants in the Al Dhafra region in the Emirate of Abu Dhabi. 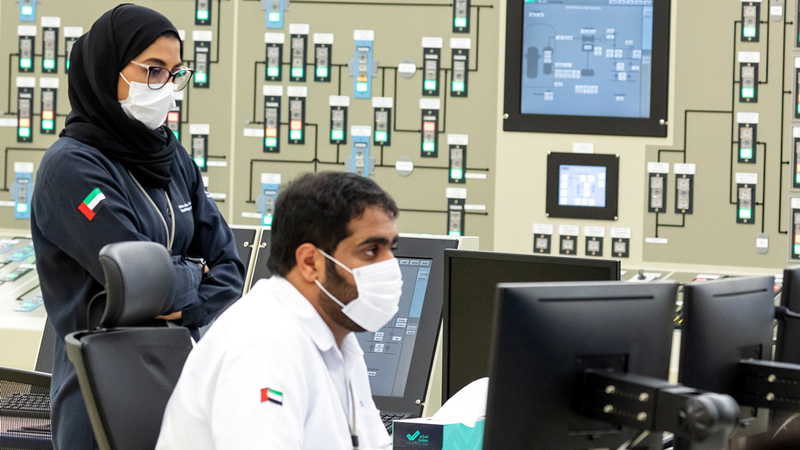 The second station in "Barakah" begins its operations successfully

Yesterday, the Emirates Nuclear Energy Corporation announced the success of its subsidiary Nawah Energy Company, in completing the process of starting the operation of the second plant reactor, within the Barakah Peaceful Nuclear Energy Plants in the Al Dhafra region in the Emirate of Abu Dhabi.

Barakah stations continue to consolidate the UAE’s march of excellence in this sector, through this achievement, which was achieved a year after the start of operation of the first station and five months of commercial operation, which confirms the great progress in the completion of the four Barakah stations in a safe and timely manner. Specific, with the aim of contributing to reducing the carbon footprint of the energy sector in the country.

This historic achievement coincides with Emirati Women's Day, who was an active and key member of the work team from Nawah Energy Company, which successfully started commercial operations at the second plant, reflecting the leading role played by Emirati women in the peaceful nuclear energy sector in the UAE. Contributing to the energy transformation and the production of environmentally friendly electric energy.

The representation of Emirati women working in the nuclear sector in the UAE reaches 20% of its total workforce. This is one of the highest rates of women's participation in institutions operating in the nuclear energy sector around the world, with the highest qualifications in nuclear engineering. The Emirati women's leadership is credited to the efforts of Her Highness Sheikha Fatima bint Mubarak, President of the General Women's Union, President of the Supreme Council for Motherhood and Childhood, Supreme President The Family Development Foundation "Mother of the Emirates", as the main supporter of Emirati women, and a number of Emirati women pioneers, make Emirati women an important and key link in various key sectors in the UAE, and contribute to their efforts in supporting economic diversification and sustainable development.With this achievement, the Barakah plants became the first nuclear energy project in the region, which includes multiple plants in operation, which enhances the economic growth of the country by providing more abundant, reliable and environmentally friendly electric energy. This achievement also highlights the great potential that the state possesses in implementing giant projects through the development of the UAE Peaceful Nuclear Energy Program, which complies with all local regulatory requirements and international standards, as well as the skills, capabilities and expertise of the work teams in Barakah, which are led by Emirati competencies.

In the coming months, the second plant will be connected to the main electricity network in the UAE, and the operating team will begin the process of gradually raising the power level of the plant's reactor, which is known as the "surge power test" in conjunction with continuous monitoring of this process until the maximum reactor capacity is reached. , while adhering to all regulatory requirements and the highest global standards of safety, quality and security.

The Nawah Energy Company, which is part of the joint consortium of the Emirates Nuclear Energy Corporation and the Korean Electric Power Company (KEPCO), completed a comprehensive program of tests before it succeeded in starting the operation of the second plant reactor in Barakah.

These tests were conducted, under the continuous supervision of the Federal Authority for Nuclear Regulation, the independent body that regulates the nuclear sector in the UAE, and come after the completion of the World Association of Nuclear Operators, the pre-commencement review of the second plant, which preceded the issuance of the operating license, which confirms The second plant's commitment to best practices in the global nuclear energy sector.

The start-up phase is one of the most important stages in the journey of the second station, as the plant’s reactor generates heat for the first time through nuclear fission, and this heat is used to generate steam and spin turbines to produce electricity. Safety to ensure the optimal operation of the start-up, benefiting from the previous similar experience in the first station.

By supplying hundreds of thousands of companies and homes with the abundant and environmentally friendly electricity produced by the Barakah plants, the Emirates Nuclear Energy Corporation is unique in leading the largest effort in the region to reduce the carbon footprint, as the first plant in Barakah is the largest single source of electricity in the UAE.

When fully operational, the four Barakah plants will produce up to 5.6 gigawatts of electricity and will reduce more than 21 million tons of carbon emissions every year, equivalent to removing 3.2 million cars from the country's roads annually, which is equivalent to emissions from charging 7.3 Billions of mobile phones every day.

The CEO of Nawah Energy Company, Eng. Ali Al Hammadi, said: “On this important occasion for the Barakah plants, we congratulate the distinguished work teams for completing the start-up process of the second plant.

Preparations will continue in a safe and steadfast manner in order to connect the second station to the main electricity grid, leading to the commercial operation of the second Barakah stations.. We are committed to ensuring operational excellence for all Barakah stations, and we thank our partners in the country and around the world for their continuous support to achieve these achievements according to the highest standards of performance. operational.”

Mohammed Ibrahim Al Hammadi, CEO of the Emirates Nuclear Energy Corporation, said: "Another achievement was achieved today for the UAE Peaceful Nuclear Energy Program, as part of our drive to provide abundant and environmentally friendly electric energy around the clock, as the Barakah plants support sustainable growth and prosperity in the country."

Al Hammadi added: “With the start of operation of the second station in (Barakah), we are now in the middle of the road towards achieving our goal of providing up to a quarter of the UAE’s electricity needs, promoting sustainable growth and in parallel with supporting the country’s efforts to achieve its goals of confronting the phenomenon of climate change. ».

Al Hammadi continued: “With the support and directives of the wise leadership, the Barakah plants have become an example of excellence in the implementation of nuclear energy programs in the world, and a role model for countries wishing to add nuclear energy to their energy resource portfolio, especially since seven of the top 10 countries in the world are the most sustainable. It uses nuclear energy, which not only provides environmentally friendly electricity, but also contributes to enhancing energy security.”

• The four plants will produce up to 5.6 GW of electricity when fully operational.