Teachers and principals rotate in a large area. Is the school district room really cold this time?

Chinanews client, Beijing, August 27th (Zuo Yukun) Since the implementation of the "multi-school division" in Xicheng District, Beijing, the "hard currency" policy for school district housing has frequently appeared. Recently, Beijing has made another major move-to promote the rotation of cadres and teachers on a large scale and in a large proportion. Is the school district room really cold this 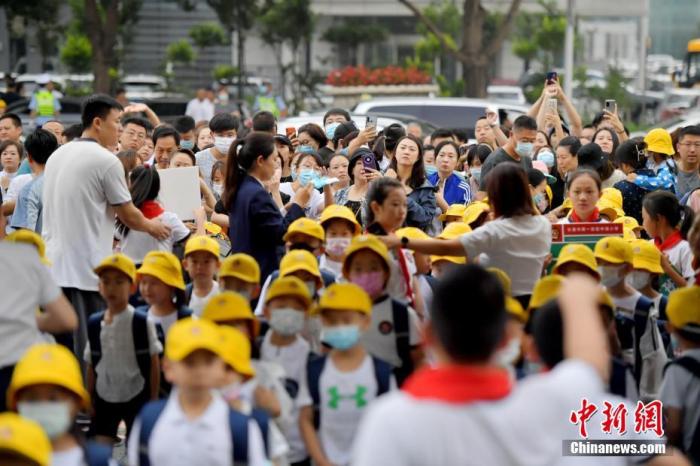 Recently, Beijing has made another major move-to promote the rotation of cadres and teachers on a large scale and in a large proportion.

Is the school district room really cold this time?

"We have not yet started school. We will definitely interpret the policy after school starts. It is still unclear about the school's movement, but our colleagues have been discussing this matter." Li Ting (pseudonym), a junior high school teacher in Beijing, told Chinanews.com.

This policy, which has aroused widespread discussion in the teacher circle, was disclosed at the Beijing Education "Double Reduction" work press conference on August 25. Beijing will promote the exchange and rotation of cadres and teachers in the compulsory education stage on a large scale.

Data map: The parents of freshmen watch the students enter the campus.

"Obviously school district housing will be under pressure," said Yan Yuejin, research director of the Think Tank Center of E-House Research Institute. In the past, education equalization emphasized the equalization of student sources, that is, schools cannot set various thresholds to deliberately select student sources; education is now also balanced. Incorporating the balance of teachers into the reform, the balance of teachers will to some extent hit some famous schools.

The press conference also revealed that Beijing’s Dongcheng District and Miyun District are the first two pilot areas, and the six pilot districts will be launched before the end of this year.

However, no more specific details of job rotation have been announced, such as whether teachers are rotated across school districts or across administrative regions, the proportion of teachers in key schools, and how the rotation time period is set.

"I am in Shunyi District, and the impact is estimated to be small. Moreover, we are an ordinary public school, not a group running school. At present, I heard that it is flowing within a group running school." Li Ting said, "And the key school in Shunyi District is Niulan. Shanyi Middle School, the junior high school and the elementary school are private, and the money is basically available. I think it is not very useful in the Shunyi school district."

But Xu Hui (pseudonym), who lives in Haidian District, is a lot more nervous.

"My child is not in a prestigious school. I was very happy to learn about job rotation. But then I thought, if they still move between students, then the teaching resources are not too different." Ms. Yang, a Beijing citizen, said.

"And I heard that some houses near Haidian schools that were not so good have increased in price because they think they might have a good teacher's turn." Ms. Yang said.

Can the school district room change?

"Don't underestimate the implementation of the policy. Many school districts with too high prices are indeed dangerous, especially Xicheng and Haidian." Zhang Dawei, chief analyst of Centaline Property, said, "But as long as the Beijing school district lock-up system exists, it is more likely Sex is cutting peaks and filling valleys."

“During this period, the school district’s frequent suppression of housing is reflected in performance, and the transaction volume has been reduced by about one-third to one-half.” A real estate agent in the Yuetan area of ​​Xicheng District, Beijing, told Zhongxin.com: “But because More people are in a wait-and-see state, and it is not obvious to reflect on the price. The ones I know the most are probably sold at a price reduction of hundreds of thousands."

In this regard, Zhang Dawei said that the reason for the downward adjustment was the apparent decline in transactions in the two major areas of Desheng and Financial Street.

"Because the policy has just been introduced, teacher rotation is a measure that depends on the long-term effect. At present, we will mainly remind parents who want to buy school district housing to be cautious. If it is not the suggestion for enrollment in the past two years, wait for the policy, and now we are anxious. Buyers should also try to avoid'old and broken small', and assume that they are livable and able to change hands," said the above-mentioned intermediary.

In addition to Beijing, "rotation" has become a hot word in the education industry: Shanghai issued guidelines at the beginning of the year to clarify the objects and conditions for exchanges and rotations of primary and secondary school teachers; not long ago, Shenzhen publicly solicited opinions from the society and proposed to implement university district enrollment. A system of teacher rotation is also implemented; Wuhan is also exploring a system of teacher rotation in compulsory education schools.

According to incomplete statistics, Hangzhou, Ningbo, Nanjing, Hefei and other cities have introduced relevant policies for school district housing.

There are frequent big moves, do you think the school district’s housing will cool down?