Shrimp that will "worse urine" after fishing in the South China Sea is very popular in Taishan, the hometown of overseas Chinese in Guangdong

Chinanews.com, Jiangmen, August 24th. Title: Shrimp that will "worse urine" after fishing in the South China Sea is very popular in Taishan, the hometown of overseas Chinese in Guangdong   Author Li Xiaochun Guo Jun   The summer fishing holiday in the South China Sea in 2021 has recently ended, and the seafood market in Taishan City, Guangdong has revived lively trading scenes. At the local Gu 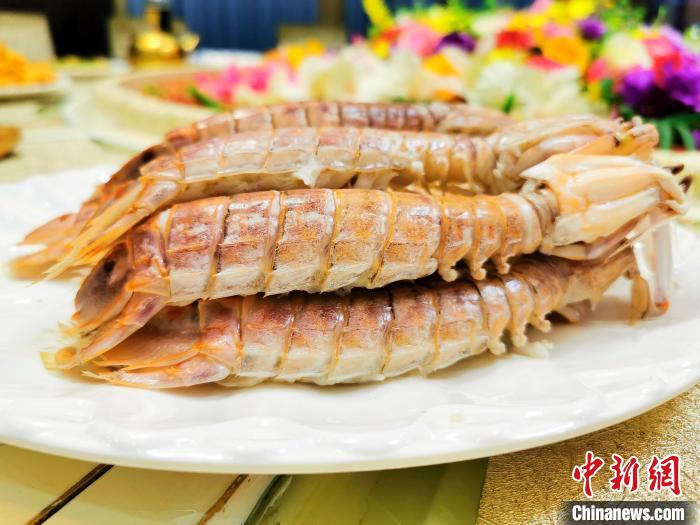 Chinanews.com, Jiangmen, August 24th. Title: Shrimp that will "worse urine" after fishing in the South China Sea is very popular in Taishan, the hometown of overseas Chinese in Guangdong

The summer fishing holiday in the South China Sea in 2021 has recently ended, and the seafood market in Taishan City, Guangdong has revived lively trading scenes.

At the local Guanghai Fisherman’s Wharf, which integrates wholesale and retail of seafood ingredients, catering, and tourism, there are endless numbers of customers who go to buy seafood, just to taste the first gift from the ocean after fishing.

It is understood that mantis shrimp is the collective name for multiple species of the genus Shrimp in the family Shrimpidae, because it ejects colorless liquid from its lower abdomen when it is frightened or caught (Taishan people use "manis urine" to describe this phenomenon). The name is mainly distributed in sediments or coral reefs in coastal waters.

It has a fierce temperament, sharp eyesight, and is good at swimming. It mostly preys on various kinds of shellfish, crabs, sea urchins and other bottom-dwelling creatures that are not good at swimming. It can easily destroy the outer hard shell of the prey and enjoy the meat in the shell.

A pair of powerful "mantis tongs" on the head are its main hunting weapons. The tail fan composed of tail limbs and tail sections is mainly used for digging holes and defending against enemies. Shrimp meat and paste mainly grow on the armor-like belly. Within the section.

"The fishermen in our village go out to sea and often catch mantis shrimps, but they are mainly small common species, about 10 cm long. The uncreamed ones taste sweeter, and the creamed ones taste more fragrant, just peeling the shells. It’s a bit hard work.” Uncle Lin from Naqinweijiao Village, Beidou Town, revealed that the dead mantis shrimps are not worth money and are prone to "flesh" (dry meat) in their shells. To avoid waste, local villagers will quickly remove The dead mantis shrimp is peeled and the meat is taken out, used for steaming eggs, or dried into mantis shrimp.

When the mantis shrimp is harvested, the roof of the fisherman’s house or the drying net in front of the house in Weijiao Village will become a special show for the second flavor enhancement of mantis shrimp meat under the action of the sun and sea breeze.

25 kg of fresh shrimp can only produce about 1 kg of dried mantis shrimp, with uniform strips and unique fragrance. It is one of the best collocation ingredients for the local fisherman's dish "dried seafood" in Taishan.

Most seafood restaurants or restaurants in Taishan have fresh and vigorous mantis shrimp in the fish pond for diners to choose from.

"After the fishing moratorium, the supply of mantis shrimp increased a lot, especially the'long-necked' mantis shrimp. Many diners rushed to it, and they felt that the'long-necked' mantis shrimp was here. The head is big enough, the meat is fresh and sweet, and it doesn't take much effort to peel the shell." Chen Weijie, the person in charge of the Iron Boat Restaurant in Chixi Town, said that diners like to go to the fish pond to choose fresh seafood such as mantis shrimp, and choose boiled water according to the restaurant's recommendation. , Salt water, salt and pepper, steaming and other methods for cooking.

The seafood market at Shanguanghai Fisherman’s Wharf reappears at the back of the opening of fishing. Photo by Li Xiaochun

"A friend once said,'Money is in hand, follow me, go to Taishan and see foreign houses.' In fact, Taishan not only has foreign houses, watchtowers, and arcades with the characteristics of the hometown of overseas Chinese, but also as an agricultural city and a coastal county-level city. It is also rich in rice, eel, blue crab, oysters and other national agricultural products with geographical indications. When I came to Taishan, I sat on the beach, listened to the sound of the waves, and ate seafood. This kind of fresh, sweet, tender and firm taste that is cooked right out of the water , You can’t enjoy it even in star-rated hotels in Guangzhou.” Recently, Ms. Liang, a Guangzhou diner who ate at a restaurant on Xiachuan Island, said while peeling mantis shrimp while introducing Taishan to her friend.

The creamy color of the mantis shrimp is attractive. Photo by Li Xiaochun

"The paste of mantis shrimp is called a "ge" by some Taishan people. It extends from the back to the tail. It is as thick as chopsticks and is pale yellow or orange. The darker the color, the more full the paste. Those with experience will look at the back of the shrimp. Or the inside of the tail fan to determine whether there is cream or full cream." Ms. Wu, a senior diner born in the 80s in Taishan, said that she and her mother like to eat mantis shrimp with cream, but it’s a good idea to choose one with or without cream. Personal dietary preference, the local seafood market mainly uses fresh mantis shrimp, and the "cream" or "long neck" mantis shrimp is the most popular. (End)