Ministry of Commerce: Improve the traditional consumption level and accelerate the cultivation of new types of consumption

Chinanews.com, August 23. "This epidemic has given birth to some new consumption models based on online consumption, and there are many innovations. Therefore, we must accelerate the cultivation of new types of consumption, including smart stores, contactless delivery, home-to-home services and other new formats. New model.” When it comes to topics such as how to promote consumption upgrades, Mi 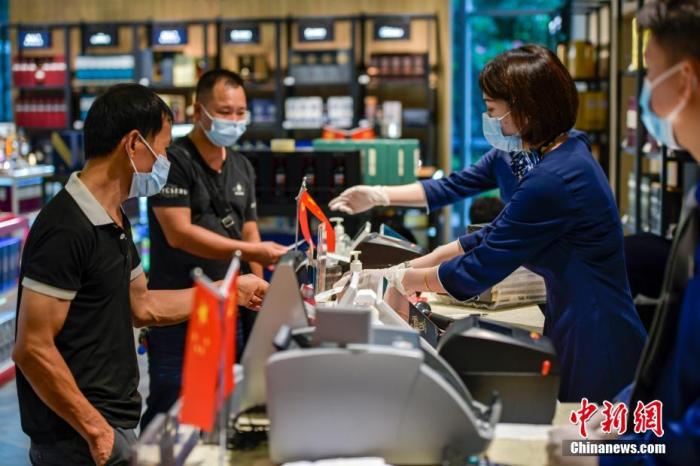 Chinanews.com, August 23. "This epidemic has given birth to some new consumption models based on online consumption, and there are many innovations. Therefore, we must accelerate the cultivation of new types of consumption, including smart stores, contactless delivery, home-to-home services and other new formats. New model.” When it comes to topics such as how to promote consumption upgrades, Minister of Commerce Wang Wentao answered on the 23rd.

Data map: The staff check out the customer.

The Information Office of the State Council held a press conference on the 23rd to introduce the situation of actively contributing business forces and striving to promote a well-off society in an all-round way.

At the meeting, a reporter asked questions and said that in the historical process from realizing food and clothing to an overall well-off society, and then building a well-off society in an all-round way, my country's consumption structure has changed from a subsistence and well-off society to a wealthy and enjoyable society.

How does the Ministry of Commerce promote consumption upgrades?

What other measures are there in the future?

In this regard, Wang Wentao said that consumption is an important engine of economic growth and also reflects people's demand for a better life.

Since the 18th National Congress of the Communist Party of China, the Ministry of Commerce has firmly implemented the strategy of expanding domestic demand. I have some statistics to take this opportunity to report with you.

In terms of scale, from 2012 to 2020, the total retail sales of consumer goods in my country will increase from 20.6 trillion to 39.2 trillion, an average annual growth rate of approximately 8.4%.

my country has become the world's second largest consumer market after the United States.

From a structural point of view, the consumption level and quality of life of the people have been greatly improved.

"As people's living standards continue to improve and the pace of consumption upgrades continues to accelerate, we see service consumption, new types of consumption such as digital, cultural, tourism, health and other consumption hotspots emerging in an endless stream, and some new formats and models of consumption are now The word'scene' is often used very fashionablely. Many different scenarios are innovating and emerging in endlessly."

Wang Wentao pointed out that the next step, the Ministry of Commerce must adapt to the consumption situation and work from three aspects.

One is to improve the traditional consumption level.

"We also encourage the recycling of home appliances and furniture in areas where conditions permit, the old-for-new trade-in, and support the catering industry to innovate business models, improve service quality, and further expand catering consumption. There is also the inheritance and innovation of time-honored brands and brand consumption, especially now that we are paying attention to new business formats. New models, including the'national consumption' that young people are very concerned about." Wang Wentao said.

The second is to accelerate the cultivation of new types of consumption.

The epidemic has spawned some new consumption models based on online consumption, and there are many innovations. Therefore, we must accelerate the cultivation of new types of consumption, including smart stores, contactless delivery, home services and other new business models and new models.

At the same time, traditional circulation companies are encouraged to create some new immersive, experiential, and interactive consumption scenarios.

"Sometimes when I go shopping in Beijing, I often find some new types of consumption that are exciting, especially refreshing. There are some online celebrity check-in points in some characteristic neighborhoods, and there are many innovations. These are new growth points, and they are full of vitality. ."

The third is to build a consumption upgrade platform.

Through the innovative development of the consumption platform and the combination of "points, lines and surfaces", the expansion of consumption is combined with the improvement of people's quality of life; the cultivation of international consumption centers, and now there are five cities in Shanghai, Beijing, Guangzhou, Tianjin and Chongqing; at the same time, It is also necessary to promote the transformation and upgrading of pedestrian streets with high quality, and develop characteristic business districts and characteristic neighborhoods.

Wang Wentao said that in May of this year, the Ministry of Commerce and relevant departments launched the National Consumption Promotion Month activities and the results were very good.