Chinanews client, Beijing, August 20th (Reporter Zhang Xu) Recently, 31-year-old entrepreneur Lin Wenqin died in a car accident after turning on the NOP piloting function on a highway while driving a Weilai car. The police have not yet announced the results of the investigation, while Wei Lai said that he would not speak up until the outcome of the incident.   No one thought that the owner of W 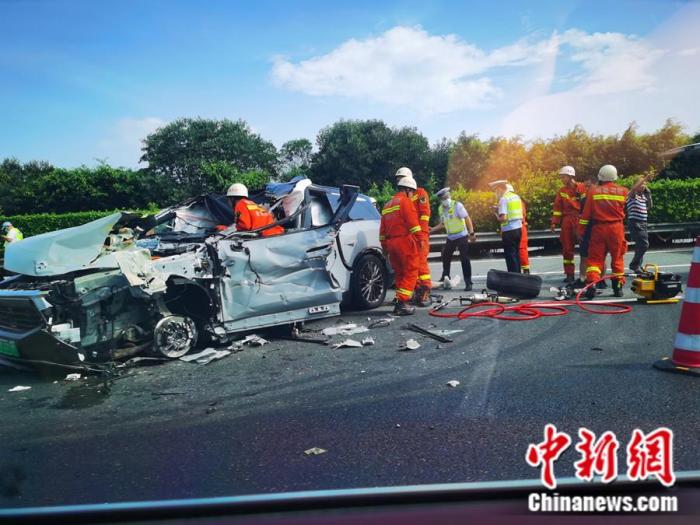 The police have not yet announced the results of the investigation, while Wei Lai said that he would not speak up until the outcome of the incident.

No one thought that the owner of Weilai made a sound.

The scene of the NIO ES8 car accident driven by Lin Wenqin.

The "Statement" also requires "the media to be fair and objective to win respect."

In other words, all auto-driving accidents with NIO are not a problem with the car.

If it is reported that there is a problem with autonomous driving, it will not receive "public respect."

No wonder there are opinions that Weilai's car owners have already "circulated a meal."

But this so-called NIO owner's "statement" was quickly countered by more NIO owners.

On the evening of August 18th, a car owner created the topic #反车主联合告# in the Weilai APP.

As of press time on the 19th, more than 7,000 people have participated in the topic.

Over 7000 people have participated in the topic.

In this topic, many users are opposed to being represented.

For example, "the great god Meng Fanjun" said: "I cannot be represented without knowing it, nor do they have the right to represent me."

There are also users who questioned: When buying a car, they did not receive a detailed professional introduction to the assisted driving system.

Therefore, the so-called "joint statement" that "does not mislead car owners" does not hold.

A reporter from China News Network found that the initiator of the "Joint Statement" was Lin Wei, the owner of the founding version of ES8, and Lin Wei was also the first and second user trust director of Weilai.

In response to the turbulent questioning, on the evening of August 18, Lin Wei issued a dynamic statement stating that the statement was accompanied by information about the signer, and did not represent the unsigned car owners, let alone "all car owners."

At the same time, it is a fact that the 500 people who voluntarily signed are the owners of NIO. They are all NIO owners.

In this regard, many users objected in the comment area: "It is wrong to not write the "500 car owners joint statement"." "The title is deliberately understood as all car owners."

Lawyer: The "joint declaration" is a non-authorized and invalid agency

Hu Keli, a lawyer of Beijing Yingke Law Firm, pointed out that this statement can only represent the signatory, not other car owners.

Lin Lihong, executive director of Beijing Quanyou Law Firm, entrusted by Lin Wenqin’s family, told reporters on Chinanews.com that “consumers have the right to know and businesses have the obligation to inform. 500 car owners have signed a joint statement saying that they have not been misled. Disclaimer. Under normal circumstances, the statement is signed by consumers to protect their own interests. Statements to safeguard the interests of businesses are very rare."

Currently, the Lin Wenqin accident is under investigation, and everything needs to be answered.

At the ES8 conference in December 2017, NIO CEO Li Bin focused on NIO’s automatic assisted driving technology, and said that “The mass-produced ES8 can free up the driver’s time by 50%, and the safety of the car for more than 50% of the time. Not worse than driving yourself."

Weilai Vice President Shen Fei once said on Weibo, "NIO Pliot is getting more and more addicted. At the end of the meeting at 1:30, I will be able to eat while driving with the help of auto-assisted driving." At present, this Weibo has been published. been deleted.

The Weibo of Shen Fei has been deleted.

Some car owners said that when they went to a Weilai store for a test drive, many staff members would leave the steering wheel with both hands when demonstrating assisted driving and let the vehicle take over.

These behaviors, coupled with the ambiguity in publicity and expression, will inevitably make consumers paralyzed while driving, and even lead to tragedies.

When the Lin Wenqin accident has not yet settled, the "Joint Statement of NIO Owners' Awareness of the NP/NOP System" encountered opposition from NIO owners, which undoubtedly caused a greater blow to NIO's brand image. What do you think about this matter? (Finish)